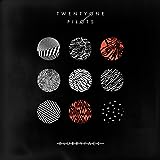 Ohh please don't kill me. Being a anxiety teenager, this
album's lyrical content is perfect for me. I know this album gets accused of
incohesive genre hopping, but seriously who cares if the album still is able to
maintain a theme and a central sound throughout. And if one more person accuses
them of being pretentious, my head WILL explode. I know I sound like a superfan
so far, but I just really like this album. It's such a gigantic improvement
upon Vessel, mainly because Tyler finally decided to not sound like a ten year
old. But the production is just so much heavier and substantial. This is a
classic I don't care what anyone else says.

Worst Track: Message Man (grew on me quite a bit recently
but still my least favorite)

I'm a sucker for anything synthpop, and Chvrches has
consistently put out some great synthpop over the past 4 years. I think I still
prefer the heavier synths and the punchier bass on TBOWYB but this
instrumentation is still damn good. Lauren's voice just has so much
personality. Martin's voice isn't anywhere near as good, but it's definitely better
here than the last album. I still can't decide if this is better than their
first album, but in the meantime, I can still enjoy pretty much all of the
songs here.

Best Tracks: Leave A Trace, Playing Dead, Keep You On My
Side, Never Ending Circles, High Enough To Carry You Over, Bury It, Empty
Threat

Worst Track: Down Side of Me

This album got me hooked quick. The instrumentation is layered with elements of classical and pop rock. Josh's voice has so much range and personality. Every song here is defined by his charisma. There are some truly joyous tracks with killer melodies, but Josh knows how to come back down for the more emotional tracks here. The vocal harmonies are spot on. There might be a few cheesy spots here, but those spots are inevitable when your album is imagined with such massive scope. As a complete concept, this album is incredible in almost every way.

Best Tracks: Astoria, One Love, This Means War, While You're
Young, Wildfire, Who Do You Love, Burning Up, Dearly Departed, End Of An Era

I must say, I'm pretty ambivalent on The xx, even
considering their critical acclaim. There just one of those bands I could never
get into. But it was never really because of the production. From the first time
I heard "Intro", I thought that Jamie xx could be interesting making
his own music. And we finally get the full finished product. Jamie xx's reverby
brand of EDM is very very nice on the ears. There are a few spots here where
the production gets monotonous and drab but it really doesn't last very long.
The guest appearance by the singers of The xx worked surprisingly well, as they
managed to inject some actual vocal personality into their respective tracks.
Looking forward to more solo work from this dude.

This is quite an interesting album. Not only is this album much more pop than Grimes' previous albums, this album is also much more exuberant and bombastic. I can't say this formula works every time, but it does give this album some unique characteristics. Grimes' doesn't have the best voice in the world, but there's enough personality for the melodies to work. Where this album shines is the production. It's a lot of fun to listen to. Whenever Grimes chooses bombastic production over bombastic vocals, it works really well. There a couple spots where her eccentric voice does go a bit too far, namely the song "Scream", which actually makes the song quite hard to listen to. Other than that though, this album is a welcome change in sound for Grimes. It's just a ton of fun.

It seems like everyone is going crazy for this album, and I can definitely see why. I love the new instrumentation. The jazz and funk elements make this album truly unique in the scene of modern hip hop. And no one is better than Kendrick at injecting some social conscience into his music. This was the right album at the right time. In a year riddled with police shootings and black activism, this album delivers its message masterfully without ever getting preachy. The only issue I take is that there are moments here where the production isn't as compelling as the lyrics. Otherwise, still a great album.

Best Tracks: King Kunta, Wesley's Theory, How Much A Dollar
Cost, Alright, The Blacker The Berry, These Walls, u, Institutionalized

Haha. I bet no one else though of this. I really enjoy
Little Mix's brand of pop. And although their albums at this point follow a
very obvious formula, this one in particular blew me away. This time around,
Little Mix decided to abandon the pseudo R&B from their album in favor
of a more 80's pop vibe. All of these girls can sing really, really well. And
they all have very distinct personalities. Although this album does have the
Syco Records production problem, the girls' talent manages to shine through. This
is an album stocked full of fantastic pop songs. Please get better a production
team next time, Simon Cowell.

Best Tracks: Love Me or Leave Me, I Love You, Weird People,
A.D.I.D.A.S, Love Me Like You, Black Magic, (I know, this song is Pretty
Girls esque but it makes me laugh every time I listen.

Not all of the album was my cup of tea, but I appreciate Carly's attempt to create something different and creative. I always thought Carly had a lot of vocal personality compared to her counterparts. And now, she finally got some production to back it up. The 80's call backs work here for the most part. There are quite a fair bit of questionable lyric choices. The production is easily the most distinct part of the album. It's demonstrates a retro yet dancable and relatable vibe. For the most part, I really enjoyed this. This is a very consistent album that rarely takes dips in quality.

Best Tracks: LA Hallucinations, Run Away With Me, Your Type, Boy Problems, Make The Most Of The Night, Emotion, I Really Like You (Lol, this song does actually work a lot better in
the context of the album)

Worst Track: All That

As a vocalist, Troye's got some room to grow. But this was a surprisingly solid debut album. There could've been more bombast, considering how melo the entire album was. But even considering that, this album is not boring. The lyrical themes combined with the layered production make this album unique. Troye should try to expand his range and his sound next time.

Best Tracks: Talk Me Down, Wild, The Quiet, Fools, Youth

Worst Track: Heaven ft. Betty Who (Ok this one is
actually boring)

10 Froot - Marina and the Diamonds

I like most of the production choices on this album. Marina has quite a nice voice as well. But I'm struggling to find things to say here. Most to all of the songs are good but none really stand out as great. Maybe this is a result of there only being one producer throughout the entire album. Most of the songs here are almost exactly the same tempo, and that gets a tiny bit grating after awhile. There's also a lack of bombast and energy. So far, this is all pretty negative, but that's all to highlight how much better this could have been. Marina has a great voice but nothing here is able to bring out it's true potential. Overall, I was pleasantly surprised but yet disappointed with this album.