Ten Album Recommendations To Get Into German Music, Ranked Alphabetically

This list is to give you a quick but somewhat accurate overview of what the German music scene is capable beyond the handful of songs that are known in other countries. To do that I picked a selection of 10 very different albums from all kinds of genres and eras, that in combination form a solid starter pack for your journey into Germany's music landscape. I hope I did a good job with that.
This list is a non-votable list and the content of the list reflects the opinion of its author. 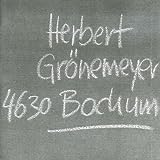 The third best selling album of all time in Germany (behind Grönemeyer’s own 2002 album “Mensch” and Phil Collins’ “...But Seriously”), ”4630 Bochum” may forever remain Germany’s greatest pop album. It’s a definite understatement calling it this genre, as the songs don’t just live from the catchiness, but from Grönemeyer’s massive songwriting craft, both his rich compositions and his poetic lyricism that finds the right words for complex phenomena. Songs like “Männer” (about the oddities of men) or “Flugzeuge I'm Bauch” (not unlikely the most un-cheesy and heartfelt breakup song out there) are classic tunes of the German language, but my personal favorite is the semi-title track “Bochum”, in which Grönemeyer appreciates his city, not only despite but because all of its flaws. The music is simply overwhelming.

Don’t let the cover fool you: this album has some really dark subject matter. After WW2, the German music landscape was widely dominated by the influence of the French chanson, which ultimately grew into schlager. Although not musically bad back then, the lyrics were usually set around light hearted topics and entertainment. On her first album, Alexandra was forced to sing such songs due to commercial interest of her label, which made her so depressed that she broke out in tears in the studio. On her second, self-titled album, she got creative freedom. The result is a record in which she explores territories that dwell on the most negative of feelings: besides her fine metaphoric poetry (choosing a cut down tree for the loss of a childhood friend, or a leaf’s journey through the wind as a substitute for hopes and dreams killed by harsh reality), the album was also very daring by addressing issues such as racism in art and, dressed in a haunting circus themed composition, the trauma suffered from child abuse. None of the 12 tunes will bring you happiness - but extremely high quality songwriting and chilling orchestration.
Unfortunately, it was also her final record, as she died in a car crash at age 27.

Die Toten Hosen is a legendary German punk band, and one of the best selling groups of all time in that country. It was this very album that raised their status from “an entertaining rock group” to “one of the greatest German bands”. “Ein kleines Bisschen Horrorschau” is a concept album based around the novel “A Clockwork Orange” that tells the story of Alex de Large. It expands on this idea by also characterizing a society in which work and efficiency is everything and self satisfaction is essentially dead, causing the youth to revolt. Despite classified as punk, the compositions are full and epic in tone, and also interpolate fragments of classical Beethoven compositions.

In the 90s and early 2000s, the popular German music landscape consisted mostly of copies of American trends, or eurodance. Boybands and girlgroups, teen pop and English language lyrics (that, essentially, quoted phrases heard in the US). But then, the combined success of Juli, Wir sind Helden and Silbermond caused a commercial boost for German language indie rock bands, with many, many copycats rising. The impact of this hype can still be felt in today’s German pop stars. “Es ist Juli” contains the biggest and most iconic hit of that era, “Perfekte Welle” (the media nicknamed this genre “Neue Deutsche Perfekte Welle” as a play on the 80s genre Neue Deutsche Welle), and some of the greatest tunes of it. It feels rougher and more casual than the songs by the other bands, and is devoid of clichés. It’s also one of the cases in which a band has exactly one really, really outstandingly great album and little to follow.

Konstantin Wecker is one of the most political figures in German music. He is a poet of literary quality (I’d go so far as saying he’s the German answer to Bob Dylan or Leonard Cohen) who makes songs dealing with social issues, tragic characters and his archenemy: Naziism. The wordings are of such a massive lyrical quality and are so deeply on point with their message that it’s goosebumps. Partly sung, partly spoken word, “Genug ist nicht genug” is a perfect example of his art. “Der alte Kaiser” is about an old emperor who has exploited his people to gain a luxurious life and becomes paranoid they would come to kill him. And the 9 minute epic “Willy” characterizes how in the post-love and peace-era one of the last people who truly believed in the ideas bravely faced a bunch of Nazis in a bar, only to be killed. These short descriptions don’t remotely capture the essence of his storytelling, in which he manages to convey the consensus of different worlds and societies and develop psychologically complex characters, but it’s just so get a brief impression.

In the 1980s, the Neue Deutsche Welle movement/genre became the core of German music that everything that came afterwards had to compete with. Heavy on synthesizers, with German language lyrics with a very typical hard to describe attitude between silliness and political power, and a certain punk-ish poppiness, the genre developed a distinctive sound that still remains a favorite of many Germans. “Ideal” by Ideal is widely regarded as the greatest NDW album, and often even one if the best German albums of all time (in 2010, the German edition of Rolling Stone named it the 6th greatest). It’s also a very good starting point to get into the early state of movement. It’s slightly more on the new wave than the synthie pop side, which might be in more comfortable territory for foreigners. Alternatively, you can always tune in any Nena record of the 80s.

If you want to get into German hip hop, I can’t recommend a better starting point than this album. When it got a big hype in 2013, it also brought me closer to the scene, and now I’m very deep into the subject matter. Shindy’s debut album is much lighter and not as sinister as most other leading figures in the genre, yet it contains some of the essential techniques, and it’s a good introduction to how flow, rhyme schemes and wordplay work in Germany, while the brutality of Bushido or the overwhelming complexity of Kollegah may be too extreme for starters. “N.W.A.” (stands for “nie wieder arbeiten”, in English “never work again”) is a laid back but qualitatively high first impression.

Probably not of common knowledge is that Germany has a fairly successful soul scene. Although in recent years he got publicity mainly due to his bizarre conspiracy theories, the best and biggest figure in that genre is without a doubt Xavier Naidoo. This man has soul in his voice, and he made some wonderful music over the years. His breakthrough came with the millionseller “Nicht von dieser Welt”, which was created in close cooperation with producers Moses Pelham and Martin Haas. It’s clear why it sparked such a successful career: the voice slides smoothly over the beats, showing a great sense for musicality, and inspiring lots of other artists after him.

Although often classified as Neue Deutsche Härte, Unheilig became famous with their emotive and often philosophic ballads about coping with death. But that’s not their full spectre. The music on “Puppenspiel”, their first success (peaking at number 13 on the charts with a gold certificate... the next record topped the charts and was awarded nine times platinum), ranges from poetic pop rock t to heavy NDH about a dark psyche to stomping techno beats to beautiful angsty ballads, all with very moving lyricism.

The inclusion of this record will surely cause an uproar from music loving German audiences, but for an accurate idea of the German music landscape schlager needs to be heard as well. The genre is the best selling of all in Germany, filling stadiums and going up to ten times platinum, but it’s still a genre that gets no love from music audiences, and many average people are embarrassed to like it. I don’t understand this sentiment - there’s nothing wrong with liking music, and there’s nothing truly hate-worthy about this style. In its essence, it’s very light and easily digestible pop music with simple melodies and lyrics about love. To me, this has every right to exist and with this amount of sales obviously many people find it appealing. Andrea Berg’s “Splitternackt” gives a good impression of what schlager is capable of and what not. Berg conveys relatable emotions such as romance, envy, desire and disappointment over immediately catchy beats. Most of the songs are okay, the title track is great.