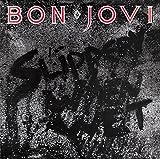 The album that sent Bon Jovi Commercial. after the low success rate of their Self Titled album in 1984 and 7800 Farenheight in 1985, Bon Jovi achieved world wide success with their 1986 album Slippery When Wet. With radio hit tracks including Livin On A Prayer, Wanted Dead Or Alive, Never Say Goodbye and Fan Favourites, Let It Rock, You Give Love A Bad Name, Raise Your Hands and Wild In The Streets, Its no surprise that Slippery When Wet is one of Glam Rocks best albums. - jpc1995

One of the best ever

Guns N Roses hold the record for the highest selling Debut album in rock history. Appetite For Destruction went #1 all over the world in 1987 and continued to stay at number throughout 1988 and 1989. This album features the "Classic" lineup of Guns N Roses Featuring Slash, Axl Rose, Izzy Stradlin, Duff Mckagen and Steve Adler. This album features classic radio hits Sweet Child O Mine and Paradise City, as well as Guns N' Roses fan favourites Welcome To The Jungle, It's So Easy, Nightrain, Rocket Queen, my Michelle and many more. - jpc1995

Can't get any better than Guns N' Roses with Slash - jpc1995

Calling one of the best hard rock debutes ever glam metal is an insult.

The Album that gave us Rocket, Animal, Love Bites, Pour Some Sugar On Me, Armageddon It and Hysteria, definitely Leppard were again on top of the world. After much success with High N Dry and Pyromania, definitely Leppard had again shown that pure, raw, hard Rock N Roll was still cool. - jpc1995

One of the best albums in music history, Hysteria deserves to be place at number one.

This album is too awesome to be underrated.

A great song and a great album. The Swedish rock band gave the world a fantastic album. with hits like Love Chaser, Rock The Night and The Final Countdown, Europe had achieved major success with their first multi platinum album and single. - jpc1995

After the success of "Look What The Cat Dragged In" in 1985, Poison's follow up album had to take a toll on the 80's American glam rock scene. sure enough with hits like Nothing But A Good Time, Fallen Angel, Your Mama don't Dance and Every Rose Has It's Thorn, Open Up And Say AH became and international success and put Poison on the world Map. - jpc1995

Jump, I'll Wait, Panama and Hot For The Teacher. any album with classics like these is destined for greatness. released in 1984, The Van Halen brothers again showed the world their talent. from high speed screaming guitar solos to quality songwriting and performance, Van Halen's 1984 album is an absolute classic. - jpc1995

Motley Crue's Dr Feelgood album became a popular product on the Sunset Strip in the late 80's. This features Crue classics Same Ol Situation, Dr Feelgood, Don't Go Away Mad and Kickstart My Heart and is the last album that features Vince Neil on vocals before his departure and return in 1997. The album's success rate sent the Crue on a 2 year world tour. A must have for hard rock fans. - jpc1995

8 The Number of the Beast - Iron Maiden

Iron Maiden, Metallica, Megadeth, Dio, and the other real metal bands, hated glam metal a lot
None of them should be on this list. They are too far from anything glam. They thought glam metal was a caricature of metal or gay version of metal and overall - that glam metal gave true metal a bad name. - Metal_Treasure

After Fronting Deep Purple, David Coverdale finally formed what would become "Whitesnake". after 6 commercially successful albums, Whitesnake released their self titled album. along side a massive tour, this album gave the world some of rocks greatest songs including Here I Go Again, Is This Love, Crying In The Rain and Still Of The Night. - jpc1995

Released in 1984, Metallica's second album Ride The Lightning gave the band some radio attention with hits Fade To Black and For Whom The Bell Tolls. Ride The Lightning became popular amongst the Glam Rock scene after the low success rate of their Thrash metal album Kill Em All in 1983. A good quality glam metal album with some mind blowing guitar work from Kirk Hammet and James Hetfield. - jpc1995

12 Shout at the Devil - Motley Crue

So many good tracks

19 Love is for Suckers - Twisted Sister