Just want to make this list depending on the outside and not the inside. This time, it's about 2019. Will it be remembered to have good album covers with awesome artwork, or will it be lame boring and also terrible artwork. Either way, that's how a year goes with the outside when you look at covers. Yeah i'm just playing with my mind. Here's the list.
The Top Ten
1 At The Edge Of Light - Steve Hackett 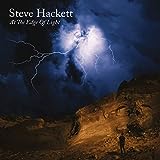 I like the lightning they added there. The way the environment looks and how dark it is just makes it look brilliant for a CD cover. Very epic.

3 Slaves of the Shadow Realm - Legion of the Damned

Now THIS is another great one. I like how epic it looks too. Just looking at it really does look like it's a cover of a metal album.

This album cover just screams retro 80s cheese, and I love it.

The artwork of that depressed boy really does get me. The person that drew this really is an artist.

Should've been a 2018 album, but it got delayed until this February.

I like that duplicate effect with one pink and one blue merging a bit close to each other. That's another brilliant work for an album cover.

I like that wall with the color fading effect and that guy right there working on something including with those things around him. It's great.

Great castle, great environment. I like how they put a lot of things epic in this album cover, it just makes me happy.

This is a list purely based on visuals... TTT could at least let you add covers on here.

15 The Sun Will Come Up, the Seasons Will Change - Nika Nesbitt
16 Gold & Grey - Baroness

Brilliant 2 dimension work they have done there. It's supposed to be a butterfly pulling a shape of a heart out of a wall and it's great.

WOAH! Now this is epic. Middle of a road, two people, car, FIRE! and it also has a thick white outline around it.

Nice artwork! Very creative too. Lion, flower, glass, all put together in one image doing some set up. It's brilliant.

23 Tip Of The Sphere - Cass McCombs

Brilliant artwork on that circle. I like the way it looks just by looking at it for long. It's like... wow!