The Amity Affliction is definitely my favourite band. Seeming as there's already a list for their best songs, I figured I'd make a list for the next best thing. Albums.
The Top Ten
1 Chasing Ghosts 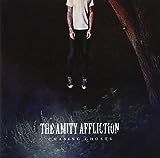 This album, is definitely my favourite by Amity. The lyrics are awesome and special. There's Chasing Ghosts, which is really fast and heavy. Open Letter, which is a beautifully written song and probably Amity's best to date. Pabst Blue Ribbon On Ice with an awesome piano riff and many other songs which are incredible too.

2 Let the Ocean Take Me

This album is put together fantastically. In the year of awful songs like Anaconda. Amity are able to put out an album which shows that music these days, isn't completely horrible and that there's still hope for the music industry. Pittsburgh is the perfect way to start off this album and Give It All is a perfect way to finish an album. Don't Lean On Me shows Amity's musicianship and The Weigh Down accomplishes this, too. Long story short, Let The Ocean Take Me is an incredible album and by far; the best of 2014.

The whole album is fantastic "don't lean on me" is easily the best song on the album. While you have a song like "Death's Hand" which Is the power and pump up song for the album. All together this is my person favorite album.

The friggen best thing ever. This album is a masterpiece, holding songs like don't lean on me.

This album is awesome. Awesome lyrics, drums, bass, guitar and vocals are combined to make the perfect album. Although I don't believe it beats Chasing Ghosts, I still love it. Songs like Anchors and I Hate Hartley are fan favourites. Youngbloods is an awesome title track and I Hate Hartley also starts the album off with a bang, making fans want to come back for more.

The joint best amity album along with severed ties and misery. Every song is an instant classic. My favorite amity song is on here as well : Olde English 800

Chasing Ghosts is good but Youngbloods is much better. Much more dynamic.

An awesome debut album for an awesome band. It's also a lot different to the other albums when it take into consideration the screaming. Listening to this album and then the rest, definitely shows how much more experienced Joel has become with screamo. I constantly find myself mashing the repeat button when listening to songs on this album. My personal favourite being B.D.K.I.A. F which I can't help but headbang to. Stairway To Hell is also fantastic despite not having a chorus. I can go on all day about how awesome the songs in this album are, but I'll just leave it at; Severed Ties is an incredible debut album for an incredible band.

This is in my top 3 amity albums. It's so solid it's amazing! For a first album as well. Really good and it's definitely worth a listen. Don't look past it cos it's the first. Fruity Lex

I love all their albums, but this one has a lot less of that studio edge to the cleans, while still being catchy. Glory days is a close second, but the cleans aren't very good.

5 This Could Be Heartbreak

Great album. My favorite is still Chasing Ghosts but this is probably my second favorite.

This is so haaard! All of their albums are super awesome. In the end, Chasing Ghosts, Youngbloods, LTOTM and TCBH are equal in my mind, Severed Ties being second by a close call. So I'm voting for the last, as it is 6th (?!?!?!? ).

I love this album. But it's just not as good as the rest. It has good songs and all, but I'd much rather listen to any of the studio albums.

I don't care what anyone says. This album is the best. Clearly joint with youngbloods and severed ties though. They tried something new and it's really good. Some of my favorite amity tracks are on this e.g Holier than Heaven, Drag the Lake and Misery. Such a great album and will never get the hate. People may finally be coming round though.

After years of making music and losing and gaining new members, The Amity Affliction are still going strong, Misery quickly made its way to my top 3 albums.
Also in changing their sound from their first album in a lot of ways, including having Joel Birch lower his screaming tone into a way of singing

8 Everyone Loves You... Once You Leave Them