Top Ten Albums Named after One of Their Songs' Lyrics

This list is about albums that were named after one of the lyrics from one of the songs within the album itself. Albums named after a song's title do not count: there are plenty of list for those albums already. With that in mind, please feel free to add to the list. If you do tell me which song the album's title comes from.
The Top Ten
1 Willy and the Poor Boys - Creedence Clearwater Revival 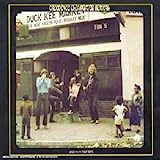 From the song Down on the Corner:
"Down on the corner, out in the street. Willy and the Poor Boys are playing, bring a nickel, tap your feet." It's about a bunch of kids who start a jug band and play music on the street corner for people passing by.

2 My Aim Is True - Elvis Costello

The title comes from the chorus in the song "Alison" (his first hit).

It comes from a line in "For Tomorrow": "Modern life, well it's rubbish." Close enough.

4 Hail to the Thief - Radiohead

The album title comes from the song "Walk On": "The only baggage you can bring is all that you can't leave behind".

6 Nighthawks at the Diner - Tom Waits

The album's title is the opening line to the song "Eggs and Sausage (in a Cadillac with Susan Michelson)".

7 The Dark Side of the Moon - Pink Floyd

From the song "Brain Damage". 'I'll see you on the dark side of the moon.'

The title is sung in the middle of the song "Washington Bullets". It's a reference to the Sandinista National Liberation Front, a socialist revolutionary movement in Nicaragua that overthrew the monarchy and controlled Nicaragua for 11 years.

The album title comes from the song "Jocko Homo". The phrase sums up the premise of the band's beliefs: everything in human society, including humanity itself, devolves.

Freddie Mercury yells out the phrase "Hot Space" in the song "Dancer" before Brian May does the guitar solo.

From the poem "The Dream". 'Live hand in hand, and together we'll stand on the threshold of a dream.'

The first verse of the opening track "Beast and the Harlot" mentions "A City of Evil", in reference to the song's themes about the fall of Babylon.

From the song Starlight. "Our hopes and expectations. Black holes and revelations"

The last lyric of the last song on this album, Raining Blood, says "Now I shall reign in blood! ".

16 End of the Century - The Ramones

This title comes from a line in the song "Do You Remember Rock and Roll Radio? ". The song criticized the state of the radio in the early 80s (it's been a problem for longer than you think) and takes a nostalgic look at how it used to be in the 60s.

From the song "High Hopes":
"The ringing of the division bell had begun..."

From the lead single and their biggest hit, "Come On Eileen".

In the song "Simmer", one of the lyrics says, "Wrap yourself in petals for armor".

20 From a Basement on the Hill - Elliott Smith

From the song "One Slip":
"A momentary lapse of reason
That binds a life for life..."