Vote for your favourite/top 30 Seconds To Mars album.
The Top Ten
1 30 Seconds to Mars 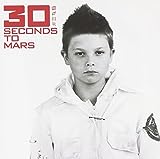 When I first heard that Jared Leto had a band that was actually getting some airtime, I'll admit I was skeptical. After all most actors-turned-musicians usually only receive any level of notoriety on their name alone; however, after hearing Capricorn for the first time, I immediately went to the record store and bought this album. Simply put, it blew me away. I mean, I never skipped a single track. While somehow managing to find a perfect balance between a sort of progressive, celestial elegance and unpolished garage band-colored rock, its sheer originality at a time when the mass-produced garbage of the post-nu metal era makes this gem one of the best rock albums of that decade, and in my opinion, still one of the best of the millennium. Unfortunately, as I'm not really a fan of emo, screamo etc., which seemed to, at the very least, influence their later albums, I can't say the same for any of their material produced since. Kids, if your first impression of 30 Seconds to Mars came in ...more

Let Me Review... This Album Is Not Perfect... It has not perfect songs (except Oblivion maybe) like on Beautiful Lie (Attack, Was It Dream) or This Is War ( SIASL, NOTH) - but it has perfect MOMENTS ON SONGS perfect parts of songs - like the short bass interlude on Mission, like the final long scream on Buddha For Mary or the ambient synth-vocal parts of Echelon, OR THE "cross the line" scream on 93 Million Miles... But lately you will find that it will GROW on you all these tracks... And the album... And you will like it all. Beautiful Lie>30 Seconds To Mars>This Is War>Lust Love Faith (disappointment)

I bought this album the week it came out in like 1999 or so, after hearing 93 million miles, I wAs in West Edmonton mall HMV and surprised that is was $9.99 new! Must have been an HMV promo or maybe Jared Leto decided he wanted everyone to hear they're great new sound. Crazy story, while buying the album at the counter the teller told me they (30 STM) were playing live in the mall at thAt moment! I bought the album and ran to the location. (For those who know about West Edmonton Mall, it's known as being one of the biggest malls in the world, at least in the 90's. They were playing live in the arcade and when I got there they were just walking off stage, I missed it! None the less, I got the album, absolutely Loved/Love it. I also worked at a radio station at the time and was able to broadcast some songs through the station to locals in my hometown (Hay River, NWT) nobody seemed to care, that was when I decided to choose music over "friends" honestly music you love is way more ...more

This along with A Beautiful Lie are on another planet compared to the pathetic This Is War. I was very disappointed in Mars after that lazy, radio friendly, pop effort. I didn't expect that from a Metal/Hard Rock band. At least it's not as bad as Linkin Park's new album... What I'm more disappointed in is the amount of votes it's getting, it doesn't deserve HALF the votes this has let alone WAY more. Stupid, stupid fans. I miss the old days. 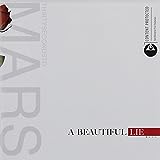 This is barely better than their first album. There is one song on this album I don't really like, and none on their first album that I don't like. But this album has more songs so in my opinion it's better. There is 10 great songs in both albums and one mediocre song on ABL where as TSTM doesn't have an 11th song at all. This is war has some really amazing songs as well, but no enough of them for me to consider it their best album. Love lust Faith and Dreams is a very different style but still great. Oblivion though... It's such a good song. It is almost a tie between ABL and TSTM. But ABL is a bit better overall.

This one is the best. Love Lust Faith and Dreams is a close second though, mostly because of Up in the Air, Convergence, and Conquistador. But holy crap this album is good. There are no bad songs in this album and I absolutely love about 6 of them. This is when the band was at their best. They did lose their basist, which sucks but they still manage to make amazing music. This is their best work though.

Plain and simple. This was 30 Seconds to Mars at the height of their powers. It all started going downhill slowly when their bassist, Matt, left the band shortly after the tour for this album was over. So many great songs filled with angst, passion, pleasure and pain. By far and away their best work.

Ridiculous list. This album features:
The Kill, From Yesterday, A Beautiful Lie, Attack, Battle Of One, The Fantasy, The Story, R-Evolve, A Modern Myth, Was It A Dream? And Savior. That's 11 of the best songs this band has ever produced. TIW has 2 good songs, the debut album has like 10. This should be top, the first album 2nd and TIW WAY behind in 3rd. 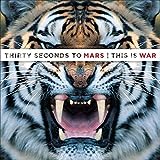 The first 30 seconds to mars song I ever heard was this is war and then a week later I heard closer to the edge, that's what made me buy the album and what made me fall in love with the band, so even though I love them all this will always be my favorite.

It doesn't compare to the strong guitar riffs that are in 'A beautiful lie' but the album has brilliant songs that stick in your head like hurricane with that amazing Jared's voice plus closer to the edge,this is war,vox populi and night of a hunter. The choir also complements 100 suns. This album is more about the lyrics.

I really love this album, maybe because I had discovered 30' with "This is War". I love "Hurricane", "Kings and Quenn", "Vox Populi" and "This is war". All of the songs were great in shows. I really love "A beautiful lie" and "30 seconds to mars" but it's my favorite!

I love like all the songs on this album. I like this is war, alibi, hurricane, closer to the edge, Kings and Queens. I fell in love with them because of this album. 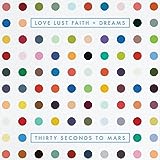 I can't explain how dissapointed I'm, awful album, doesn't even get closer to the glory past years, almost it's a entire acoustic album. I only save 2 songs up in the air and city of angels but after that... No words

Amazing to listen but when you understand it's meaning you feel.. What, like you are singing to whom? And you feel like it's evil some how

It's the best, Up in the Air, is probably the best song they've made 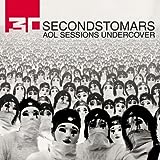 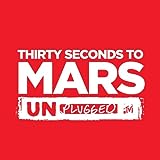 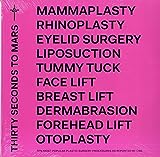