1 Toys in the Attic 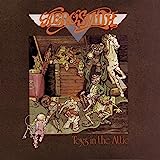 My god, toys in the attic kills! Toys in the attic kicks off the first song, then the rest come great specially sweet emotion, walk this way, and big ten inch record. You see me crying was a good way to end the album.

Such a CLASSIC ALBUM! Pump was the album that got me into Aerosmith, but his one REALLY got me into it. Although really, really overplayed, "walk this way" is a great song, and so are all the other ones... my favorites are "Toys In The Attic" and "Sweet Emotion. " this album shows just how ' awesome aerosmith really is!

Grew up listening to this one. Great album but favorite song comes from Get your wings-Same old song and dance.

Every single song on this album is great! Sweet Emotion is the best. This album's almost as great as a Zeppelin album (and that's hard for me to admit, as a die hard Led Zeppelin fan)!

At first, I thought this album was severly overrated. Now, I think it's definitely their best.

This album is much like a,"Toys in the attic-volume 2", but Rocks has even a bit more creative and solid songs from A-Z. - This has to be one of the best and finest rock albums ever made.

Rocks - The Best Aerosmith Album!
Probably in the top ten of all 70’s Rock Albums!

Toys is a great Top 40 album, but Rocks out rocks it hands down! Every song is kick ass. My favorites in order. Nope! Can't do it. Each one is better than the other.

An album for the ages

This should be third to Rocks and Toys, only because it contains hands down the best cover of any song ever covered. Train Kept a Rollin' may be their crowning jewel.

Come on listen to S.O.S. or Woman Of The World. Class A songs. Then of course you have Lord Of The Thighs and Pandora's Box, Two Classics. And The Big Hits. The Encore to every show, Train Kept A' Rollin and then the album starter, Same Old Song And Dance, the best horns section ever put in a rock song

It's a tough call to pick just one, but Lord of the Thighs is an awesome, underrated tune.

Should easily be rocks, then this one. Every tune is great.. No one even mentions "spaced" or "seasons of whither" from this album... That's just crazy.

Honestly, this is probably my least favorite of their albums from the 70s (even lower than Night in the Ruts in my opinion) but it's still really strong. Obviously you have their biggest hit song on this album, as well as a few heavy hitters like "Mama Kin," "Walkin' the Dog," and "Write Me a Letter." And my favorite on the album is "Movin' Out." 4/5 stars from me.

This albums is their most underestimated one. All of the songs simply rock here. Listen to the different styles and tempos. Love it the most

I love this album. It's raw, Tyler's voice is great. One Way Street is one of their best. I also really like the next three, but this one is my favorite.

Have to rate this number one. Brings back memories of first time I heard it (an 8-track tape) in the high school parking lot blasting from my Mustang Fastback.

The same level of high quality as Toys in the Attic's high points, the same consistency of material as Rocks, and the beautiful sound quality and variety of the eighties material? Pump is easily Aerosmith's best release.

Just a real feel good album, the fact that's its not the hard classic rock, early, before they started getting help song writing is irrelevant, when I stick pump on I can't help but groove to it, makes me smile, makes me dance

A classic. The Best Of album that doesn't include "Toys In the Attic" hits! Janie's Got a Gun is its best!

Pump is superb album. Just listen to it and you will enjoy this beautiful journey of awesome songs

This album is very complete full of great songs, with magic touch or hangman jury and also dude looks like a lady, this album is a pleasure to listen through from beginning to end. A must have if you like Aerosmith

I vote for this album because it has my all time favorite Aerosmith song "Angel". Plus I love "ude (Looks Like a Lady)", "Hangman Jury", "Rag Doll" and others

I love this album! It has so many great songs such as Angel, Rag Doll, & Dude (Looks Like A Lady)!

This album got a fresh sound. It has my favourite Aerosmith song ever: "Magic touch".

7 Night in the Ruts

Many people, including Rolling Stone, have rated this album as unfavorable, but I disagree. My father has this on a cd and a record album. I have listened to the cd hundreds of times and I love it. There is not a single track on the whole album that I don't like. It deserves a higher spot on the list. It's not a crappy album, it's a good album!

I think that ruts is way under rated for one thing every song on the record tears it up this was my era of music from no surprise to think about it, these songs just plain crank and this when they were messed up on all kinds of cocain an booze they ripped it up then they tear it up now crankin in brewer Maine.

Other than the lame Shirelles cover Walking in the Sand. This album really kicks ass.

Totally Underrated, Give it a Listen!

Ok, what is this doing here? Yeah sure, this album only had one popular song, but the others are just as good. Eat The Rich, Get A Grip, Fever, Flesh, Walk On Down, Shut Up And Dance, and Line Up. Let's not forget Gotta Love It, which is one of their lost underrated songs ever.

Known for three ballads Cryin', Crazy, and Amazing. It also has the hard rock hits Eat The Rich and Livin' On The Edge.

I grew up on this album. Livin' On The Edge is one of my favorite songs of all time, not that you'll go wrong with any on this one.

With classics such as fever and walk on down, this album kicks ass!

It had a few good classic tunes, but other than that a very disappointing album.

Draw the Line rocks from start to end. The title track is great!

Great cover but only a few good songs. Murky production plus Joe saved good songs for The Joe Perry Project.

I love this album! The cover is cool also...

All the songs from this album are just great. The worst is Fallen Angels, but are the other songs rock: Nine Lives, Falling in Love (Is So Hard on the Knees), Hole in My Soul, Taste of India, Full Circle, Something's Gotta Give...

Most critics hated it, but it's nice to see that the fans love it. Truly is full of energy, and is very different from anything the band has recorded then and since.

This is one of their more head-banging albums and it's pretty good. When I was in middle school I had Nine Lives playing in my head almost all the time. It's killer!

Definitely my favourite and the one that introduced me to them. The self titled track was also in the intro to Dead or Alive 3

This album deserves more credit. I have listened to the whole album on YouTube a few times and I love it. Totally Aerosmith! Anyone who would call this unfavorable doesn't know what they're talking about.

Truly believe this album should be top 5. Straight raw rock people have no idea about this album damn shame.

What Done With Mirrors? No way!
Yes! This album earns the number ten spot, because it was when Aerosmith got back together after the break up.

By far my favourite Aerosmith album. Really turned a new corner with this album. I wish they had followed it up. Love the artwork and videos also

This is one of my favorite album of aerosmith my favorite songs is fly away from here, sunshine, jaded and under my skin.

A little to Grown up sounding to me.

I think it's favorable if it's given a chance. I have it and I love it! My favorite songs on the album are Jailbait, Lightning Strikes, and Rock in a Hard Place (Cheshire Cat). Aerosmith is awesome!

Some awesome guitar riffs and some gutsy vocals from Tyler who was obviously chemically impaired. I loved the whole album. Much better than the ballad crap they put out later.

Jailbait Is Great! I think it's a good album

Awesome this is the first aerosmith album I brought and I love it. Aerosmith live is better than there studio albums and that's because they play the songs better

this album has so much flare compared to their other live albums.

Mother popcorn is my hit from this album.

Always cracks me up when people say "why is this album down here, it has all their best songs" when referring to compilation albums...if you can't answer that question you just don't get these type of polls

This has many great tracks, including some unreleased tracks. I have it and I love it!

Why is this down here? I also couldn't find A Little South of Sanity on here, so this is my choice. It has a lot of the best hits. Wow. O_o Just wow.

Another good collection of aerosmith

Honkin' on bobo is sure one of my favorite Aerosmith album. Baby please don't go and stop messin around are the greatest. I think I really love it because' there's a lot of harmonica in

Aerosmith why make a blues album you have so mutch other blues songs like mother popcorn. but I like ther sound inn the album

17 Music From Another Dimension

Kinda disappointed in this album. Street Jesus and Beautiful are awesome songs. Legendary child is a decent song, but the rest isn't so great. Lover a lot, love X and the ballads are so cheesy and lame.. Nine lives is way better in my opinion

It was my first Aerosmith album and I love it! Just because they don't sound the same as they did in the 70's is alright there great no matter what.

18 A Little South of Sanity

This is a good live album

Love me two times is the onely good one

22 Tough Love: Best Of The Ballads

Never seen this before

Their mostly a Rock and Roll band, why ballads...BS

23 Devil's Got a New Disguise

BAD don't care...not at all classic

This album have god collection of aerosmith. their other songs are good but don't have aerosmith feling

Well, not much to say except it has all their greatest hits 😂