Best Albums of the 21st Century 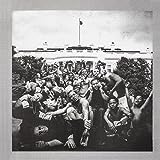 This album is simply unbelievable. The production, the features, the lyricism, everything. With the exception of Hell Of A Life, every song on here is, in one way or another, incredible.

3 Back to Black - Amy Winehouse

It's funny how an album from 18 years ago represents me better as a teenager than today's music. If you are under 23 years old you should definitely listen to it.
As Julian Casablancas said in an interview before the album came out "with our music we look for something that complements your mood, something that is almost like a friend sometimes"

5 Dream With Me - Jackie Evancho

This album deservedly went gold, and it made Jackie the youngest person to have an album hit the #2 spot on Billboard. It still sells today, as more people are discovering Jackie for the first time, five years later. Because Jackie attends her local high school, she doesn't tour as much as adult, full-time singers - but the loyalty of her fans runs deep.

Can't wait for her new album due latter this year. I am 64 years old, and have never had a singer effect me like Jackie does. She reaches right into your heart and touches it like an angel.

I just love listening to this album. The duets with Streisand and Boyle are nice, but I prefer when it is just when just her voice is on the track.

Most albums have 3 or 4 great songs.
On Dream With Me, every track is a masterpiece.
Jackie has an amazing voice!

Just a funny thing that TWO LP albums are above this experimental masterpiece. Probably people listen to singles first then the album, but Radiohead had taken a giant leap in their musical journey, from art rock to electronic. First listen might evoke some what comments, but it's not a rock album, it's an electronic masterpiece. Using electronics extensively without sounding like EDM. That's what we're missing now in the electronic music industry. All music is made for dancing, not to listen alone. The extensive use of effects has prevented to explore complexity in this genre. There's the repetitive thing (the National Anthem bassline and the piano groove in Everything In Its Right Place, the two memorable tracks for me of this album), but Radiohead had intricately spun a beautiful spiderweb over the "groove", both lyrically and musically. That there are no singles makes us to listen this album as a journey, and you can't take a sneakpeek of a journey in life.

How is Linkin Park ahead of this? I don't people really realize what this album did for music overall, an highly experimental masterpiece.

Everything in its right place- Takes you into the dark world that is kid a, with a nice soft sound preparing you for whats to come

Kid A- Although no my favorite song, it still has that trippy vibe in an scary lullaby form.

The National Anthem- Complete chaos in its structure, using weird eletronic instruments from the 1920s swirling you. The only thing keeping you grounded is the stable bassline of Colin Greenwood.

How to disappear Completely- Wow, that's all I can say, the lyrics of Thom Yorke "I'm not here, this isn't happening" really its you with his delivery. This is the most beautiful and human song on this album with the guitar the organ that sounds like it's taking you away from here.

Treefingers- just I lovely sounding ambient sounds surrounding you, calming you after the heartbreak you have just ...more

One of the greatest albums ever made. Period. It's also a fantastic gateway into more obscure, overlooked, and awesome genres like ambient, IDM, downbeat, vaporwave (and not just that one mac plus meme song).

Amazing! All four of the Linkin Park albums on the Top 10! Anyway, Hybrid Theory Diserves it 10/10. Meteora was also awesome, I give it 10/10. A Thousand Suns was not their best album I give it 6/10. Minutes to Midnight was also good. For me it was a 8/10. Linkin Park is not only one of the best rock bands of all time but one of the best bands in the world.

If people die without getting taste of this album their life is incomplete. This is the birth of Linkin Park. Hybrid theory opened my eyes and arised my music style no album can break this record lp forever

Its just that kinda music you can sit down and listen to! ANYONE CAN! and then you have the beloved Mike Shinoda And Chester Bennington!

Go Linkin Park, Hybrid Theory is the best album in the century, Jackie Evancho is a little girl yet.

Jackie shows incredible versatility on this album, from the ethereal "Vocalise" (Rachmaninoff) to the somber "Rains of Castamere" to the inspiring "Made to Dream" to a fine rendition of U2's "With or Without You" and more. Jackie has succeeded in creating an even bigger tent for Classical Crossover.

Don't often get to watch an emerging star from age 10 developing and improving,
Jackie now 14 gets better every year.
Quite amazing to witness this happening in real time!
She could be the next Judy Garland.

The Rains Of Castamere shows how incredibly her voice is maturing.

A beautiful album, Jackie's version of What a Wonderful World is the best I have heard!

I love this album!
She even makes dumb songs sound sweet!

She's not that good of a singer.

14 Lift Your Skinny Fists Like Antennas to Heaven - Godspeed You! Black Emperor

Are you joking? American Idiot on 22. It's unbelievable. It's such a nice album. It doesn't deserve this place.

Guys jackie evancho isn't god but this is amazing! Every single song is sheer perfection,!

Really? Is the best album, with 5 stars this album is Just...Perfect

16 Whatever People Say I Am, That's What I'm Not - Arctic Monkeys

This is one of David Bowie's best albums. It' all based on his death, as an art form.

This album is the purest, most uncensored version of Eminem we have ever seen, and probably ever will see. Before he became obsess with rapping quickly and thinking he's a rap god, he wrote songs with substance in them, some of the substance being illegal.

What? THIS AT #28?!?! You guys don't know how much better this album is than any other album

Best album of all time.

Such a powerful and beautiful album, all the songs connect and are amazing, Dear Agony is a very special and brilliant album