Amon Amarth is a Melodic Death Metal/Viking Metal band from Sweden formed in 1992. Their lyrics are about Vikings and the Norse Pantheon.
The band comprises vocalist Johan Hegg, guitarists Olavi Mikkonen and Johan Söderberg, bassist Ted Lundström and drummer Fredrik Andersson.
Amon Amarth has released 8 studio albums and 2 EPs, to date.
The Top Ten
1 Twilight of the Thunder God 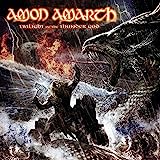 The first Amon Amarth album I heard. The first three songs are amazing. I love the growly bit right before he says free will sacrifice, and the narrative on guardians of Asgaard.

Overrated. Versus the World is a much better album, and so is With Oden On Our Side. Probably at the top because 1. It's overrated 2. People haven't heard VTS or WOOOS or 3. It's judged of the the title track and Guardians of Asgaard

They get their history muttled up a bit but their music and performances are amazing. Go you Vikings Go!

Incredible album. Not a single weak point I can think of.

"What is jomsviking doing as the worst? Anyone care to explain? "
-> It is new so was added long time after the list was created, thus the other albums got votes before this one was in the list.

Best melodic death metal band in the world continues to dominate the charts! This album tells the best story in all of metal in my humble opinion.

Absolutely love this album. My favorite AA albums rotate between Jomsviking, With Oden on Our Side and Twilight of the Thunder God. Just a great concept album

3 With Oden On Our Side

I love this album and it is one of the best death metal albums I've heard. The first song is average but every song after that is a beautifully arranged, classic death metal tune with overlapping melodies getting shoved right in your face. The title track is the best song.

After the songs 'Pursuit of Vikings' and 'Death in Fire' the first full album I heard and still their best up to date. The following four all lack in something this album certainly has. I may describe it as the "vibe". All nine songs are just amazing, I wouldn't get tired of them.

The production is unique and the riffs are amazing. Not a single disappointing song on the entire album. Has a powerful Nordic feel to it that some of the other albums don't capture as well.

Basically my favorite album without any doubt.
All the songs have great riffs, awesome screams, and everything I would love from an Amon Amarth Album. This album can get me hyped up and headbanging like nothing else

Surtur Rising is awesome and it has some of my favorite songs from AA, Wrath Of The Norsemen, War Of The Gods and Destroyer Of The Universe. I think they've left this album behind, so sad they don't play it live. But war of the gods is so good!

Honestly this and Twilight are the top two in my opinion but all of them are awesome so take your pick.

It's the absolute perfect balance of showcasing talent, playing heavy, and being epic.

Can't stop listening to these songs! The music is magnificent and the lyrics go perfect with it! Best album

Not just one of the best AA albums, one of the best extreme metal albums ever. Defined Amons current sound with thickly layered guitars, switching between epic and somber songwriting and highly dynamic vocal lines. This album could get you prepared for heated battle.

Every song is a masterpiece. The guitar ton of this album is my all time favorite, it's just some damn metal. With Odin on our Side is a close second for me.

I've listened to AA for a year now, my list has been changing over the months. now I have settled for this as my top 3 right here:
1. with oden on our side
2. twilight of the thunder god
3. versus the world

Where Silent Gods Stand Guard is my favourite song from the band. This has to be their best album.

6 Deceiver of the Gods

This should be higher, I think a lot of people just haven't heard it yet. It's definitely one of their best albums rivaling With Oden On Our Side and Twilight Of The Thunder God. These last 4 albums have just been epic. It's a bit more thrashy than the rest but just as epic.

Amon Amarth is one of those bands that does the same thing for every album but never gets old. Unlike most bands, however, their 9th album actually manages to successfully fulfill that formula and maybe add a little something enw...

Their best album in my humble opinion. This one just has more for me. Meaning that the songs just feel right and the heaviness is just right. That epic feel is all there. Head bang to this album.

As Loke Falls has given mr goosebumps the first time I heard it. Father of the wolf and the title track are simply masterpieces

7 Once Sent from the Golden Hall

Not so long ago I voted for Jomsvikings before I listened to this. Seeing how criminally low it is placed on the list, I think this album deserves top 4, and yes, jomsvikings must get out of the top 5

Victorious March and Once Sent From The Golden Hall alone are enough to put this really high up. Throw in the rest of this masterpiece and you easily have one of the best albums ever.

It has some of GREAT GREAT songs...some of their best songs to be honest..like:
Victorious march
The dragons' flight across the waves
Without fear

I have nothing but good things to say about this album. It sounds really good, heavy and melodic. The guitar work is fantastic just like the drums and the bass. The first song, Fafner's Gold, is an incredible song and it sets the tone for the rest of the album perfectly. A lot of the songs are absolute jems like "Mjolner, Hammer of Thor", "The Berserker at Stamford Bridge" and "Wings of Eagles" along with "Valkyria", "Ironside" and "Into the Dark" which has very nice piano parts in it. Overall, this is really one of Amon Amarth's best albums and they never disappoint as always!

Berserker has all that I need. I like Crack The Sky as a live song a lot. Valkyria has a beautiful piano ending. But my favorite is The Berserker At Stamford Bridge, I just like the heaviness.

I bought and listened to the entire thing and It easily became one of my favorite albums! It's so heavy and melodic.

I love it! It's one of Amon Amarth's best albums.

I think this should be higher, it's better than Vs the World, Deciever and Golden Hall and it contains The Pursuit of Vikings which is easily one of their best songs.

A Great Melodic Metal Album, it has great songs: The Fates Of Norms, The Pursuit, Once Sealed In Blood. Definitely one of my favorites

I don't really understand how this is so low, easily a top 5 album of theirs (I would say top 3)

The album is very raw, heavy and fast paced. The track list is excellent and included early Amon Amarth epics like "Bleed for Ancient Gods" and "Last of Pagan Blood". Great album.

I love the speed and energy of this one, and I've overplayed 'North Sea Storm' just for that solo more times than I can count.

The Contenders
11 The Crusher

15 The Arrival of the Fimbul Winter (EP)
BAdd New Item