MLPFan I know, Izumo isn't a hated character but she's pretty underrated and the anime (for now. And I'm not including the manga) seems to almost always portray her poorly. They always make her act like Rainbow Dash from MLP for no apparent reason. She'd always be shown batching (censored) or insulting Bon. Whereas Shiemi has always been shown to be a happy, nice girl. I also like Shiemi, but I just like Izumo better. Both characters were great, but the difference is that one is loved by the fandoms and generally liked by the other characters while the other one gets very few recgonition and is generally hated (or at least disliked) by the other characters. I think both characters should be treated equally, at least by the fandom

" If anything, she is more useful than that Izumo batch." (Censor. The original comment can be found here)
I was on the annoying female list, and I found Shiemi on the list. Let me get this all straight. Izumo is just a "side character". That's why she gets less screentime than Shiemi. And THAT'S why she seemed less useful. Do you guys remember that attack on the train to Kyoto? And the fire? Who put the fire out? Izumo did. And while the latest arc in the manga I've read is the Kraken arc, I heard that Izumo's backstory would be told around the illuminati arc. I'm not offending the person who wrote the comment, but still.

Also, Is It just me or they would usually portray Izumo as a snobby alpha batch(censor). Even her bio in the manga made her sound like some stereotypical teenybopper. While she may seemed like a jerk, especially to Shiemi who she treated like her servant. She gradually turned better. Like when Izumo was stuck on that demon in Kyoto and Shiemi tried to help Izumo out to the point she made nii~chan a giant. Izumo screamed out to Shiemi that she should just leave her there after how she treated Shiemi. I mean, If she still treated Shiemi like her slave, she'd yell at Shiemi to help her, Instead Shiemi helped Izumo with her own will!

Also, I think It's worth mentioning how Izumo was the only one who doesn't avoid Rin after learning that he's the son of satan. She even sat with him during their trip to Kyoto whereas everyone else avoided him.

And the whole "alpha batch" (censor) thing? If she was, then why does she try to protect Paku? And that she was sad when Paku left the exorcist cram school? It was because she didn't have any other friends. And Paku was the only one who wanted to befriend her when they were kids. The kids at her elementary school were bullying her. She wanted to protect the only person who wanted to be friends with her!

Izumo is more of a jerk with a heart of gold over the typical alpha batch everyone would love to hate on nonetheless. She also has some really cool familiars 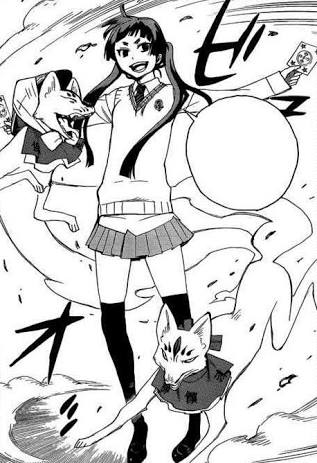 Mike and Uke are cute in my opinion 😊
And the polkabrow thing is hillarious! But her face looks kinda weird in this picture.

She still acts like a jerk to others, but not as much as she used too. And she became less annoying nowadays. My personal favourite pat where she insults Bon would be the one on the beach (in the manga). She called him a gorrila.

Honestly I think that Izumo needs to get more attention. But no, I don't really ship her with anyone yet.

She's the smart tsundere character of the show/manga. She's a top student in the exorcist cram school and is the smartest of her class. But she acts harsh and belittles others. Kind of like RD from MLP. But not a jerk like RD. Later on, you might get hints that she Isn't a bad person and behaved like that because she had reasons such as her bad past or how she was bullied as a child. She saw her mom kill all of the Inari priests, was held hostage by the iluminati with her sister under false protection, saw someone else get executed, lost her sister, ran away alone, and so on. And when she met her sister after being separated for so many years, her sister doesn't remember her :( - MLPFan (9/6/2017)

Why Is It Named 'Durarara!!' Another dumb Sayaka Maizono rant My Try On Making A Mary Sue How I added Images To My Posts My rant about my fake best friend IRL My Sayaka Maizono Rant By 'Popular, Good Looking, smart, etc' I mean something like this.. MLPFan Reviews - Mika Koizumi (OC Character) MLPFan's Rant About Lego Friends(Both toy franchise and related series) MLPFan Reviews:Lavender Town Syndrome(CreepyPasta)