The Top Ten
1 Slippery When Wet 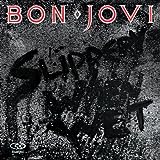 "It's mainly good because of Livin' on a Prayer and You give Love a bad name. The other albums are good but this album contains my 2 favorite songs!

The one that introduced me to them and still the overall most coherent and best flowing album; their best by far!

This album has their all-time classics, Living on a Prayer, Wanted Dead or Alive, You Give Love a Bad Name!

This is the first Bon Jovi almb I listened to front to finish, and is by far the best album I have heard by any band ever.

A little bit too negative, but not bad. I mean, half these songs are pretty cheery, as far as tone goes. There might be some bitter irony in the fact that a song called "Diamond Ring" is on the same album as a song that deems rings pointless with the line, "His ring is on your finger, but my heart is in your hand!" but the rest of the songs- even not so cheery ones- aren't bad. They're all pretty good, if you can ignore that irony.

For the past twenty-plus years, I thought I was one of very few who regarded this as Bon Jovi's best work. This album always meant a lot to me on a personal level. I decided to research and learn what others think about this album and it's nice to see so many others feel the same. On just about any ranking, this comes out on top. I only wish Bon Jovi continued making music like this.

Not only a mature sound, it is a brilliant one that showcases the full talent of the band both lyrically and musically - they four of them are on their top; these days, hey god, damned, something to believe in and something for the pain are gems; jon's voice won't be this good after this ever again.

This has the most powerful ballads and lovely sounds to it, my favourites are This ain't a love song and These days. This was also the album where the band looked so flamin' hot! Richie really played those solos well, and Jon sang his heart out - everything a good album needs. So yeah, These days - #1.

Honestly, even the hits are hard to find on the radio. Although I wouldn't say all the songs from New Jersey are great, but the vast majority are. (Ride Cowboy Ride is done before you even realize it started and Love for Sale is a little corny, but not bad.)

This is Bon Jovi's best album, The whole album is great. The start of the album is great too, Lay Your Hands on Me is a hell of a way to start off an album, then followed by Bad Medicine. I'll Be there For You is a great rock ballad also, probably one of the best ever written!

I guess this is Bon Jovi's 80s best album of all. Slippery is great but some songs never made it so far as the hole New Jersey album.
every song show us that BJ isn't just Livin' On a Prayer, Wanted and Bad Name.
This album has the most songs played until nowaday's setlists

If you look at statistics, Keep The Faith and New Jersey are the best albums, since they both had six hits. If you look it like that, things play out like
1. New Jersey and Keep The Faith
2. These Days
3. Crush and Slippery When Wet
4. Bounce and Have A Nice Day
5. Bon Jovi, 7800 Fahrenheit, Blaze Of Glory, Lost Highway and the Circle
6. 100,000,000 Bon Jovi Fans Can't Be Wrong (Come on. 60 songs and there's ONE hit? )
7. This House Is Not For Sale (don't know about burning bridges and what about now)
8. Destination Anywhere (NO hits? )
And that's how I'd rate all their studio albums. (Everything else is #9)

Best BJ album ever. Great fresh hard rock songs like I Believe, Keep the Faith, I'll sleep when I'm dead... Beautiful ballads like In these arms, I want you and Bed of roses. With Fear and If I was your mother there are some heavier songs maybe one of there heaviest songs. Every song is great and goes into your ear. This is the typical Bon Jovi optimism.

Almost all their albums are great but this one is my favourite. There are killing ballads like In These Arms and Bed Of Roses which has also a spanish version. Also there are songs like I'll Sleep When I'm Dead and If I Was Your Mother with great solos by Richie. Songs like I Believe and Keep The Faith help you to go on in this world and encourage you. But to me the best song in this album and the best Bon Jovi song ever is DRY COUNTY WHICH COMBINES ALL THESE THINGS!

I can't believe this is only 4th. Keep the faith and Dry county are probably the best Bon Jovi songs, but maybe they're not as mainstream and don't appeal to larger audience.

As great as Slippery When Wet and New Jersey are, these songs are pretty good, too. I mean...She Don't Know Me and Love Lies kind of stick out, but they're not bad, for ballads.

Of all the Bon Jovi albums I tend to like this one the best even though it never sold as well or had as many hits as SSW or NJ. I like the rawness and brashness of it before they made it big and were all glam. Not as polished as their later albums but still a great album in its own right. One of the better rock releases of 1984.

Burning for love... For ever

Though I prefer Slippery When Wet, New Jersey and Bon Jovi over this one, I'm giving it a vote because it deserves to be in top 6. It has some amazing songs, one of which almost made me cry (being Only Lonely). Other ones include In And Out of Love, Tokyo Road, The Hardest Part is the Night and Silent Night.

Features two absolute great ones! In And Out Of Love is an earth-shattering track and a bit of an underrated one, Tokyo Road has a really catchy beat!

Glam metal is something simple. Party Alcohol and girls... This is the best photograph of that era.

It's ironic that Jon disavowed this album. His fans seem to love it.

7 Have A Nice Day

It's a hard choice, but I vote this. But why is Crossroad on the list? It's a compilation album, of course it has the best songs. They have other good albums, These days has the best lyrics, New Jersey is almost as good as HAND, and Bounce has great songs, but this is the best.

For me, the Bon Jovi's work took the top here... This album sounds like a hard rock. It still was Bon Jovi att all. After it, nothing more...

One of the best albums with songs like "I Am" "Novocaine" "who says you can't go home" and "have a nice day". Best album of all time.

Their last great album, Crush is a fun record made with a back-to basics approach reminiscent of their 80s stuff. Also a great portrait of what the band is about: anthemic and epic rockers (It's my life, just Older, next 100 years), powerful ballads (Thank you for loving, mystery train) and pure pop (captain crash, say it itsnt so). A must-have!

Crush is record which is between 21st century and 80s and it has new touch of bon jovi's new era it has fab tracks like it's my life their trademark song then love ballad like thank you for loving me that's why it must be in topp 5 at least... )

This is not only my favourite Bon Jovi album, but one of my favourite albums of all time too! Considering pretty much every album they release is at least 8/10 there are a lot to choose from as "the best". It's always a sign of a great album when the singles are all top-quality, but you find even better songs on the album - "You Had Me from Hello", "Right Side of Wrong", "Undivided", "Hook Me Up" and "Bounce" are all incredible. The remaining songs aren't exactly bad either, and I'm certain others would find their favourite Bon Jovi song hidden amongst the track listing on this bad boy.

Everyday this album is Misunderstood. This album and the likes of Slippery When Wet are Undivided. This album went The Distance. Bounce this album up to the top 5, because Bon Jovi is always there to Hook Me Up. Bon Jovi, your fans, are All About Lovin' You.

I'm a little Bias but it was the first album I ever had and the Bounce tour was my first ever concert, maybe not his greatest but there are some such as "Joey" and "The Distance" definitely worth another listen.

The Contenders
11 This House Is Not For Sale

Official New Greatest hit album it.
Very too much Best and good and awesome and nice album it.
Voting for it...

Really new so ill be the first to say this album is great.

Best and good album it...

This record is awesome. I've heard all the bon jovi records (I have all of them), this one may not have the big long guitar solos but it has the most meaningful lyrics. I love every song on this record and I deeply enjoy playing the entire album on guitar.

Beautiful songs, ballad or heavy, from beginning to end.

Even though it's a JON Bon Jovi album, Janie, Don't Take Your Love To Town... Queen Of New Orleans... Ugly... Destination Anywhere... Naked... and... August 7, 4:15, rock. That is 6 songs off of a 12 song album that rocks. This means that this album should be higher, 50% of this rocks. I mean the other songs are bad, but this is up there for one of my favorite albums of all time... and I didn't know it even existed till I bought it about 4 months ago.

Honestly, this album deserves more attention. Yes, it's a solo album, but it has some pretty awesome songs. The only ones that are kind of cringey are Naked and Ugly (which isn't that bad, but is a little corny.) The outtakes are pretty cool, too.

Highly under rated album. Good to have a bit of a different vibe once in a while. Honestly think this album brings out Jon's true identity, something he has always wanted to express.

Lost Highway is a great album, and the title track has to be the best song. Such a good rhythm!

By far the most creative album made by bon jovi. All songs are brillant. Not a mile the best, but certainly the best

My favorite album since Slippery When Wet. I love Lost Highway

Basically the Japanese greatest hits album. Not bad. I like the album that comes with it- Tokyo Road live- which is why I like Richie Sambora's song "Father Time"

Let's just say there's a reason it's my profile pic.

Have to say it's the best simply for Blaze of Glory, a really good song to listen/jog/work out/play to, the opening, wavering guitar chords and the chorus make it an unforgettable classic!

Most Songs are pretty good.

Just the best. Definitely the most underrated BJ album there is. All of them are good, has some great ones like Pictures of You and That's What the Water made me, but without a doubt the creme de la creme's of the album are I'm With You (The entire chorus is epic) and Because We Can (Hitting straight into the song with the amazing chorus")

This album is the only Bon Jovi album I'd get because it has all of their major hits including four new songs which are all brilliant. Also misses some hits such as never say goodbye,dry county but don't let that put you of. This is a 10/10

I'm kind of surprised this wasn't on the list yet.