Such a strong message comes through in all of the songs on this album. There are so many underrated songs, so much power, so many raw emotions... This is Breaking Benjamin at their best.

Beautiful lyrics. I love how there is power and meaning to every song. Breaking Benjamin definitely delivers with a variety of different songs that should appeal to everyone!

The best album ever! 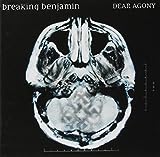 As much as I believe that Phobia is a 10/10 album, Dear Agony is still better... - unknown-soldier

This album cannot be matched...

All the songs are so powerful... I challenge someone to listen to the entire album and not be able to connect with at least one song.

I listened to the entire album, and connected to all of the songs lol - unknown-soldier

3 We Are Not Alone 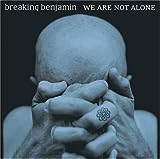 This album got the band to where they are today, as one of alt. Metal/hard rock's most popular artists. 'So Cold' set the modern rock/metal radio template for a hit song, 'Sooner or Later' cemented their place as a dominant rock act, and 'Rain', the 2005 single and album version, showed their ability to slow down and sing a beautiful, calming song. The 2005 single version (also released on some copies of "Phobia", another great album by the band, and as a hidden track on the re-release of "We Are Not Alone" when it was certified platinum by the RIAA) also shows how experienced Ben is in the vocals department. Let's not forget the powerful, harsh, and masterful drumming of Jeremy Hummel, crushing and melodic playing of guitarist Aaron Fink, and the outstanding, driving force of bass player Mark Klepaski. This album, after going Platinum, quickly caught the attention of their record label 'Hollywood', thus giving them more attention, and earning them the status that got "Phobia" and ...more

While some of the other albums may have certain songs that really stand out and are extremely powerful, this album is captivating from start to finish. It opens with "So Cold" which sets the bar pretty high, and then it never drops. Not many albums can say they are great from start to finish, this one does and does it beautifully. I would have to say as far as albums, this is my absolute favorite. I have SONGS on the other albums that I love more than any of the ones on We Are Not Alone, but this album is the most balanced and over all enjoyable. To me THIS IS Braking Benjamin at their best! If some one had never listened to them before this is where I would tell them to start!

The most creative album from the band. Most of their material became a little formulaic over the next two (soon to be three albums) which are great don't get me wrong, but lack that uniqueness that We Are Not Alone offered us and resonates with us to today.

Been a Breaking Benjamin fan since Saturate. I believe this album really brought Breaking Benjamin back to their roots of what made them so great with We Are Not Alone and the previous mentioned album. Glad the restructure of the band didn't ruin any of this.

Just heard it. SO. DAMN. GOOD. Actually quite a heavy album, I thought it was going to be lighter. Awesome harmonies on these songs. Even some nice guitar solos, this albums been a huge suprise. Screams actually play a huge part in these songs, wasn't expecting that. Just Amazing, simply amazing. Their best album yet, to say the least.

I love it. All songs are well chosen, it suits perfectly the idea I made about them. That's pretty cool to hear and you can listen all the album almost without seeing the transition between songs.

First half of this album is phenomenal. Probably one of my top 5 albums at the moment.

When judging an album, I say, which album has the MOST songs that I enjoy. Not necessarily my favorite song by the band. IN this case it is both! Every song is a gem on this album. Every song has five stars for me! - jMag220

Definitely underrated. This is my favorite album. Water, skin, wish I may, and sugarcoat are the best!

Easily better than Phobia and any of the rest, definitely their best album and I can't believe it isn't rated higher.

SO underrated. Listen to Skin, Home, Medicate, Polyamorous etc. These are some of Breaking Benjamin's best songs!

This is what we get when every album in a discography is spot on master class. I guarantee you if this album was released by someone else rather than Breaking Benjamin, it would be among the top 3. - unknown-soldier

The only BB albums better than Ember are Dear Agony and Phobia... This is yet another memorable album by BB, and its heavy. Thank you BB

What an amazing, breath-taking record. Absolutely stunning. I was expecting a good album from this legendary band, but I wasn't expecting to be blown away or mesmerized by it. Breaking Benjamin did just that with Ember, proving they still have a lot of quality to show! - UltimateHybridX

This is one of their best greatest hits album! All of the rarities and hits!

Best Breaking Benjamin and Bullet for My Valentine Albums

Album Reviews # 2: We Are Not Alone By Breaking BenjaminPony