The Top Ten
1 Dusk & Her Embrace 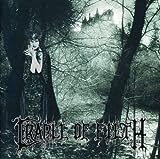 My introduction to Cradle was this album back in 1997. 19 years later it's still my favorite. The melodic guitar lines against the heavy music made it beautiful. The lyrics are great and the Nick on drums is like thunder. Cradle at it's finest

Coming from a fan of Slayer, I find their first album disturbing, but this album especially the title track is enjoyable while being as manic and exciting as hell, (no pun intended).

A gothic romance introduced me to CoF, fittingly it's on my favorite album by them.

2 Cruelty and the Beast

I love the Dusk and Cruelty albums, but this one feels more involved and engrossing.

3 Hammer of the Witches

I'm not a big CoF fan, but this is actually a great album. Dusk and Her Embrace is also great, but this is their crowning achievement in my opinion.

Best Album. Blackest Magick in Practise is an epic masterpiece of work!

What the hell is this masterpiece doing below darkly darker, nyimphetmine and Godspeed, the three most discraceful albums of C.O.F,

Strong, balanced, beautifully composed songs (Lord Abortion, Tearing the Veil from Grace, Cthulhu Dawn, Her Ghost in the Fog) - Well, undoubtedly one of the best 3 albums of CoF (in my opinion the best one)

5 Principle of Evil Made Flesh

This is my favourite, but it needs to be listened to loud so dani sickest most evil vocals ever and barkers incredible brutality can be fully appreciated. Why did u leave barker 😅?

Hasn't anyone heard this album? It's more involved than any, it's incredible

7 Godspeed On The Devil's Thunder

I love all the albums from this awesome band. 'Godspeed on the Devil's Thunder' is my favorite one. Hits "Honey and Sulphur" and "The Death of Love" but this album has many cool songs that weren't singles

This is the album where you can listen crystal clear the extremely fast blast beats from Nicholas Barker in a very good sound!

Actually a EP and not an album, but it has the epic 'Queen Of Winter, Throned'.

A black metal masterpiece, what the hell is godspeed and nephetmine doing above,

Ultra fast and dark. I always thought Cruelty and the Beast was their best album, but after hearing this...

The Contenders
11 Cryptoriana - the Seductiveness of Decay

In my opinion, their best one

13 From the Cradle to Enslave

The first 2 songs are the best songs Iv ever heard in music in general.

It's a brilliant album bar the techno song.

14 The Manticore and Other Horrors