To date, they have 14 studio releases... Vote for your favorite album by them.
The Top Ten
1 Transylvanian Hunger 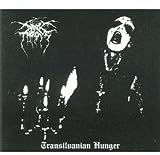 Such a strong bond to black metal! This album defined the music I'll be listening to for the rest of my life! The first black metal album I listened to, and the top of them all!

This is one of those classic Black Metal albums produced in Norway, and only can be compared to Mayhem's Deathcrush, Burzum's Hvis Lyset Tar Oss or Emperor's In Nightside Eclipse!

A true masterpiece of pure Norwegian darkness. This album got me into Black Metal. Aargh!

2 Blaze in the Northern Sky

First ever Darkthrone album I ever heard when I first started getting into Black Metal and still the best of their discography today!

This is my personal favorite. In my opinion in some cases this even outstans Transylvanian Hunger.

Amazing album and I must say better than Transilvanian Hunger.

3 Under a Funeral Moon

Transilvanian Hunger is a very good album but is overrated!
To me among the best are "Under A Funeral Moon", "A Blaze In The Northern Sky", "Panzerfasut", "Total Death", "Plaguewielder", "Circle The Wagons", "The Underground Resistance", "Arctic Thunder" and the last one "Eternal Hails" is excellent!.

This isn't only their best album, but the best Norwegian Black Metal record ever produced.

This one is better than Panzerfaust in my opinion.

Ugly album - a reason why I love this.

FOR THAT REASONS Creative and different from the rest of norwegian typical sound panzer mixes cold atmosferes and fast tremolos with groove and riffing of 80's metal.The variety and infulences make this my favorite from Darkthrone.A Blaze is a great choice too and both are mandatory listens for those who want to know black metal

Creative and different from the rest of norwegian typical sound panzer mixes cold atmosferes and fast tremolos with groove and riffing of 80's metal.The variety and infulences make this my favorite from Darkthrone.A Blaze is a great choice too and both are mandatory listens for those who want to know black metal

This is the reason why Black Metal still in existence.

Panzerfaust is the best Darkthrone album in my humble opinion

This is their only good album. It actually sounds like an album. It has a very straightforward and aggressive death metal sound to it and it actually sounds produced. The rest of their albums sound like underproduced garbage recorded in a sewer tunnel and sent to a record store from there. Transilvanian Hunger? Ha! What a joke. Soulside Journey is a true metal album.

This is the only Darkthrone album I like, because its actually produced.

Underrated album. It's actually better than Under A Funeral Moon.

Underrated album that perfectly blends the necro sounds of the unholy trinity era with the crispness of Soulside. This is a sharp record that is sadly overlooked.

Not their best work best it's very underrated. This deserves to be much higher up in this list then number 10.

I love this album, their best since 'A Blaze in the Northern Sky'.

15 The Cult is Alive

Wouldn't say it's the best, but clearly among the top 5.
Great necro black doom metal sound.