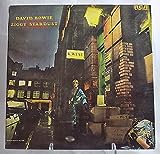 You like David Bowie? His early work was a little too jazzy for my taste, but when Hunky Dory came out in '71, I think he really came into the mainstream, commercially and artistically. The whole album has a clear, crisp sound, and a new sheen of consummate professionalism that really gives the songs a big boost. He's been compared to Freddie Mercury and Alice Cooper, but I think Bowie had a far more flamboyant, androgynous sense of style. In '72, Bowie released this, The Rise And Fall Of Ziggy Stardust And The Spider From Mars, his most critically acclaimed album. I think his undisputed masterpieces are "Suffragette city" and "Starman." The songs are so catchy, most people probably don't listen to the lyrics. But they should, because they're not just about Bowie's alien alter ego, they're also iconic signature tunes in the world of glam rock!

I LOVE Ziggy Stardust! Was in England when it was released & it was instant love when I heard Starman on the radio; have loved Bowie ever since.

Greatest album of all time!

There's a starman waiting in the sky!

The was the album that defied Glam Rock.

Best album of the Berlin era. From great songs such as Sound and Vision (which basically started a new genre of music) to starting making amazing ambient songs, This album overall is spectacular, and perfect. He was starting to recover from his drugs which he nearly died from, he started kicking off again only a year after his previous album. 1977 was a big year for Bowie...

Evocative, groundbreaking and lets face it, influential. Classic album - Bowie at his best!

It may not have any of his greatest songs on it, but as an entire work, it is flawless.

This is the one, the closest he ever got to telling us the truth.

His most happy sounding album, yet one that brings me to tears. Hunky Dory is a double edged sword. Providing the feelings of wonder and adventure (which Bowie had when coming to America) but at the same time, stabbing you through the heart with such an unbearable sadness that it even gives "Blackstar" a run for its money. A truly stellar album, thank you Mr. Bowie.

Like with Ziggy Stardust it doesn't really contain any bad or even indifferent song. Am I right?

And I know most people do not like it due to it's not very analyze-friendly text, but Bewley Brothers is one of my absolute favorite songs in the whole world.

"Ziggy Stardust" is the most overrated album ever. This has far more veriety, quality and entertainment value, and it feels far more like Bowie is singing from his heart. R.I.P

This is considered to be the album where "Bowie starts to become Bowie", definitively discovering his voice and style.

Perfect album while he was on drugs. He created a masterpiece with amazing songs like Station to Station and Golden Years. If he wasn't on drugs it may have been in his top 3 best albums. Perfect. Sad he can't remember making it at all...

A faultless album. Bowie's true masterpiece and one of the greatest albums of all time

6 songs. All of them strong. The titular track is a masterpiece and is followed by a Bowie standard.
His version of Wild is the Wind is defining and Stay is an ubderrated groove. Wow. Just...wow.

Is there a better album opener?

Best David Bowie Album with amazing songs such as Ashes To Ashes, It's No Game and the Title Track. Highly underrated and maybe the best album ever created. Just perfect. Not a single bad track.

Only great songs. Ashes to ashes and Fashion are my favorites, but also love It's no Game 1 and 2, Up the Hill Backwards, Teenage Wildlife and Because You're young.

Love this album. Songs like Scary Monsters (and Super Creeps), Ashes to Ashes, Fashion, It's No Game, Scream Like A Baby, all amazing.

(Apart from kingdom come) There are only amazing tracks on this album.

Perfect final album and very depressing. Very well made and very hard for him to make while he was sick. I cannot listen to the album without Blackstar giving me goosebumps, Lazarus making me hold in a cry, and I Can't Give Everything Away letting it out... And that is why I love it.

Beautiful album that melds rock with jazz rhythms, including dramatic, poetic, Elizabethan-sequel lyrics. This is the album in which David Bowie pushes popsong format well past 2015 and right into the 2020s...

This outta be moved up the #1 spot. Why? because it's not only final album, but it's his #1 album in all of his discography. David, God rest and hope your very proud of yourself!

It might not be his "best" album. But I honestly think it's his magnum opus, his masterpiece. Still can't listen to it without shedding tears.

Why isn't this in the top 10 at least? Honestly though, this album is, in my opinion, the 3rd best he ever did. It ought to be in the top 10 people, let's be real.

Perfect album with great ambient songs and the strong "Heroes".

Brilliant, as Bowie was.

Not just my favourite Bowie album but my favourite album, full stop. Quite simply, stunning! An overlooked, underrated classic, from the wailing guitar opening of Diamond Dogs to the haunting anthem of Sweet Thing to the chilling rant of Big Brother - a timeless, matchless album by a true genius.

This album got a lot of criticism during its release,but I LOVED it because it's overloaded with textures and features Bowie's signature rock tune Rebel Rebel.

Best Bowie album ever! This is much better than Black Star which is very depressing.

A fantastic album. Has some of his best work: Cracked Actor, Drive-In Saturday, Panic In Detroit and Aladdin Sane. Along with Ziggy, I think this is his most well rounded album. An absolute masterpiece.

Not only some iconic songs, but an album the holds together as an album. And the cover art is so iconic it's exactly what anyone thinks of when you say his name.

Everything perfect and on the edge of sanity on this album... And the jazzy piano by the great Mike Garson... He came back for the outstanding "Outside" = second best Bowie.

Come on! This album's cover is the most iconic picture of bowie ever!

Ahhh... Back when pop music was good. This should be an example of what to do in pop. Amazing tracks such as Modern Love and Let's Dance, which was a great album to be his most successful, not to mention I grew up with it.

I like this album because it show how much David Bowie changed styles thru the years and was awesome.

The Contenders
11 The Man Who Sold the World

Didn't like it much at first, thought it is inferior to "ziggy" and "aladdin", but then it grew on me more than any other Bowie album.

I love this album. It should be at least in the top 10. It's number 1 for me. The best songs are The Width Of A Circle, All The Madmen, And Black Country Rock

bruh- 13th? 13TH? Even behind the garbage that is Let's Dance? What is wrong with you people. This is a top 5 Bowie album at LEAST. It's filled with so much groove, and it's very consistent as well.

Rock/soul at its best. David Bowie in rare form. This album is a true heavyweight amongst the all of the low card fighters. There is no other imagination that can carry through your meaningless existence but David Bowie.

Why so low? The title track is one of his best songs.

Contains three of his best S Oddity, Memory of A.. and Cygnet Committee

I agree about 3 songs.

Great album to end the Berlin Trilogy with. My personal favorite is Look Back In Anger, and Red Money, being the last song on the album, uses the same baseline on the first work on the Berlin trilogy, Sister Midnight.

Massively Underrated Album, with an amazing storyline and some really good music along with it. I really like the tracks "Outside", Hearts Filthy Lesson, and Hallo Spaceboy. Perfect album. This was when he really picked up steam from really disappointing albums for a decade.

Great, bizarre experimentation. Not the most accessible, but something to listen to carefully

This deserves to be a lot higher on the list. It's behind Never Let Me Down ffs

This album is great!

16 Never Let Me Down

How can this be at #16?! It's the album that destroyed Bowie's career.

Great Movie I grew up with, and a pretty good soundtrack to go along.

Best album he made in the 21st Century, even better than a masterpiece like Blackstar. 5:15 and Slip Away are probably his most beautiful tracks and they are definitely the best tracks on the album. I went to the tour and it was great.

Great album with hits such as "Slip Away" and "Slow Burn". Second most underrated album, with Lodger being the first.

Should be much higher than 22 - the most complete album Bowie had made since the 70s and with some great individual tracks ('Slip Away' is a personal favourite).

This is where his older voice really shone through.

Seriously? I thought this one was great

I LOVE this album so much that I listen to it every single day since its release. I am actually obsessed with these songs, every next day I love the songs even more. Each word that comes out of his mouth strikes deep in my heart. With extra combined this album is... I don't know what to say

Far too low, only like Heroes and Blackstar more.

All songs in this album are amazing.

This needs to be way higher up than 18!

Bowie is the best.

25 The Buddha of Suburbia