The Top Ten
1 For Lack of a Better Name 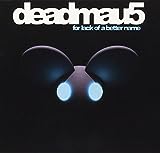 Every song on this whole album is amazing. My personal favorites are FML, Ghosts 'n' Stuff, and Strobe, but like I said before, each and every song on For Lack of a Better Name is awesome, and unbelievably catchy. People, get this to the top!

I feel that this his is most well made album. There's a real flow with it, none of the songs feel out of place and the quality is fantastic.

Comes in a 2nd place after Random Album Title. It has really good songs like Strobe.

This whole album is a journey. Nevertheless, it holds two of the best EDM songs ever made.

While (1<2) almost got my vote, but I decided that Random album title just has a better feel to it. A feel of isolation but in a good way. I find it best to listen to RAT when I feel stressed out or after a long hard day. It just makes me feel isolated from all my troubles. Almost every Deadmau5 album makes me feel good. But this one makes me feel the best. While is much darker but I still like it very much. But overall, RAT is Joel's masterpiece.

Everybody is voting for Lack of a Better Name just because it has Strobe. Strobe is good, I get it but there's better. Such as Alone with you, I Remember, Faxing Berlin, and so much more!

Random Album Title definitely deserves to be above 4x4=12 in my opinion, it's got some of the best music deadmau5 has ever produced. Every song on it was great.

His best album in my opinion, all the songs are good but I would like to have a longer version of Faxing Berlin on the CD release.

At the moment, this is my favorite. His ambient stuff is his best by far. The second disc is a serious grower! It has so many beautiful songs. Some uplifting and happy, some sad and melancholic. Also, so many genres are covered in this album, such as electro house, ambient house, piano music, industrial rock, and whatever the heck Silent Picture's genre is. But yes. Its an incredible piece of music that you should all check out. You have to have the taste for piano music though.

This 25-track masterpiece is definitely my personal favorite. Not only does his "progressive house" tracks sound more interesting than usual, but there's also a lot of interesting I.D.M. tracks on here, and a lot of great piano melodies. It deserves to be on my Nr. 1 spot for sure.

Way better than 4x4=12! Every song from disc 1 is incredible. There is several songs from disc 2 that I couldn't get but 2nd best for me, just below Random Album Title.

Lots of melancholy and sheer melodies. Beautiful album, less repetitive and more progressive than his usual works. My favourite for sure.

There isn't a song on this album that I don't love. This made me start paying attention to deadmau5.

Love this, bought the CD too. Sounds amazing and holds up several years later too. Much love

This one is my favorite. I liked almost every song on it.

Its one of his best. I underestimated it. I thought it would be a really boring album based on the names of the songs. I was wrong. This is like his best album. In my opinion, great comeback after 4x4=12. I know, I just pissed a million people off.

Honestly has some of the best music Joel has ever come out with while he was exploring new sides of his music.

This is some very solid electronic music. This is definitely one of my favorites by him. It showed the world that Deadmau5 was going to be amazing. Unlike Joel's other albums, it feels squishy (if that's the right way to describe it) and has more emotion to it. I love The Oshawa Connection, Waking up From the American Dream, 8bit, and one of my favorite songs from Deadmau5 Edit Your Friends.

While I think its an enjoyable album, it feels unfinished. Joel just kind of through it together and dropped it for money. Even he agrees that it is one of his weaker releases. But there really isn't anything bad about it. But there are way better albums deadmau5 has to offer.

Definitely the best album yet, Imaginary Friends and Cat Thruster are the best songs on there.

Has amazing tracks but as an album has no cohesive theme.