It's just one of those things that everything had to align for this to happen. Perfect!

This is the best Death Metal album and also one of the greatest in Heavy Metal history by far. Amazing songwriting, every song is awesome, the riffs, solos, bass lines, drums and the voice of Chuck are all amazing. Perfect album.

Death Metal aside, this is one of the greatest albums I have ever had the pleasure to hear. - surgeonsanic

This is quite literally one of the greatest albums of all time. - IronSabbathPriest 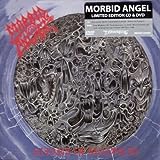 So nasty. Easily the greatest death metal record ever, Not a wasted moment.

Still one of my favorite. Albums of all time

One of the most influential albums of Death Metal genre, this album influenced the Swedish Death Metal scene. - GREYBOYY

This is a really heavy album, but it also displays some artistic merit as well as having some kick-ass tracks.

3 The Sound of Perseverance - Death 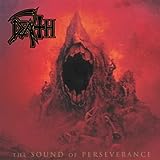 Come on this is better than symbolic we all know that

Deaths best which is a strong statement.

Better than Symbolic for sure, this album is perfection. Ask Rob Halford. - MetalPope

I'm sorry but the only cc albums that I dislike is mostly rape involving it makes me sick. I love this album it kicks ass especially spirit crusher

Come on guys! It is progressive death metal! It may not be the same as the others on this list, but its still very much death metal, just more complex, and the songs are longer. This is by far the best. - slipperyjack30

Not death metal, but great. Albums like Morningrise or Orchid on this list would make some sense. - Black_Abbath

Please do a bit of research before voting as opeth is a Prog. Metal band.

The pinacle of death metal

Best album by death. Just because Scream Bloody Gore spawned the genre doesn't mean it's the greatest album of all time.

Slayer? Black Sabath? They play Thrash Metal & Heavy Metal, who added them in this list?

This is top 3 material. In fact, top 3 should be : Symbolic, Individual Thoughts Patterns and Human.

This album should at least be in the top ten

Slowly We Rot should be top 5, you can't forget the Obituary and this awesome album. - GREYBOYY

One of the most overlooked bands ever

Come on this album spawned the genre, though I do love Death and I personally think they're the best Death Metal band, Scream Bloody Gore did NOT create Death Metal, Seven Churches did, but both are great albums

9 Tomb of the Mutilated - Cannibal Corpse

It was banned in countries. It a was powerful album. Cannibals Corpse is one of the most important death metal band in the history of metal music!

This song is only popular because the first two songs, first two cannibal corpse albums and the bleeding are way better than this

It was so brutal it was banned in Germany.

Should be number one! - Mnsdjjfijf

Honestly, Seven churches might be the first death metal album, but I think this album truly captured the essence of how death metal should be.
Also, each song on the album is good, that's how you rate and album.
My vote: Scream Bloody Gore

Who the hell is choosing these? Heartwork and SotS are melodeath, Slayer is thrash and Black Sabbath is nowhere near death metal.

Symbolic, Human, Blackwater Park and The Sound Of Perseverance are Technical Death Metal, this list includes the subgenres of Death metal too, if you want only Death Metal albums, take a look at "Pure Death Metal Albums" list in this site. - GREYBOYY

That album is the pioneer of death metal. After that album Leprosy is also the trade mark of Schuldiner's masterpiece.

If you're new to metal and you think that the guitar riffs in this album remind you of Arch Enemy, it's because this was the album that Michael Amott's signature guitar style that he carried over into Arch Enemy originated from.

This is also the first "melodic death metal" album ever, a game changing album. Which is probably why many people cite Heartwork as Carcass' magnum opus. It's also the band's most commercially successful.

An awesome album and one of the most influential ones, Carcass defined Melodic Death Metal with this. - GREYBOYY

One of the best.

12 Annihilation of the Wicked - Nile

Recently fell in love with Nile. In their darkened shrines my favorite though. Goes surely to top 10 death metal albums ever.

Probably the beefiest master out there without question. - AdamDestructorJr.

This album is one of the best. It definitely deserves a higher placement on this list.

Best Death Metal album ever! Listen to Leprosy, Pull The Plug, Born Dead and Forgotten Past and then you'll know why this should be on number 1

I have this album on vinyl and when I have parties it's all slayer and leprosy on the turn table. This album and the bleeding and anything by napalm death should be on the list or way higher. And also at the gates

The best, and I think Tmob o f the Mutilated from Cannibal Corpse should be second!

This is the best Death Metal album ever made!

Man, I love Black Sabbath and Slayer, but they aren't Death Metal. Also, The Bleeding is the best Death Metal album, in my opinion. - Magnani

15 None So Vile - Cryptopsy

If you ask the question "what does it feel like to have your ears torn off in under 30 seconds? "
The answer: listen to None so vile
seriously, this album absolutely mutilates you under a second. The first song is one of the heaviest on the album!

BEST ALBUM EVER... BY DEATH

17 Cause of Death - Obituary

Yet to listen to a better death metal record than this. That cover art has kept me frozen and intrigued for years.The eyes ov the devil is savouring your mental suffering. - Black_Abbath

One of the best death metal albums of all time!
This should be in the top ten.

Should be higher this is the definition of DEATH METAL.

I wonder what an atheist would say the unquestionable presence is. Funny combo.

I feel the jazz in my pants.

I dig this a tad more than Severed Survival, but I voted for the latter initially due to it's wide-reaching influence. - Black_Abbath

Come on this beats everything by Cannibal Corpse and at least half of Death’s discography, and it should beat at least some of Carcass and Obituary’s stuff

Earth-shatteringly heavy! Seriously this album can cause earthquakes when blasted at Max volume from a large stereo system!

Crimson is an album that contains a single 40 minute song that combines progressive rock with death metal. Picture King Crimson, but heavier and darker. This song is long, but never feels that way. It's constantly evolving and tells a wonderful tale to boot. Belongs in the top 10 death metal albums and songs.

Is this even Melodeath? I mean, it's modern Soilwork. - AdamDestructorJr.

Extremely underrated! One of my all time favourites.

Everyone always overlooks this album, sure it isn't quite what Death are known for but it's nonetheless very heavy but thoughtful and the artwork is maybe my favourite of all time

Death metal doesn't get more bizarre and twisted than this. - Caleb9000

Its death metal mixed with jazz

31 The Erosion of Sanity - Gorguts

Wow how is this not in the top ten

What is this doing at the bottom of the list!?

Difficult to choose one. This album is great. - Black_Abbath

Influential to all Death/Doom bands. - GREYBOYY

34 Eaten Back to Life - Cannibal Corpse

This album blows my mind whenever I hear it! SKULL FULL OF MAGGOTS!

Truly amazing album. Do have to comment that it is *not* grindcore like the person below me said. Deathgrind/Brutal/Tech Death with melody and BM traits added- so definitely not mainly grind, let alone enough to consider it just "grindcore"

Great album but it s grindcore... anyway if you want to give a larger view u can consider it grind death so death - Deako

36 Once Upon the Cross - Deicide

Slayer is not death metal! @! They are thrash, Deicide's first 3 albums kick so much ass!

love it and happy to see this in the top 5

This should be 2nd because heartwork is melodeath and slayer is thrash metal.

Death is the umbrella genre and melodic death falls within it. this album kicks ass, great addition to the list. - unknown-soldier

This should be number 1. Songs like Follow the reaper, every time I die, kissing the shadows, mask of sanity and many more... You just can't stop listening to the music created by Children Of Bodom...

This is more power metal than death metal just saying.

39 Storm of the Light's Bane - Dissection

As soon as the title track starts, you know you're about to get completely pummelled by riff after riff, and impeccable songwriting... Possibly the best British death metal album of all time, next to Carcass' Necroticism m/

The Reign in blood of Death metal albums! Relentless, and remorseless, a juggernaut of a record!

Amazing album, well suited production, some of the best riffs, the way the band builds up the songs and add complex structure is amazing, looking forward to their next album they put out.

The only cannibal corpse album I love. EP was good too but that's it when it comes to CC in my opinion

Insane old school death metal albums - some of the most memorable riffs in the genre.

Necroticism would be on my top ten. - CosmicSea

49 Deathcult for Eternity - The Chasm

50 From Mars to Sirius - Gojira

Not sure how this album is 57th. This album ranks in my top five albums of all time, not just metal albums by the way. endlessly catchy and spine snapping riffs permeate this entire record, as well as brilliant vocal performances and amazing drum work. Ocean Planet is one of the most heart wrenching and inspiring songs I’ve ever heard in my entire life.

This isn't Death metal... It's groove.. And the lyrics of Gojira would more suggest that it's life metal! But it's still a brilliant album and one of the best metal albums of the 2000's in my opinion! M/