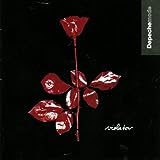 Okay, let's start quoting: This is my best Depeche Mode album I like all the songs, my best is Policy Of Truth:

Classic Album from the Mode their best followed by:
2) Songs of Faith and Devotion
3) Black Celebration
4) Some Great Reward
5) Music For The Masses
hope Spirit is another classic album I have mixed emotion regarding last 3 albums, Delta machine and Sounds of the universe well produced but songs mostly aren't as memorable. Playing The Angel had excellent 4 singles but 3 or 4 average songs made it bit flawed Exciter is under-rated and actually a very good album it's a different more subtle Mode Bring on the Spirit..

Violater came along at a time when I started to appreciate their music brilliant album halo is my favourite on the album thou like all the songs on it.

The greatest album ever recorded, a must for every record collection...

2 Music for the Masses

Great stuff even today. Classics like Never let me down again, Behind the wheel and Strange love make this album for those times a monument. So many bands tried to copy those masterpieces.

Really underrated album in my opinion better than violator.
Best single Behind the Wheel.

3 Songs of Faith and Devotion

Each note and each word of this album talks about passion, love and the pain within...

I really like this DM era but, don't think this is one is more relevant than Black Celebration.

Apogee of their career. Last album with genius Alan Wilder.

The first DM album I listened to. In 1987 (I was 11 then) I borrowed a vinyl from my friend and it is still very special to me. But my favorite song is Never Let Me Down.

Depeche Mode is my favorite band, and this albm sounds great!
1. Playing The Angel
2. Songs Of Faith And Devotion
3. Violator
4. Exiter
5. Ultra
6. Music For The Masses
7. Black Celebration
8. People Are People
9. Sounds Of The Universe
10. Some Great Reward

Great tracks... Great album.. Great sound... Underrated a bit... The best sounding album since S.O.F.A.D... Give a try to this one... The more you hear it, the more you discover... It is a interesting trip in DM journey... And in my humble opinion -one of the best Dm albums...

Mostly underrated. By far the best post-millenium album; glad not to see it at the bottom tough, shouldn't be over ULTRA.

I believe that there are better songs at other albums, like Never Let me Down Again, I feel U, Shake and Disease... But loking the entire album, this has no breaks

Two absolute killers in Stories of old and Blasphemous rumours. A few other good songs, People are people, somebody are overrated sad to say...

Why is this so low? I feel that an album with such classics as Blasphemous Rumors, Something to Do, Somebody, People are People, etc. needs more love!

My favourite songs: People are people, Lie to me, Stories of old, Blasphemous rumours

ULTRA This cd has a dynamic "bad" sound... I only have this cd and the "singles" cd's... Thinking of picking up a few more. years ago I had maybe 10 of their cassettes but no more. I'm looking for a good newer cd... Here what they sound like now.

An incredible album. Very odd they don't perform such songs as Freestate and Insight at all

A couple positions ahead would be fair.

Top to bottom, one of the best albums ever. I'm shocked to see that it's ranked so low on so many charts. I find Violator (most peoples fave album) to be quite lackluster compared to this collection of hits. told you so, the landscape is changing, love in itself, more than a party, everything counts, shame

Under Exciter... come on! At least this was quite innovative, though not popular.

A new 2013 album from depeche mode, tracklist: heaven, welcome to my world, that's all mine etc.

Delta machine plate cover is nicely contains pretty nature picture, that could be good for the band in the future, to bring in their album cover designs

Great album. They not getting older

Really underrated album. Leave in silence, my secret garden, the sun and the rainfall and See you are all amazing tracks. Voting this mostly cause it's far too low. My favourite is Black Celebration.

I think it's the most underrated album by DM - my favourite tracks: See You, My Secret Garden, Satellite... The cover is beatiful!

The first album from depeche mode, that never will be forgotten, tracklist: just can't get enough, new life, dreaming of me etc.

It's a favourite in Winter time.

"When the body speaks" is so soothing. I love the chorus because all we need is tenderness

"Freelove" is another excellent track.

Well done Martin Gore for having written these.

Disappointed that this album is not rated higher at it is in my top 5 of all times. I wish people would put on a quality earphone, lie down, close your eyes and listen. It is a superb use of instruments and sounds.

14 Sounds Of The Universe

If your in the mood its not so bad if your not in the mood, well what can be said it's just a mood album.

Clearly not great but... worse than Exciter and Delta Machine... really?

Picked me up when I was low. Now my favorite DM album except jezebel I love every track