Vote for your favourite or what you think is FOB's best album. 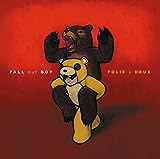 Its honestly so sad that this album was received so poorly, despite being one of the best albums I've ever heard in terms of individual song quality. You've got fantastically catchy tracks like "The (Shipped) Good Standard," "27," and "I Don't Care." You've got "What a Catch, Donnie," the best "best friends" song of the decade, featuring cameos from the biggest names in the pop-punk genre and even music itself. You've got high-flying tunes like "(Coffee's For Closers)" and "Disloyal Order of Water Buffalos." You've got the sinister beast "West Coast Smoker" to close out the album. And how could I forget "20 Dollar Nosebleed," which featured vocals from the one and only Brendon Boyd Urie, a legend in his own right. You don't get better than Folie. You just don't.

I'm a recent fan of fall out boy-and I was shocked to find out this album was rejected by many fans, simply because it's very different from anything else they've done:some of their best and wittiest songs are on here-I don't care, cofees for closers, what a catch donnie-so it's very sad to see Patrick in interviews say he doesn't think fondly of this record anymore-as he poured a lot of his musical creativity into it:( hopefully it will be one of those records that becomes more and more appreciated with age

This is the best fall out boy album. I don't understand why it's so hated by a lot of people. It has catchy songs, my favorites being I don't care, disloyal order of water buffalo, and she's my winona. I also like Watch a catch, Donnie and headfirst slide. The best of course 20 dollar nosebleed. With a very close second being I don't care. It's a great album. I wish more people had liked it. I mean it is 10x better than Save Rock and Roll. It's creative and I've never really heard anything like it. That's why I love it. It's original and creative. FOLIE A DEUX.

The songs, especially the non-singles, on this album demonstrate a kind of maturity that I don't really see on other Fall Out Boy Albums. Folie marks a transition point where the band could musically and lyrically develop to a point to release a great album, but released it before what seemed to be the acquiescence to record company demands to sell more music with a very overproduced "Save Rock and Roll"...

From Under the Cork Tree

This is a legendary Fall Out Boy CD! The musical style and Patrick Stump's vocals are awesome and amazing! The same can be said to Fall Out Boy's other releases, especially "Take This to Your Grave" and "Infinity on High". "From Under the Cork Tree" happens to be their best selling one too, it got the band recognized in the mainstream.

The album spawned 3 singles, of which 2 ("Sugar, We're Going Down" and "Dance, Dance") were monster hits on the charts (#8 and #9 respectively in the US Billboard Hot 100 chart, which is even more massive because rock songs aren't as popular) and radio. Given that, all the songs on the record (besides "Our Lawyer Made Us Change The Name Of This Song So We Wouldn't Get Sued", that song doesn't cut it for me) are worthy singles, and all should get massive radio play; much underrated. "Of All The Gin Joints In All The World", "Nobody Puts Baby In The Corner", "7 ...more

Okay, so I read (not entirely sure if it's true) that Pete titled this album after an excerpt from one of his favorite children's books. Now to me this album has always carried the same beautiful nostalgia as a children's book because I have grown up listening to this album, which also happens to be about growing up, and I have gradually understood the songs more and more as I've experienced things in life and this album just has so many brilliant lyrics, unheard musical virtuosity, and outright honesty that I think in a way it's almost the "Pet Sounds" of a new generation. Wonderful record, I could listen to it over and over every day and never get tired or bored of it!

Best album by far... Don't listen to the review below it "our lawyer made us change the name of this song so we wouldn't get sued" is one of the best :) you can listen to it all the way through. So few albums are really like that where every single song is truly at least good.

Nobody Puts Baby In The Corner, Of All The Gin Joint In The World, Our Lawyer Made Us Change The Name Of This Song So We Wouldn't Get Sued etc are some of the overlooked gems in this astonishing album!

Patrick stumps vocals and pete wentz' lyrics are at their best and wittiest here-+ the songs are super catchy and fun! Especially this ain't a scene

Best album. It takes the sound from "From Under the Cork Tree" and polishes it into a much cleaner, but still Fall Out Boy sound.

"Golden" and "This Ain't a Scene, it's an Arm's Race" are two of the best songs ever. It has this amazing way of including the "From Under the Cork Tree" sound, and adding the sound of "Folie A Deux" to make a beautiful, polished sound. Patrick KILLS the vocals. When I first heard "Golden," I got chills because it is so amazing. No doubt, the best Fall Out Boy album EVER!

Save Rock and Roll

I have recently gotten into Fall Out Boy, and got this album as my first introduction to their music. And it has become my favorite album in my entire library. Incredible songs.

It is just an amazing album. The first song 'The Phoenix' Is one of the best songs ever and don't get me started on 'Where Did The Party Go' and 'Death Valley', And how could I forget 'Just One Yesterday'! What an amazing album!

Death Valley! Just One Yesterday! Where Did The Party Go! All these amazing songs... just because it's not FOB's old style (which I equally like) doesn't mean it deserves this much hate!

This is by far my favourite fall out boy album! I love all the songs on the album and I could listen to it all the time and never get sick of it!

Take This to Your Grave

Sometimes the first is the best, and I think that applies to take this to your grave. I like fall out boy's new stuff but I think the older stuff has a great vibe to it. Songs like grand theft autumn, tell that mick..., saturday and the patron saint... Make this album what it is today.

BEST ALBUM!
HOMESICK AT SPACE CAMP
PROS AND CONS...
WHERE IS YOUR BOY
SENDING POSTCARDS!
CALM BEFORE TH STORM
PATRON SAINTS...
Oh honestly I could simply write all the songs on the album because they're all so great

This album is so underrated... I mean, opinions are opinions, and it may not be their #1, but it is definitely one of my favorites, because this album has NO TRACK that is skippable. I mean, every album has that one song, but no, this album doesn't. You just gotta listen through every single song.

CALM BEFORE THE STORM! WHERE IS YOUR BOY?! MANY MORE! THIS IS THEIR BEST ALBUM!

Alright, let's make something clear: this was NOT a bad album. However, the reason why it's not my favourite is because it doesn't sound like Fall Out Boy. Joe is practically nonexistent (most songs drown him out with electro and sampled music), Andy's drumming could have been done electronically (they didn't give him a chance to be as creative as he was on their previous albums), and Pete wrote lyrics with Patrick Stump (that's nothing new, though). Patrick's singing style definitely changed post-hiatus, which I have mixed feelings about. Plus: you can actually understand 90% of the words he sings. Minus: His older singing voice was charming. I miss it.

This isn't my favorite album, but I don't know why so many people say that this has rubbish lyrics, like have you even heard "The Kids Aren't Alright" and "Jet Pack Blues"? The lyrics are so poetic and beautiful and for some reason no one else sees that. The music isn't bad at all.

Okay while I do like the old stuff better, this album wasn't so bad. I actually liked most of these songs, like Centuries and Novocaine. It's not a bad album and I wish the hyper-nostalgic pretentious @$$holes who dare to call themselves Fall Out Boy fans would stop hating on it so much.

People have to listen to the album more! I love Forth of July and Kids aren't alright. The songs are worth memorizing

This was the second album I ever got in my lifetime and I loved it. - 0w0uwu

It's not bad! It's simple, short, and sweet. All of it was recorded in a span of 48 hours. Andy's drumming was excellent (especially in Love, Sex, Death), Joe and Pete rocked it on their guitars, and Patrick's singing was amazing (as usual). I love how they went back to their old style. 8/10

Best album yet, listening on repeat

Not even that good

Fall Out Boy's Evening Out with Your Girlfriend

By far their best album.All the songs are amazing except Young and Menace and Sunshine Riptide.The last of the real ones is the best Fall out boy song

Amazing I LOVE IT

The cover of Beat It is better than the original in my opinion! I’m not hating on Mj, I just like the rock version better.

Well obviously it has to be this... I mean it has all the big hits on one CD. Yes, there are some great songs missing but in general this is still the best CD, and the title is excellent.

Nobody ever talks about Yule shout your eye out 😩

My Heart Will Always Be B-Side to My Tongue

Simply Beautiful, I never thought that I would ever say that about an album but this one really surprised me.

This album is amazing! I like the acoustic versions of the songs on here more than the originals.

WHAT? This album is completely beautiful! Should be top 5.

AB/AP was a mediocre album. And these remixes are absolute crap. Way to ruin the good tracks on the original album.

I agree, this album was bad. AB/AP was alright, but the remixes with the rap were just bad. This album didn't need to happen.

It’s only three songs long, but definitely makes my top 3 for Fall Out Boy!

All around solid promotional material leading up to the release of Folie a Deux that was a nice preview for the upcoming records of Fall Out Boy, Panic! at the Disco, The Cab and the various other artists on the album.

Notable hits are: "Catch Me If You Can" and the original recording of "Lake Effect Kid".

I rate this album a solid CLINT SPARKS/10