Best Fighting Games for the Xbox

They may be gritty, cartoonish, realistic, outlandish, 2D or 3D but they all are top notch when you are looking for a nose breaking, fist mashing, muscle rippling good time.
The Top Ten
1 Mortal Kombat: Deadly Alliance 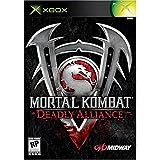 I like it and all, but what about Mortal Kombat: X

By far the best game to have or to own on Xbox.

Probably my Favorite game in the MK Series, I could seriously play this game for hours.

Um, have any of you people on this site even played this game! This game has 56 characters to fight with for Gods sake, half Marvel characters and half Capcom characters. You can customize your party to fight with, customize the stages, and customize how you can fight. This game is the one perfect fighting game; it has all recognizable characters and refined easy to use controls. - masongilbert74

Definitely this one.. I can't believe people actually like Deadly Alliance.. That's the worst fighting game ever. Watch some reviews please.. - NightAntilli

This game is a mix of awesome fighting with foul language I also likes is because it bring hip hop into the game. it has choices of name brand cloths such as Jordan nike ecko and hundrds more I have to give this game a 10/10

This game has boobs!

Hello, this awesome game should be no.1. It was even better than Deadly Alliance. Year, way better. Each fighter had 3 fatalities and own voice. Plus its Konquest Mode was just brilliant - Magnolia

The Contenders
11 Fight Night Round 2

Really? All the way down here..Mann I use to play it and now I still wanna play. - Ishyaword

This may have been big back then, but when you listen to it now, it's just so angsty and dated. This guy is just an overrated Alice Cooper ripoff that I doubt will be remembered for generations to come.

Don't forget about this

16 The King of Fighters Neowave

20 Injustice: Gods Among Us

This game's cool in general, to be honest.

25 The King of Fighters: Maximum Impact