The Top Ten
1 The Legend of Zelda: Oracle of Ages 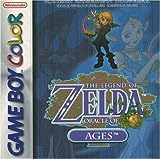 The only thing original about this game is how formulaic it was.

Never enjoyed playing a Pokemon game as much as Gold/silver. Gotta love the bug catching contests

Pokemon Gold is one of the best in the entire Pokemon franchise!

A re-mastering of an already great game

6 The Legend of Zelda: Oracle of Seasons
7 Game & Watch Gallery 3

I loved playing this one in Dream Collection. It's a great game. - Garythesnail

This game is great

Teris is on MULTIPLE top ten video game lists, so it should be at least 3rd.

Pokemon Yellow is amazing! Can you name any other Pokemon game where you can get all three starters?

Its nice to have pikachu around! - RenoK

This needs to be number 1. I really like this game.