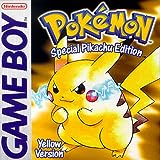 This game is never going to be better than any of the newer installments. Yellow is fun but they just keep adding things to the game that make it better so really the oldest game that can even be considered the best is games from 3rd gen.

Amazingly good game that never gets old and the character in the game is not Ash or Red it is Yellow from the Japanese Manga series. Lool it up.

My vote made this and Golden Sun tied up. Next person to come here vote for pokemon yellow.

The best. You can get all the starters I own with charizard

The most popular game of all time should be #1!

3 The Legend of Zelda: Link's Awakening

Its everything you love from Link to the Past wrapped into GameBoy with a twist of Mario to make it feel fresh.

Its everything you loved from Link to the Past, but on the small screen.

Best adventure on the gameboy

My favorite platform game, once mastered you can complete it in 20 minutes, but it's still fun and full of hidden extras.

It's a fun game that you can play over and over again even though it's short. It appeals to both beginners and experienced players. And it's soundtrack is awesome (even though there would be better music in later games).

Zelda is trash. Almost all of the games are severely overrated.

I love this game! I got through all 8 gyms and I beat the elite four. Then I caught Mewtwo with the master ball! My Pokemon were Blastoise, Charizard, Gengar, Venasuar, Alazazam and Pidgeot!

The game that taught me how to read and what started Pokemon. Still pretty amazing to this day.

My first gameboy game. I still play it. Pokemon never gets old, You can't get bored with it.

The first ever Pokemon game ever is obviously the BEEESSTT

This needs the No. 1 spot. My favorite game of all times.

Best Gameboy game. The ones above don't compare

Generation 2 was defiantly where the series had reached its highpoint. Heck, you could even go to the place red/blue/yellow took place and find new and more exciting things in the world. The gameplay was more fixed and balanced than that of generation 1 and had a variety of ways to care for your Pokémon.

I love how people think Pokemon Yellow was better.

Amazing game, in my opinion better than Red/Blue/Yellow. I prefer this one because I like Lugia.

Lugia is amzing. I LOE HIM SO MUCH. I caught him and went with Bugsy butface and greg heffley on a joureny.

This game s so fun

Just like Pokemon Red The BBEESSTT Pokemon game ever.

How is this game so far down? It not only began the Seiken Densetsu series but also inspired the SaGa (Final Fantasy Legend) games. This game deserves to be in the top ten.