The Top Ten
1 The Jester Race 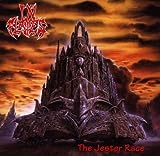 Strongest opening on any album ever, on parr with Megadeth's "Rust In Peace" when it comes to an epic intro. Moonshield is the best song on the album! But December Flower, The Jester Race and Artifacts of the Black Rain are amazing

In Flames' second The Jester Race is the second album by melodic death metal band In Flames. It is the first album to feature Anders Friden as the band's vocalist and Bjorn Gelotte as the drummer.

Highlights: Artifacts of the Black Rain, Moonshield, The Jester Race

The greatest of the band!
Personally one of my favourite Melo Death album, because of the strong opening, the insane riffs and the unforgivable solos.

U have to learn to love this album. It's by far the best album but it's not for new IF fans. Best guitar riffs from in flames, but not the best growl.

Easily should be #1 the first 7 songs of the album ABSOLTE GOLD not a single bad song in those even if Pinball Map may not sound very good.

Number 6? Seriously? Clayman is an unbelievable, classic melodic death metal album! In my opinion it should be number 1, but at the very least it should be in the top three. Great album.

This is there best album sure Jester Race was good but CLAYMAN has ALL good tracks you won't want to skip ANY.
Not just my favourite In Flames album but one of my favourite albums EVER!

10/10
Bullet ride, Only for the weak, Satellites and astronauts, Another day in quicksand are best songs... But all songs are great!

Highly recommended! Contains some of the band's best work. For me Ordinary story, Coerced coexistence, Insprid 2000 and the amazing bonus tracks Clad in Shadows, Man made God are some of my favorite tracks from their entire catalog.

Colony is the fourth album by Swedish melodic death metal band, In Flames.

Greatest solos, and some of the heaviest songs.
My favorites are:Colony, Scorn,coerced coexistence, and insipid 2000. I'm going to listen to them now! Hell yeah

After a few albums of experimenting with a lighter sound, all the while still maintaining their melodic death metal style, In Flames created Come Clarity. This album is lighter, but is still reminiscent of their older, heavier material - however, it also has some of the bands softest moments. It is the beautiful mish-mash of death metal/clean vocals, clean guitars, and a high-quality, top notch production. Vocalist Anders is also at his best here, doing some of his most brutal vocals and some incredible clean vocals. Their isn't anything noticeably wrong with this album, and I think it easily stands as one of, if not their best.

Come Clarity is the eighth studio album by the Swedish melodic death metal band In Flames.

This is the pinnacle of In Flames for me, it doesn't get better than Take This Life, Pacing Death's Trail or Versus Terminus!

Awesome album. I like Come Clarity, Crawl through knives, take this life and Reflect the storm!

This album has everything that the early period of In Flames stands for, awesome riffs, outstanding melody transitions and a very good mixing between growl and clean vocals. Food for the gods is a great example. A fast and genius main riff and both growling and clean vocals. A song with great melodies is Jotun which is also one of the greatest tracks in Whoracle.

My childhood in one album! But I really think its wrong to compare whoracle, colony, the jester race, clayman to each other because there all as good masterpieces sent from higher power or something. jotun, words within the margin, gyroscope are the highlights of this album but all songs are legendary!

I discovered In Flames with Whoracle. For me it's between this and Colony for the top spot. The fact that this is a concept album put it over for me. Although Colony showcases melodic death metal to a slightly higher degree.

This was once the one old In Flames album I didn't care for. Oh, how misguided I was. Maybe because it's a concept album, it brings you all the way through without disrupting the flow - and Jotun, what a song.

Reroute to Remain (Subtitled: Fourteen Songs of Conscious Insanity & on The Reissue: Fourteen Songs of Conscious Madness) is the sixth studio album by the Swedish melodic death metal band In Flames. The album saw a major change in musical style and was In Flames' first considerable step in the direction of mainstream music, and was met with rejection among many of their fanbase.

Id like this album a lot more if the vocal and audio quality was better. It seems like they rushed to put it out on the market. They should have took another year to perfect everything and give songs a more complex breakdown

All songs are really good in this album and there is no negative things to say about it.

In my opinion is this album a masterpiece of awesome music. Their best album.

7 Sounds of a Playground Fading

Why it is on the seventh place?! Powerful, melodic riffs, beautiful vox and heaviness. Whole album is masterpiece. This is my favorite by them

this is by far their best album ever
I don't understand why people like Jester's Race. this has amazing vocals, every album after tried to copy this but couldn't. its clean easy to understand. not a single bad song. if you want to get somebody into In Flames this is the album to share.

my opinion this should easily make number 1, great story to tell, amazing vocals, different kind of vocals throughout the whole album, in my opinion sounds of a playground fading is the best song ever, this is the song that made me enjoy IN FLAMES as a whole.

Perfect combination of their modern alternative sounds with some old-school riffs and lead guitars. Anders is screaming and growling again (title track, A New Dawn, Darker Times, The Puzzle) and the lead melodies from their first albums have returned (title track, Deliver Us, Fear Is The Weakness). Overall their best album with the title track being my personal IF favorite

8 A Sense of Purpose

It baffles me that this isn't considered In Flames' best album. Incredibly strong songwriting from start to finish, a consistent and clear-cut style all the way through, very tight musicianship, and a blend of everything the band do well. I know that people are often attached to bands older work, but for me this is a real high point in their discography.

This album to me is their finest work. Not because it contains more than a few popular songs that seem to be included in the bands "live" setlist, but because I think it's a perfect blend of heaviness and melody, with great guitar riffs, time changes and just a solid album from start to finish.

This album is amazing for all the song but really for Alias, the Chosen Pessimist, Delight and Angers, Sleepless Again and Disconnected. I like Mirror's Truth too, but it's not my favorite.

Are you kidding me? #9? This album deserves to be in top 3! Alias is hands down their best song and The Chosen Pessimist is incredible! Delight and angers is classic death metal!

9 Soundtrack to Your Escape

Highlights: The Quiet Place, My Sweet Shadow, Evil in a Closet, In Search for I, f (r) iend
I hate how everybody says this album is their worst, this album was SO awesome. F (r) iend is one of the most badass songs ever by In Flames, and the quiet place is pretty much their most popular song

Soundtrack to Your Escape is the seventh studio album of Swedish melodic death metal band In Flames.

Highlights: The Quiet Place, My Sweet Shadows, Touch of Red

Pretty hard to say what the best In Flames album is but this one barely nudged out Reroute to Remain and Clayman.

How is this legendary album below 4 terrible albums? Remote to Remain, Sounds of a Playground Fading, A Sense of Purpose, and Soundtrack to Your Escape? Those all suck. Lunar Strain is their best album period. Subterranean is a close second.

The should be up there next to The Jesters Race and Whoracle. Their first four albums (Including Subterranean) are their best in my opinion.

Number 7? PLEASE this album is the best death metal album ever!

Heavily underrated album & possibly their best since the 90s era. It's a different style now, but this album has everything what makes a superb album, especially great choruses.

UNDERRATED! this album was 13 times better than siren charms, it deserves to be number 9 at least.

This is one of the albums I'll listen to all the way through from anybody. even though I skip this is (our) house.

The best they have done since Clayman.

Siren Charms maybe their lightest album yet but lyrically, it contains deep emotion. If you don't mind listening to alternative metal, Siren Charms is one that offers great relaxing with occasional shreds and light screaming and if you listen and pay attention to the lyrics, you can hear deeply entrenched emotion. This is the "Feels" album.

I like it when bands play a diverse range of music and don't pigeon hole themselves in one style. This album is their most mature piece of work and shows growth as musicians. Yeah it's softer than their early stuff, but it still kicks ass.

Highlights: Most of them.

Many people say this is their worst album, but in my opinion it's the album where his voice is performed in the best way of his career.

This is their best release, but I voted for the Jester Race, because this isn't an album, it's an ep. But this is better than The Jester Race.

Biosphere kills! Stand Ablaze and Everdying are also pretty awesome. I wish it wasn't an EP, but a full-length album.

I Just hear this and I have to say is a masterpiece.