The Top Ten
1 Somewhere In Time 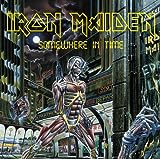 Somewhere In Time is the best.I have also seen the original cover.I noticed many links like:

Ancient Mariner Seafood Restaurant-Rime Of The Ancient Mariner
Aces High Bar-Aces High
The pyramid's picture looks like the album cover of Powerslave.
Phantom Opera House-Phantom Of The Opera
Live After Death-Blade Runner-Live After Death
The clock saying 23:58-2 Minutes To Midnight
My favourite thing in this album is that Iron Maiden added many links.Up the Irons!

The blade runner style is amazing and there are so many references to other Iron Maiden songs and albums in the artwork.

The most perfect album art, in terms of detail, dimensions, and nostalgia references to stuff related to maiden.

Defnitely the best cover and the best album. Eddie the robot rocks beats the mummy by miles.

2 Number of the Beast

The most iconic Iron maiden album covers are from The Number of The Beast, Powerslave, Fear of the Dark, Killers and Piece of Mind.

The best cover for the very best Iron Maiden album. Love it to death!

Wow. This is a great album cover. It is very creative. I like it a lot and it looks great. Why hasn't anyone commented it's so great!

The most remembered Iron Maiden cover of all time..

Is this Eddie female?

The details are very neat and predominant on this album, and there are a few hidden images/references to previous albums. Granted, Somewhere in Time has way more references, but I find that distracting. This cover is clean and classy!

The Egyptian theme makes Maiden's best album also their best album cover. This cover actually made me think of To Tame a Land when I first saw it (you know the whole desert thing)

This is the definitive image of the best Iron Maiden album, this image passes the power of what you're going to listen.

Along with Somewhere In Time, Killers, and the Number of the Beast, it's just as awesome as the music on the album.

Piece of Mind should be much higher. Although it is a very simple cover, it has so many details and I for one love it. UP THE IRONS!

An album cover that one, quite simply, cannot forgot.

6 Fear of the Dark

Imagine you're walking in the forest at midnight. You look up and you see Eddie as a tree monster. That's unsettling.

Great cover, great songs. Overall my favourite album of all time. This cover is actually the backpatch on my battle jacket. m/

Probably, along with Powerslave the most clean and for sure the most surreal of Derek Riggs' work with Maiden
1. Seventh Son
2. Somewhere in Time
3. Live After Death
4. Powerslave

This album cover is so cool.

9 A Matter Of Life And Death

Something about this eddie is so much more disturbing and striking than the rest.

There's a huge painting of this on a wall near where I live.

Why is this one getting overlooked? Because there's no thumbnail and you forgot? My personal favourite.

I'm not sure if people know that this album exist, that maybe why they haven't vote for it.

14 No Prayer for the Dying

15 The Book of Souls

It's simple but I love the presentation of Eddie here.

Most people can't see the awesomeness in this album cover. It's not the best, but not bad either.

17 Stranger In a Strange Land

18 From the Fear to Eternity

How is Dance of Death above this? Come on! The Dance of death album cover is terrible. No Derek Riggs painting should ever fall below that monstrosity!

The cover has many errors but it looks good!