The Top Ten
1 Ashes of the Wake 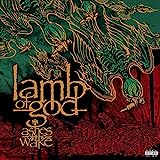 This album is hilariously and unprecedentedly amazing. I have been listening to this album continuously for more than 4 years and it never gets boring. First of all, the production is the best (in my opinion) among the rest of their album; the perfect balance among the guitars, drums, bass and vocal is outstanding--not too noisy or heavy, but clean and powerful. Also, the tones of the guitars and drums are just amazing; they are so lamb-of-god-ish that you can recognize them instantly. Second, the music is just mind-blowing... The guitars and drums. This is the best metal album I have come across (after having listened to thousands of metal albums in 4 years).

The best album lamb of god have done so far, from the kick ass balls-to-the-wall riffs to the awesome production. Easily the best album they've done so much so, that I tattooed the flaming bird off of the album cover to my arm. Laid to rest, now you've got something to die for, the faded line and ashes of the wake will always be seen as the most popular lamb of god songs. The songs in this album feature frequently in all their set lists to this day. enough said

This and Sacrament (and Maybe as the palaces burn) are the Lamb of God albums I can sit down and listen to from start to finish and want to listen to it again and again. What ISN'T good about this album? The song list, the instrumentals, the mixing and mastering, the lyrics. Its easily their best album. (Listen to the end of one gun where Mark and Willie trade off, brilliant.)

Hourglass, The Faded Line. Blood of the Scribe... This album doesn't have a single bad second on it! Resolution comes second then Wrath but this.. This is just something else

It's a technical masterpiece, Sacrament has too many hits, then you can count. The album makes sence, and fits together. Lyrics are gert, drums are great and the guitar is incredible.
This or VII: Sturm Und Drang, I'll be happy with either one of them at number 1.

I listened the 4 first album in this list and Sacrament is my favorite because of the song's variety. I feel than in Ashes of the wake and As the palace burn, the songs are little bit repetitive, so I prefer Sacrament and Sturm und Drang

Walk with me in hell, redneck, blacken the cursed sun, again we rise, beating on death floor... All lamb of god albums are kick ass but this one for me is the best...

3 As the Palaces Burn

Best album with two top 5 songs in 11th Hour and Vigil. Devil is also one of their best songs. No other album has 3 songs that heavy, angry and fast w/ wicked lyrics to boot.

Ok now this list is horrible. As the Palaces burn is hands down their best and Wrath was terrible. So their best album is below their worst album. This list is trash

Raw, angry, the ashy and tightly composed. Everything a metal album should be. Lamb of gods "Justice for all"

Their best album in my opinion, followed by Ashes Of The Wake.

The great thing about Sturm Und Drang is that Lamb of God no longer comes across as a gimmicky metal band. In this album, while technically it is not their strongest, consistently delivers heavy face pounding songs even with some good clean vocals. It's the only lamb of god album that truly feels like a reflection of Randy Blythe as an artist. That being said, SuD has its weak moments, but all is forgivable when head banging 90% of the time. So yeah, Sturm and Drang is a good time indeed. If you are new to Lamb of God, I completely recommend starting here.

I think it is an awesome album and the band is awesome too. I really like them on all their albums but this one is just better to me. Keep the albums coming and stay together, and not break up like other bands.

My favorite album but not the best I must admit, I was very impressed with Randy's vocals on some songs and there are many memorable riffs and solid writting. I was very, very pleased with this album after the little disappointing Resolution was

Footprints, 512, overlord and Still E hoes are just some of the amazing songs on this album. This album kicks ass start to finish. Every song is awesome.

Definitely LOG's best ever. I have no idea why some don't care for it, it's absolutely amazing! No bad songs, killer production, amazing musicianship, and a brutality seen in none of their other albums makes this their ultimate record. Ashes and Sacrament only wish they could live up to Wrath!

I love this album! Contractor is my favourite song on the album, especially the HUGE scream near the end. When someone asked me who Lamb of God were, I played them Grace. They were like this seems nice, and then they heard the guitar slide! They made a new fan!

Very good album. The vocals are incredible, snares are very good. Everything to nothing is hands down the best song on Wrath.

Their heaviest album, plenty of groove, great reply factor, even their "soft song " Grace is heavy and catchy.

This should be No. 2 after Ashes of the Wake, it is so awesome, just listen to songs like Desolation or the blowing away King Me!

Hard for me to chose but I chose this one its personal preference. All there albums are awesome apart from there first 2 to be honest

You know Resolution is good. It just works albeit being easy to overlook.

Desolation and Ghost walking, alone puts Resolution in a top 3.

Best for sure. It is epic and brutal! It is unique. As the palaces burn has the same brutality but is a close 2nd. Only albums I don't care for are "Sturm und Drang" and "Resolution".

I can't believe New American Gospel is at 7th position. It deserves to be at the top. Are you kidding me?
Black Label, Terror and Hubris in the house of Frank Pollard, The Black Dahlia, Pariah, Confessional, O.D.H.G.A.B.F.E. they are easily the best Lamb of God songs ever.

My personal favorite album, love some of the breakdowns and styles they produced. This is when lamb of god was more experimental, "they've been there and done that." Randy bythes aggressive lyrics make this album even more compelling

This is my personal favorite. I just like the drumming and production on it the best. It just is so heavy and meant for head banging with booze. Best tracks are Confessional, Terror and Hubris in the House of Frank Pollard, and Black Label. Go to this for thrash. Go to Ashes of the Wake for bomb ass riffage, and Sacrament for killer production. I like their other albums lots, and probably get more as a guitar player from AOTW, but this is my favorite.

Raw, angry, aggressive. Crunchy guitar riffs superb drumming, great album all together, before they were officially, Lamb of God.