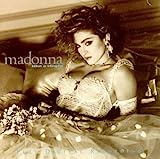 One of the most beautiful album covers from Madonna.. Young Madonna is so beautiful and charming

Very cool and stylish for that time. Madonna was true innovator. I love that short haircut

I didn't like the album so much, but the cover is the best.

Very elegant, the US version had no album name, or logo on the cover, just her, goddess like, subtle shades of blue around her, gorgeous

3 Confessions on a Dance Floor

On this cover Madge is as beautiful as Marilyn Monroe

I prefer the upside down version.

Never heard it laugh out loud

I think this album cover actually has an interesting meaning to it. This album as a whole symbolized breaking something down to the basics and rebuilding it (whether that is a relationship or one's self) = hence the whole idea of DNA. The segments in the album cover I think are meant to symbolize the breaking up of something that seems perfect and rebuilding it piece by piece. Kind of brilliant.

I agree, the MDNA cover art is brilliant! It symbolizes the struggle of rebuilding something from scratch after it is torn apart, just like the journey of the album does.

I love the artistic side of her album covers, but they so rarely have a straight-forward normal shot of just her. This cover I thought captured both the beauty while keeping that artistic side.

This album cover is beautiful

Many people started wearing hats when this album came out

I think this cover is pure art and should've been on higher place.

A bit simple but still great

The deluxe version cover is so awesome!

This album cover is so ugly

23 A League of Their Own