The Top Ten
1 Crack the Skye 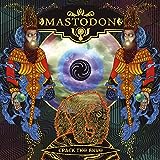 Before this album I feel like mastodon was an amazing METAL band, however once this album dropped it really changed things. They went beyond the genre of metal and made one of the greatest ROCK albums of all time and I think that is saying a lot.

Yeah, this album is a masterpiece. Every single song on this album are amazing. It's their best work, followed by Leviathan. The Czar is my favorite song of Mastodon, and one of the best songs I've ever heard in my life!

All of Mastodon records are brilliant by the way.

The thing is, all of the Mastodon albums are great. Their worst can't be considered any more badly than "pretty good", and their best, this one, is godly.

Absolute barnburner! What an amazing heavy album. I love all of mastodons stuff but this takes the cake for me, it just produced some of my Favorite songs EVER ( blood and thunder, iron tusk)
While still being an amazing concept album.

From beautiful artwork to the brilliantly thought out concept theme, this album is a journey. It's more like reading a collection of short stories about the sea (it's actually somewhat based on Moby Dick).

This may be the most difficult top ten list to rate, but when I was introduced to Mastodon a number of years ago I received a number of albums all at once, and this is the one that hooked me.

1. Leviathan
2. Blood Mountain
3. Crack The Skye
4. The Hunter (most underrated mastodon album)
5. Emperor of Sand
6. Remission
7. Once More round the sun (I never really got into it and the songs are forgettable)

This album has it all... exquisite riffage and a perfect balance of everything you love about "Leviathan" and "Crack the Skye"! Don't let the first track throw you off, it's just an intro into the madness of a man lost mountain climbing.

I just love every song. Not their heaviest, far from the most mainstream, but a diverse tracklist full of well written and amazingly performed songs.

This is probrably the hArdest list to vote on cause they all are great I just love the way this one flows.

After much thought I'd have to say blood mountain is my favourite then crack then lev, hunter then round the sun then call of hex remission and call I have yet to listen to the live album

Honestly, despite being a prog geek, I've never been a massive fan of Mastodon. OMRTS I felt needed more bite and Sultan's Curse didn't do much for me either. But after listening to the whole of this new album today I felt that every track made the album sound especially solid. And I enjoyed listening to it. I'm basing this off one listen though so my opinion may change.

It needed a thousand listens for a full appreciation, but then again it wasn't easy for me to get into any of Mastodon material, now, I must say, I LOVE every damn moment of this masterpiece. For me it holds the top with leviathan and crack the skye, witch are all within my favourite albums of all time. Just be patient with it, let it ease into you and your subconcience, and you will be rewarded

I made the mistake of looking at my recently late father's photo while listening to Animal Kingdoms chorus. Made me teary.

Great stuff in here. Some of it touching and some of it corny. Really easy to like. Interesting album, one of my favourites.

Barn burner from start to finish. Hinds lead guitar elevates the songs to some of the best metal tunes of the past decade. Can't get enough of this album.

5 Once More 'Round the Sun

My second favorite after Crack the Skye! Great mixture of epic/proggy guitar licks, perfectly combined with solid memorable vocal lines, and what makes this thing actually more accessible is the fact that the songs are written in more of a radio-rock formula than Crack The Skye was.

This album is a little different the last 2 mastodon albums feature more of bran dailor on vocals he has a more radio friendly voice different but definitely epic!

Every Mastodon album has its own individual sound, and I personally think the 'Once More 'Round the Sun' sound was an awesome record because of that!

Definitely one of the best of their releases. comes close to crack the skye, but lacks of concept a bit - all the songs have their magic moments. you could say mastodon evolved from a metal band into a rock band into a prog band into a stoner band and now their doing all of that at once, which makes this album just so good.

Really surprised that this is presently the lowest ranked studio album. If you're an old school thrasher or a real metalhead then this and Leviathan will probably be at the top for you. But hey, they're all great albums.

My favourite is actually Leviathan but Remission definitely shouldn't be one of the lowest!

I like this album because it reminds me of when I travel to the Rockies. I always listen to it at least once every time I go there

Crack the Sky is their best but The Hunter needs more recognition. All Mastodon albums are great!

This is their best no doubt about it!

8 Call of the Mastodon

9 Live at the Aragon

Adding it to the list. Some of Mastodon's best material in my opinion - really worth a listening, if you like their proggy side.

The Contenders
11 Live at Brixton