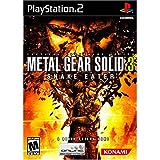 The greatest metal gear game,
The stealth, the story, and the gameplay add up to one of the best ps2 games. not to mention it sets up peace walker, ground zeroes, and phantom pain, all looking amazing

This isn't just the best MGS game ever it's the best video game of all time. Perfect story, characters, bosses and gameplay. There is no fault with this game at all.

The best stealth action games in history! The best Boss fight of MGS franchise. The True about Legendary soldier and the best villain of Metal Gear: Big Boss.

This game is Kojima's masterpiece. It doesn't need other games to help tell its story because it works as a standalone title. The gameplay was challenging while it also helped accommodate the story at times. This game was revolutionary and will always stand as one of the greatest games of all time.

In my own opinion one of the best games ever made! Interesting story, wonderful music, amazing bosses, easy to understanding gameplay. A revolution!

By far the best in the series. Fantastic story, interesting characters, easy to understand gameplay and amazing bosses.

Definitely the best of the series, and I didn't play it until a few years ago. Gameplay and story still hold up

An incredible end to the story of Solid Snake, great graphics, genuinely heartfelt moments and characters, excellent music, a beautiful tone, its all here.

The 2nd newest one and in my opinion the best one. A lot of fun and only on ps3. One of the most popular games on ps3. Really good!

Why is this no 2 this is definitely the best one, using the octocamo is just awesome and the storyline is insane. It concludes solid snakes story in a really great way. definitely deserves number 1.

It's not the story of the game that does it for me. It's the fact that this game is a very post-modern one. Kojima basically predicted the future of technology and the internet.

Intriguing story, Mature themes, Extremely controversial. This hands down is one of my most favourite games from the MGS series

I really love this one

My favourite entry in the series. I didn't even think the story was thin or lackluster, it got so much more atmosphere than the other games (-and boy, did the others have atmosphere! -) that I felt entirely sad, when I hit the end after about 170 hours of sheer fun, entertainment, joy and sadness. I usually don't like open world games that much, but this didn't feel like a video game anymore to me. It felt like an experience. It was one of my top three video game experiences of all time and I'm truly grateful I was able to experience this ride.

This is a fun game with strategy, a mix of Assassins Creed, Red Dead Redemption, and with a pinch of challenge. I love the way that over time, the enemies make strategies to resist you. I really love this game. You can play with staff, kick sheep, punch things, steal soldiers, find puppies, ride things, and everything in the real world. What's to hate?

I think this deserves to be tied with or just under MGS3 for best game. While they are two very different games, Phantom Pain is an astoundingly awesome entry into the open-world genre which incorporates lots of game mechanics from previous games, but since it deviates so much from the traditional Metal Gear formula, I'd say MGS3 retains the crown of the best "true" Metal Gear game.

Honestly this is the best metal gear. It has the best gameplay, the best levels design, a fascinating story and unlike the rest of metal gear, here there is a lot more gameplay than cinematic.

This is my favorite game ever.

A good game with a stupid name.

This is honestly my favorite in the entire franchisee because its like... I don't know but I love the cut scenes and the interaction cut scene's. The only bad thing is the torture chamber escape because you have to mash down triangle still 10/10 IGN Rating

Amazing! The story, the action, the strategy, the amazing boss fights! The best boss fights I have experienced in a game in a very long time! Plus the cool art cutscenes!

Incredible! Loved the Operations side of it. Recruiting soldiers and building up the base felt great. Downside was the bosses and I didn't have that great of a feel for the cutscene style

Much better than Peace Walker. Real bosses and real story. This is NOT a build-your-base simulator where you fight robots. This is a solid game =)

Calling to the Night... That's it

The original one that revolutionized the stealth genre of gaming. Nothing more to say.

An incredible remake. It's a golden piece in the saga.

Great game only problem is it's too short.

This is an amazing game! It has the best Metal Gear game, along with Metal Gear Solid 2, both with improved graphics and HD! I can't get enough of this duo!

10/10 greatest game most underrated game in the series I play this game daily I have 500 hours or more I can't stop playing screw metal gear solid 2 or 3 this is the best THANK YOU KONAMI!