The Top Ten
1 Shout at the Devil 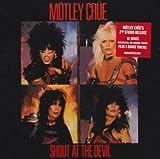 Just found this album at a local used record store and had to buy it as it took me back to 1983 all over again. When I first got this album at age 14 my parents were shocked at its pentagram and inner pics of the band but to me it was great. This is the album I think of as the definitive Crüe album. It launched their career for sure and in my opinion is their best work. After this album the band was torn apart by drug use and in fighting but for that brief time in the early eighties they rocked it.

Crue at their best! This was the time when they really were a heavy metal band, no messing around and just pure metal. With classics like the title track, "Looks That Kill", "Too Young To Fall In Love", "Ten Seconds To Love", etc. You know you're in for a treat.

Looks that kill was my introduction to the Crue, and to Mtv power hour! Rock music has been a staple in my life since then.

Not number 1? All the hits are in this album
Shout at the devil
Too young to fall in love and everything else come on vote up

Most of people don't like changes, is ac/dc not ac/dc without bon scott? Its deep purple not deep purple without ian gillan and replacing him with coverdale/ hughes?
Don't be fool john cotabi it way more better singer, guitarrist, composer than neil!

Every song on this is effing great! Yes I love "Kickstart My Heart" and "Dr. Feelgood" but "She Goes Down" has gotta be my favorite. Although, every song on that album could be a (hit) single!

What can I say?! Dr. Feelgood, Kickstart My Heart, Without You, Same 'Ol Situation, Don't Go Away Mad. Those five songs speak for themselves. Definitely their best album!

3 Too Fast for Love

In my book first and most creative work from Crue totally different from everything around in those days. Sound like Cheap Trick meet Sweet meet early NWOBHM really, really impressive.

Granted I love every album on this list except for the self titled one of course, but Too Fast For Love was extremely edgy.

Great songs from a young and hungry Crue. This album really shows where Nikki's influences lie. And the music is top notch. My favorite Crue album

RAW POWER... I love hearing a band that isn't over produced. Honestly, would love to hear all their stuff produced this way.

This album has the best Motley song on it, Louder Than Hell.

Amazing album from start to finish. Dr Feelgood had more commercial appeal but musically this album is just better. I get why nobody bought it given the time period and the fact that Vince wasn't on it but after hearing John sing the old Motley stuff it makes me cringe to hear Vince try to sing those old songs these days.

The hardest and heaviest Crue album period. Love Crue ( with Vince) my all time most favorite band, but Crue ( with John) much harder. Love it.

This is one of the most underrated hard rock albums of all time. The only reason it didn't hit big was because Vince Neil wasn't in the band at the time

This album deserves more attention, heavier and much better than the dissapointing, saints of L.A. For me the worse

It's not the best but it definitely better than the Corabi Album, New Tattoo, and Generation Swine... so basically the best album they've had since Dr. Feelgood... My Peronal Opinion: 1. Feelgood, 2. Shout, 3. Girls, 4. Theater of Pain, 5. Too Fast For Love, 6. Saints, 7. Supersonic (If considered a studio album), 8. New Tat, 9. Swine, 10. Corabi Album

The title track is pretty good. I don't think any other kickass band have release a song as good as this years after their heyday.

This is my 3rd favorite. 1. Too Fast 2. Shout and then there is this classic. It ddefinitely didn't get the respect it deserves but the guitar sound is crunchy, Vince sounds great. Nikki has delivered the best Crüe sleaze since the 80's

The Contenders
11 Carnival of Sins Live

You pretty much have to vote on this one, if it is here.