The Top Ten
1 The Downward Spiral 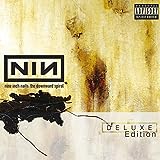 Pretty Hate Machine was sort of like marking the end of the synthpop era of the 80s and thus he wasn't exactly original and The Fragile was marking the beginning of a new era in how he produces music...he has kind of been going the same way for the past decade or so, ever since he came out of rehab...

This is why it is between this album and the Broken EP which is the best work they have put out to date...

A masterpiece. The Fragile is also quite good, but this album was so creative in its destructive and volatile nature...first work I ever heard by Trent...

A masterpiece of an album. Definitely the greatest nine inch nails album.

This album is the Dark Side of The Moon of industrial rock.

This double cd is Trent at his very best. Yes, it's flawed, but the amount of stuff he throws at you that works is remarkable, whether it be the sheer brutality of the albums opener, or sublime instrumentals that build into a crescendo of grief and emotional outpouring. Reznor is one of the few musicians who can whisper his message, yell it, scream it, or say nothing and still move you to to the core. Yes, it's a band, but this is Reznor's baby thru and thru. Damn! I've just talked myself into playing it.

This album may not even have the majority of my favorite NIN songs, but it does have a seamless experience that evokes both wonder and pain. The opening track is an amazing rock song of hate, and throughout the album it shifts into the emotions of desolation and despair, ending with The Great Below. As an album, it is perfect - and the nah nah nah's in The Day the World Went Away are definitely the best part!

The Fragile is long and takes multiple listens for the listener to even begin to grasp the length to which Trent poured his soul into this album. It's a double disc LP and each disc has some of Trent's most intimate and yet aggressive moments up to this point in time. By the time The Fragile was released, this had been his best produced album. The songs that are the best from The Fragile include THE BIG COME DOWN, WHERE IS EVERYBODY? , and THE FRAGILE. Listen to these tracks!...Especially if you aren't ready to invest into a full listening of the LP. Also, check out NO, YOU DON'T.

Seems like the perfect evolution of The Downward Spiral.

Although "With_Teeth" is also great, this album is the best. Catchy but very dark album with memorable songs such as "Head Like a Hole" and "Terrible Lie".

This is what put them on the scene to begin with...

Should be number one. Their first album ever.

Great production and best beats. Very cohesive, yet it feels massive. Songs like "Everyday is exactly the Same", etc.

So underrated. The production is amazing. And "Only" might be the ost lyrically fascinating song by any band ever.

I never get tired of this album.

This is magic. True art.

Broken has some of the heaviest tracks that NIN has ever recorded. I especially like Last and Gave Up most of all.

Wish and Happiness in slavery are the only Grammys Reznor ever won and they're both on this record.

So much anger and rage is released on this album, and I love it!

Hesitation Marks is the best one. I personally like Trent Reznor's work post Year Zero the best,

10 And All That Could Have Been

How is ghosts better?

I don't know why, but I really prefer this over any other NIN album.

Vote guys, That one of the best of them. Love it. Better than Not the Actual Events deffinitely

17 Further Down the Spiral