The Top Ten
1 In Utero 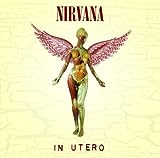 Nevermind is a brilliant album, an absolutely brilliant album. When I was about to listen to In Utero, I thought to myself that this cannot beat Nevermind. Nevermind is a classic, one of the best-selling albums of all time and one of of the greatest albums of all time. But when I listened to the entirety of In Utero, it made me want more from Nirvana, it made all of us want more from Nirvana. I couldn't explain it, but In Utero gave me a feeling I've never had, a feeling that cannot be explained. Nevermind just didn't give me this feeling. With songs like Heart-Shaped Box all the way to All Apologies, It's safe to say that In Utero is an excellent closing to Nirvana's legacy that will never be forgotten.

Although I love Nevermind, In Utero is one of the most gripping albums that has ever graced Music. Unforgiving and Unbelievably depressed, In Utero is the album their masterpiece, an Immense album that dwells darkly into the psyche of Kurt Cobain, making his death all the more painful. Nevermind set them up for Perfection, and In Utero capitalized on that promise.

Very different than Nevermind better than that album.A lot of noise rock and very Grungey Dirty production of the album.All the songs are great and the Magnum Opus of Nirvana. There are heavier tracks like Very Ape and Heart Shaped Box but,there are softer songs like All Apologies and Dumb.Sad that Cobain died he plays simple guitar riffs on this album but that's what makes his playing great.Dave is an awesome drummer and Krist is a great bassist and he has great bass lines and inspires me as a bassist myself.

Nevermind may have the "better" or "more fun" songs to listen to, but the In Utero album as a whole is my favorite album of theirs. There is something darkly beautiful about how unique, raw, and personal it is.

No controversy here! However alternative you consider yourself within alternative rock, this is one you'll return to endlessly. Maybe it's because the singles are overplayed, I like the second half of the album even more.

In Utero is a good album but this is far better and should be #1.

Classic album. This should be #1- seriously!

Whilst this isn't Nirvana's most interesting album in terms of lyrics and instrumentals, and they do kind of wear their influences on their sleeves, Its simply the most energetic and entertaining from their discography. It provides a pure thrill ride of raw, distorted anger which they never quite presented in the same way after.

This is absolutely the best Nirvana album made. This isn't just pure grunge but when Kurt Cobain was at his best. All these songs are awesome.

Fantastic anger in these lyrics, she's what real music sounds like. Songs like Negative Creep really show the aggression in Cobain!

Their most underrated album. I like every single song.
Nevermind wasn't really grunge. Bleach is pure grunge with amazing lyrics.

Shows a calmer more talented Nirvana, behind the screams you find real emotional depth, plus a outstanding cover of Bowie's 'Man Who Sold The World' in my opinion better than the original, can also be heard on the best of.

My personal favorite. This album is everything grunge was meant to be: Raw, nihilistic, and just a good album overall. I understand that Nevermind is seen as the best by many, but if you want less commercial strip-downs, this is where it's at.

For a rarities album you won't be disappointed, obviously weaker then the studio releases but still worth a listen.

Live at reading has a bunch of great tracks of of bleach one off of in utero and a bunch or good songs off nevermind. It also has so much energy that it blows the listener away. Definitely pick up this record

Although not highly rated it does contain a lot of hits performed live plus rare tracks I have found nowhere else.

Could contain more from Bleach, but the content is amazing, no bad songs, but really should be longer, more rarities and a second disc would be more satisfying.

8 With The Lights Out

9 From the Muddy Banks of the Wishkah

If you love Nirvana buy, if there average to you don't, contains a few rare tracks but it's nothing special.

More tracks you won't have heard, in fact you probably don't know this one exists but for a hardcore fan it's essential.

The Contenders
11 Sliver: The Best of the Box

Personally not fussed about this it's an album for money in my opinion.

I know this isn't necessarily an album, but it's great.

17 Live at the Paramount