Sony has come a long way with their PlayStation brand publishing 5 different consoles so far and a lot of variations. This list is complete with all consoles and most notable variations of them.

If you disagree, please vote on your favourite. 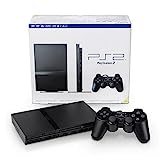 I like them all, but this is one just about tops them. Remains a classic just like the original PlayStation, but what sets Playstation 2 apart are the better features. Design looks great. Can play original games as well as dvds.

One of the highest selling consoles ever, and really set the bar for the next generations.

Has the best games.

A close match-up between ps3 and ps2. Both offer a great experience but ps3's still lively free online capabilities need to be praised

My dad owned a PlayStation 3 and he let me try it out once I tried it out I loved it I played it almost everyday but then around September or October 2014 something went wrong with it and it never worked again. There will never be another PlayStation 3

Backward compatible PS3 plays all PS1 and PS2 games. Can't imagine the PS4 will be able to match the greatness of the PS3 but hope I'm wrong. This system is just completely awesome. I think I can probably play it forever and be happy. The catalogue of incredible games is just awe inspiring.

Final Fantasy 7 is the best game released on any of the PlayStation systems, in my opinion. This console had many great unique games on it.

PS1 was and is the best console ever by far.

Lol all the people saying "pLayStATiOn 2 ThE bEst.'' losers

You can do more than just play games. You can go on google, Skype, YouTube, Netflix, and so on so on so on. That is why the ps4 is the best PlayStation console. It should be number 1

This console is one of the so far BEST home consoles (in my opinion) keep it up Sony :D!

Umm it's the receny

I can take it all over the places I go

It's a PS2 right in your hands for gods sake!

The best with the graphics

If PlayStation 2 is better so put ps4 pro just 1 or 2 number ahead.

Shut up, PlayStation 2 is better you freaks. - Gehenna

This should be the best

A poor mans Xbox One X

Well this was the first handheld not the psp

This console is the worst the original psp is the best

This is the PS4 I use and have. I enjoy gaming and watching movies and media on it. Despite the small amount of storage. (Which I fixed by getting a 2TB hard drive), There's a lot of bundles too. I got mine with Uncharted 4 (Which is a great game to start off with)

Mine is a 1tb system and all I can say is I love it is very quiet and feels like an improvement over the original PS4 in my opinion. It's over a solid console.