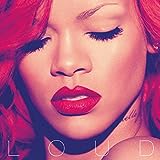 Everyone loves this album. This has more pop hits than her other albums Good girl gone still good though but that album still lack something. Rated r, talk that talk and unapologetic have the attitude but few potential hits. Anti is a masterpiece but that album isn't radio friendly. Loud standout among the rest because it's just a chill album

Loud is her best album by far, Good Girl Gone Bad: Reloaded was near great too, but when you compare Only Girl, What's My Name, S&M, Man Down, California King Bed, etc beat songs like Umbrella, Distribia, Take a Bow, Don't Stop the Music, etc, but what makes this album stand out further it has no fillers. Rated R was not so bad, but was dark even though it had great singles like Rude Boy. We Found Love, Diamonds, Stay, Cockiness where great hits from Unapologetic, and Talk the Talk but the albums aren't as special as Loud. Her first 2 albums I honestly didn't bother to get them I just got SOS, Unfaithful, and Pon De Replay so I can't judge the albums, Anti sure stands out, but not her best album at all she could've done way better for making us wait 4 years, and we don't get half the goodness in Loud I don't think the album deserves to be her best though the album has some good singles, but who knows maybe her next album would be better than Loud.

This album makes me feel good not like the DARK, CRAPPY, RATED R! Each song is brilliant! The song that are Very good are s&m, only girl, what's my name, cheers, and man down!

S&M, O.G.I.T.W, California king bed, complicated and what's my name really took this album down the road. Anti is great as it has songs like work, needed me and love on the brain but they aren't as strong as loud. Unapologetic and talk that talk have great singles too like from U- diamonds, stay, what now. T.T.T- we found love, where have you been etc. They're on the same level for me but not as fierce as loud. Rated R and good girl gone bad have incredible singles too. The highlight from rated r is rude boy and the highlights from GGGB are take a bow, disturbia, don't stop the music etc. GGGB would be 2nd in my ranking, but rated r down the spectrum. Then there's the two earliest of Rihanna's albums. to be honest the only songs I know from both of them are unfaithful, pon de replay and SOS but that's it. My ranking
1) loud. 2) Anti. 3) GGGB 4) unapologetic/ talk that talk. 5) rated r. 6) a girl like me. 7) music on the sun. I couldn't choose between talk that talk and unapologetc.

No matter what people say, this is Rihanna's best album. Some say it is so dark and creepy. Yet, we have songs on here like Rude Boy, Photographs (a remiscent song that a lot of people can relate to), Hard, and Rockstar 101. Also, who cares if it was dark and creepy? It was HONEST. These were the emotions she was feeling. When she felt angry/vengeful, she communicated it on Fire Bomb and G4L. When she felt sad and heartbroken, she communicated it on Stupid In Love and Cold Case Love. When she felt like she was in charge of her own life, she sang on Wait Your Turn. When she felt fearful but accepting of what is to come she communicated it on The Last Song and Russian Roulette. And there was still time left for storytelling on Te Amo. All in all, this album tells a story. A fluent story. This album represents a landscape of emotions. Lyricwise, productionwise, and even vocal wise, this is her best album. It's just that people can't appreciate it for the masterpiece it is because they ...more

Rihanna was raw, deep, honest, and did not ignore the topics surrounding her life. Not only did she address these themes honestly, she did so and came back fighting. I'd also like to ado that she changed her sound. That takes guts even though she established herself with GGGB she did a good job of holding and advancing her position as an artist.

Rockstar, Rude Boy, Te Amo, Hard... Oh, well I don't have to list all the songs. Listening to it right now, have forgotten how great this album is. Emotion, power, style, great music - best Rihanna album!

It includes great tracks like Rude boy, Wait your turn, Te amo, Russian Roulette and Hard.
I think this album has no bad songs,
I even like the so underrated "The last song" and "hole in my head"!

This is surely her best album so far as it has one awesome track, which is TAKE A BOW and a super awesome track, DISTURBIA and remixes of some excellent tracks... My favorite song is Disturbia..

2018 and this album still fire! So many greatest memories and nostalgias tracks and singles on this album. Especially take a bow and hate that I love you. This is rihanna's timeless album

For now that rihanna is slowly fading from music scene. This album still her best. Its simple,no drama about her life, it's all about fun and being herself

ART. Every artist with a respectable career has at least one album that is experimental and creative. ANTI is that album. There are three albums I like from Rih's discography, Rated R, Loud, and now the third is this one. This is no doubt one of the most essential phase in her career, her attempt at being more than a pop star. Although it isn't PERFECT, it shows much more purpose and promise than most of the albums out there of any genre.

After listing to her albums GGGB, Unapologetic, Talk that Talk this is undoubtedly her best albim. I was shocked when it wasn't nominated for album of the year at the Grammys. Rihanna shows so much growth on this album and vocally she gives one of her best. Love On the Brain, Desperado, Kiss Ot Better, Yeah I said it. Thw only had part of the album is when it ends. Her other albums are good pop but this album shows how much of am artist she is. ANTI should be much higher on the list!

I've listened to evey Rihanna album since good girl gone bad. This is by far her best album. Is it full with dance pop songs like her previous albums? No. But its Her most cohesive, finessed and personal album. Her vocals re beautiful and it is a masterpiece. ANTI will be remembered as one of the best albums of 2010s in the future

Listen to the album completely, and tell me if there is a better album artistically from her. Highlights:Consideration, James Joint, Kiss it Better, Work, Desperado, Needed Me, Love on the Brain, Sex With Me. This is also the only album that lacks fillers.

I think it's my favourite album from her, because it came out in 2011 when I just started listening to her music. She's even first artist I was listening to. Honesty, I started listening to music when I was 10 and first 2 years when I was listening to music it was only Rihanna, nobody else. And I don't feel embaraced, cause she's definitely has so many catchy hits… Like, 100 or even more. I remember the september 2011, releasing of We Found Love, it was such a massive hit. Then on my 11th birthday I received Talk That Talk as a gift from a friend of mine. I was so happy! I'm from Poland and I was 11 so I didn't know mostly what she was singing about Anyway I'm almost 19 and right now I know ;-D I mean, you can't compare this album to Loud or Good Girl Gone Bad. These two albums contain only hits, every single songs on these album is a catchy song that comes into your ear and doesn't come out. Talk That Talk was just a quick-made album to stay relevant after the massive success of ...more

My favourite songs are Drunk on love, We all want love and We found love... By far!

Love love love this album! Talk that talk, we found love and Birthday Cake are my favorites

This album belongs at the bottom. Less than her usual.

Come on guys we are talking about an album that has populer songs like diamonds and pour it up, emotionel songs like stay and what now, songs that we can dance like right now or jump. Except everything we are talking about her first number one album. So tell me doesn't it deserve much, then being in a kind of 5 issue?! At least can't we say this album deserves number 2? I mean billboard made this album number one! So Why can't we? I don't say that loud is not good but I think we do an injustice to this beatiful album...

What an excellent album. It kind of hints for her 2016 album ANTi. A loud proclaimaction of her status, Unapologetic shows everyone all side of her from loud sounds such as Jump, Right Now, Pour It Up, etc. She flips the script with songs like No Love Allowed, Half of Me, Love Without Tradgedy, of course Diamonds & Stay. Notice her individual sound of her voice changes (she has good control of her Bajan inflections on words more so than any other albums. It basically disappeared on GGGB).

Most underrated album ever! In my opinion it's great! There are some cool dance songs like Phresh Out The Runway, Jump or Right Now and beautifull ballads like Stay, What Now or (finally) Love Without Tragedy/Mother Mary! Rihanna never released a bad album! Thumbs Up for Diamonds Rihanna Navy!

I think it's the album with the most Robyn in it. Stay, what now, love without tragedy, nobody's business are songs which obviously are dedicated to Rihannas personal, private emotions. I love this album.

She literally dropped the innocent act and gave into the modern pop stream. However, the following album is when she gained control of her sound again.

It's crazy umbrella was number 1 for 10 weeks in the uk!

Definitely the best, we ride, sos, unfaithful, break it off, and if its lovin that you want part 2 are great songs

"SOS", which became her first single to reach number-one on the Billboard Hot 100

9 Music of the Sun

I only know the songs "If It's Lovin' that you Want" and "Pon De Replay" but I still think the other songs would be great as well.

This is a good album. I mean everyone wasnt really familiar with rihanna's face in 2004-2006 but I always loved her songs

This isn't a Rihanna's album. It is fake.

I love this soundtrack. My favourite song of this album is ''Dancing In The Dark'' but ''Towards The Sun'' are good too! Well, this album IS SO AMAZING.

Wow, this is the best album of Rihanna. If you don't know what album is it, it is a greatest hits of Rihanna including ''Only Girl'', ''Man Down'' or ''Umbrella''.