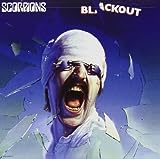 Lots of great albums to choose from but for me this is their best album, the one that introduced me to their music. I think Love At First Sting might have sold better and had more hit singles but this album plays better start to finish. If Rudolf Shenker considers it his best work, then who am I to disagree. Fantastic!

Lots of scorpion albums to choose from however this is the one.

My head explodes, my ears ring
I can't remember just where I've been
The last thing that I recall
I got lost in a deep black hole

Best Scorpions album. Lots of cool songs on it

This has my 2 favorite scorpions songs "falling in love" and "lady starlight" so I must vote for it. The Blackout album probably might be tied for 1st with this one. They both Rock hard. This band and these 2 albums are wheat got me into hard rock and metal.

Loving you sunday morning, coast to coast, holiday, what else can I say, it's the best

Easily their most consistently awesome album. Not a single dud in the bunch.

This album is so very special and containts the absolute best guitar work from Uli Jon Roth and Rudolf Schenker. Listen to songs as Longing For Fire and Evening Wind as well the Title Track or the ending part of Top of the Bill. It's absolutely the best Scorpions album no doubt!

Great album! Sadly the pre 1979 they don't get enough credit. If you don't know Uli it is time to listen to the album. I don't think there is a bad song on the album. We'll Burn the Sky and the Sails of Charon always blow me away. Check out some of the old performances on YouTube.

One of the best Hard Rock/Heavy Metal bands from 74 to 84!

Maybe not their finest hour, but definitely top 8!

The first time I listened to Blackout I was blown away. I was equally excited when I first heard the Uli era albums. I get the same feeling listening to Humanity Hour 1. This is different ... this is cool ... this is a band reaching for more and hitting the mark. Most people will never hear this album, but that doesn't diminish it one bit.

Maybe best Scorpions album ever. Great futuristic album with awesome production a fantastic songs like Hour 1, We Were Born To Fly or The Fututre Never dies.

Really dig this album. There's allot of great song on it. "We were born to fly" is just one of them. It's one of my favorites.

A good album with consistent songs. Serious and conceptual unlike most Scorpion albums.

The Contenders
11 Face the Heat

Alien Nation, No Pain, No Gain, Woman, Under the same sun... Criminally underrated

12 Sting in the Tail

Their best album since Love at first sting in my opinion. Great rock songs such as Raised On Rock, Sting In The Tail, Turn You On and Spirit of Rock and beautiful ballads such as The Good Die Young, Lorelei or The Best Is Yet To Come.

14 Fly to the Rainbow

One of my absolute favourite albums of all time. Will never grow tired of listening to this masterpiece, with so many great songs on it!

Amazing live album! Don't know why this is so low. Should be top 5 in my opinion.