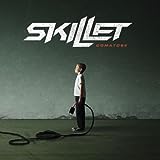 While the softer songs dilute it, Whispers in the Dark instantly made this an all-time favorite with most of the people I knew (and with me as well). Some of the songs on here, outside of Collide, I think is the only album that flirted with metal (instead of the radio or "pop culture") and did an awesome job at it!

Comatose and Collide are the best Skillet albums because they don't lack that creative spark that Awake and Rise was missing dearly. In fact, I don't feel bad to say I do not like either album anymore.

I agree that this is Skillet's best album. I wish Skillet would go back to the way they were on COMATOSE. Most of the songs on here are the best of all Skillet songs.

Even as someone that loves heavier metal and hardcore, this is my favorite Skillet album by far. The soft songs did not 'dilute' this album... they made it! Killer album all the way through

Channeling the voraciously symphonic, progressively-tinged rock-metal of Comatose into a far more melodic and bombastic framework, the passionately energetic record is streamlined by nature yet ambitious in practice. Ultimately, it is their pinnacle critically and commercially, with no other effort by the band quite achieving the soaring heights of 'Awake', whether it be the subdued introspective-melancholy of "Lucy" or the fiery inferno of "Hero" or the technically-inclined "Dead Inside"; and, of course, it is their strongest selling and charting album to date.

First album to feature the gorgeous Jen Ledger on drums as well as having 3 of their mega hits: Hero, Awake and Alive and Monster. While the tone is generally soft the songs have such meaningful lyrics and are sung with such passion that you'd have to be cold hearted to hate.

With Awake and Alive, Dead Inside, Monster, It's Not Me It's You, Hero, Don't Wake Me Up, One Day Too Late this has to be the best album.

Awake might be a little soft but it represents almost everyone's life in its lyrics... Just too good.

It's a shame that everything skillet released before comatose is now almost completely forgotten or not played at all. Most of their set list now contains songs from Comatose, Awake and Rise, maybe 1 song off Collide. Which is disappointing, I think AY/I songs should be included in their setlist.

By far Skillet's heaviest and most aggressive album so far, this album has a lot of power, and Collide and Savior are so awesome.
I honestly love Collide, Comatose and Awake equally, all three are amazing albums.

Collide's lyrics are just so much more powerful than any other album of theirs. Like open wounds, savior, collide, forsaken, and my obsession better than Rise and and Awake but not better than Comatose

Collide is their best album, songs like Forsaken, Savior, Open Wounds, Collide, Imperfection, and Cycle Down are the best!

Rise is a fantastic album with mature lyrics and awesome music. It's a must-have whether you're religious or not. Been a fan of Skillet for a long time, and this is perhaps my favorite album they've ever made.

The lyrics are a lot more passionate, which has always been the thing I like about skillet. Also, there is more of Jen Ledger than Awake, which makes this special.

Alive is their latest album. John Cooper tries out completely new sounds and really does a great job of mixing the old Skillet with some techno sounds.

The lyrics are fantastic and so is the music. They are getting back to their roots with this album! Hands down their best work yet.

From my standpoint, this is definitely their best album followed by Awake and Comatose...I downloaded it with the intent to receive at least a couple of Bad Ass songs...but boy I was so overwhelmed that I couldn't delete a song...almost 95% of the album was brilliant...with each song had some special distinctive quality that appealed to my senses...

This is ' bold and ultimately addictive! I get it that people do not tolerate the new sound in the album, but they can't keep recycle "Comatose" or "Awake" over and over or "Collide" for that matter. They have once again show us why are they Skillet.

This album is alright in my opinion. Although I'm not a huge fan of the pop vibe to it, I'm glad skillet actually changed their style a little bit instead of repeating comatose on their previous records.

Feel Invincible, Out of Hell, The Resistance and I Want to Live are very good songs for me. I know there are some experimentantion on several of the songs, but still is a solid sound in composition and interpretation. At least for a 5th place not 9th

Best album ever songs like alien youth, vapor, earth invasion, kill me heal me
It's just a great album
I know it sounds alieny and all but I gotta say I'm impressed
I know it's not as gd as awake or comatose but it's definitely a great album you gotta get it

This album acts as a greatest hits compilation, and also exhibits just how amazing they sound live, as well as their fantastic stage presence. I don't normally like live albums, but this album is simply phenomenal.

Just listen to the song live free or let me die... You will be amazed it's an awesome song from this album!

Finish Line and Save Me are two of the best songs of all time! This album needs to be higher.

This is the epitome of Skillet albums!

This album is awesome. The melody and all are superb. I'm in love with it right now. Just listen to rest, invincible, each other and best kept secret.

Ranking this one last destroys the ranker's credibility in my eyes. This is my absolute favorite Skillet album. So raw and exciting.

The Contenders
11 Hey You, I Love Your Soul

I don't know, I think I'll pick this one ahead of invincible. opening track is excellent, nice hard rock rhythm throughout the album.

Who says this is skillet's worst album, I know it isn't the best but its awesome. Songs like hey you I love your soul, whirlwind, scarecrow are even more awesome. You must give it a listen.

This remix album is just the thing for remixed lovers like me. In this album, awake and alive is more awesome than the real track and in monster, jen ledger's female part was awesome.

This album, while it's not really a Skillet album per se, is a fantastic worship album that is spiritual and really makes me want to raise my hands up to God. How can this possibly be labeled as the worst? It's better than Hey You, I Love Your Soul by A LOT.

definitely best album by Skillet. Every song is perfect and Legendary is in top 3 best song by Skillet. Listen to this album and you will found it.