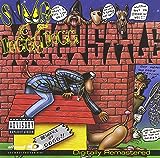 Just such a great album, pretty much the party sequel to the chronic, great g-funk sounds and snoop's raps are rather on point.

Old School Sound + some instruments seem to be live. Amazing!

The blue carpet treatment takes me back to 2006 when I was a kid. that's one of the best albums of all time

Despite the time period it was released in, given Dr. Dre had left shortly before, and Tupac Shakur was killed only a couple months later, this is still one of Snoop Dogg's best albums of all time. So many people instantly talk about Doggystyle when talking about "the old snoop dogg", but to me, this is easily the best representation of his early rap career. This was the last album that incorporated both G Funk and Hardcore rap. Everything from the length, pace, melodies, features, and lyrics are perfect. I would have liked a Dr. Dre feature, but I see how that couldn't have happened seeing as Dr. Dre had recently left Death Row Records. Overall, I would give it a 97/100.

Anyone that rides with G-funk blasting on their car stereos understands that this album is definitive of the genre. My personal favorite and most listened to Snoop album.

A very good album that has all of his best songs. Songs like doggfather, vapors and snoop's upside ya head.

This album is nuts! PEople... get wit it!

The greatest snoopy album no doubt.

My favorite album of him

Very Underrated let's get this up to two yeh?

Quality stuff, Snoop's second best album made even more impressive after he put out his magnum opus 20 years ago.

Should be nearer the top better than coolaid by far!

17 The Best of Snoop Dogg

This is a great album!

Wut? Its not even here? It's the best ''modern'' snoop album by far, even if its actually an EP. Nowadays he doesn't even rap, all he does is chorus' and singing. The stoner's EP went hard, he did the singing, AND the bars, coupled with the great production makes it one of the best albums snoop made.