Vote for your favourite or which you think is the best Sum 41 album.
The Top Ten
1 Does This Look Infected? 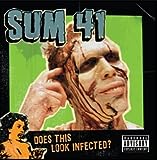 This is their best album with chuck at a close second. Every single song off this album is amazing and you can't say that about AKNF. Although I am not a huge fan of AKNF I can respect that that album has some extremely catchy pop-punk songs but it is nothing compared to the greatness of DTLI.

This is their best album with Chuck at a close second. Every song on this album is amazing and you can't say that about AKNF. Although I'm not a huge fan of AKNF I can respect that that album has some extremely catchy pop-punk songs but it is nothing compared to the greatness of DTLI.

The most raw of their releases. It seems even more raw than Half Hour of Power. Seems to be influenced by thrash, and the song titles are genius. The most punk of all their releases.

Just like the name of this album says, punk rock infected with heavy metal. My favorite album, I grew up listening this album.

2 All Killer, No Filler

Cool album. I love their humour on this and how they're so happy and stuff, and also the intro is really funny. I hate how they dropped the humour in Underclass Hero and Screaming Bloody Murder.

Honestly, this is the best sum 41 album musically, it's a good time, its amazing, its boys being boys... Its albums like this that will always be remembered.

The name said it all, fat lip is definitely the best sum 41 song and in too deep is good as well but I think that does this look infected? Should be number two

A complete album of hits, softer than their future productions, but a complete winner that stumped the pop punk era at the earlies 2000´s.

This album delivers the best of everything from Sum 41. For example it has some of the most powerful and heavy songs in their whole discography (ex. We're All to Blame, No Reason) while also delivering some of the most serene and beautiful tracks (ex. Pieces, No Solution). Anyways, besides containing some of their most skillful and awesome tracks, this album was one of the turning points from from silly to serious, which completely affected everything from their lyrical content to their general sounds.

Because this album was one of their best and most influential, I would opt for this to be at number 1.

Definitely deserves the number one spot. An absolutely phenomenal album. Songs like We're all to blame, and 88 and absolute classics.

I'm pretty picky with my music, usually only liking maybe half of the songs on an album, no matter what the band. But I can listen to pretty much this entire album and love every song (The only two other albums like this for me are American Idiot, and Absolution).

Honestly their best album, with some of their greatest songs.

The entire album has so many stylistic/dynamic ups and downs but still feels like one cohesive masterpiece. Sum 41's meanest riffs, most aggressive drums, most diverse and powerful vocal deliveries...what more could you ask for? No Reason, The Bitter End, and 88 alone should put this one at the top.

Chuck is definitely their best work, both lyrically and musically. It's an almost metal album, so I understand how pop punk fans would not appreciate it, but everything about Chuck, from setting the atmosphere to delivering their feelings of anger and frustration makes it their best album, by far.

This album feels like a bridge between Sum 41's traditional punk/rock sound and a borderline post-hardcore album. Such a perfect blend of upbeat and somber songs, with an impressive three-song suite near the end of the album. Of course, the title track is an undeniable classic as well, and quite possibly the defining track of modern-day Sum 41.

An Absolutely masterful melodic hardcore album showcasing how diverse the band can get from their classic pop punk work. It's Heavy, Badass, And Really Showcases the bands darker side. My favorite of theirs. Best Songs: Blood in my Eyes, Jessica Kill, Hapiness Machine, What Am I To Say, Crash (Really Deep), and of course their masterpiece, Screaming Bloody Murder! Oh Yeah.

At first I didn't want to listen to the album cause I was afraid it would be too different frome the other albums. However a couple months later I did buy it and I LOVED it. It had great songs, it is a bit less pop and more punk and the sound overall is just great. Blood in my eyes is now my favorite song off all times.

Why the hell is this album so underrated?! It's awesome, it's powerful, it's partly very slow and partly very fast, it's just perfect and in my opinion their best!

5 Half Hour of Power

I know it has the least singles but come on these are all solid songs, they have dome of the best riffs and lyrics ever and I think it deserves more

I've always loved every Sum 41 album. This album was the last one I heard by them because not as popular as the others. Which is sad.. Because this album showed meaning in every song from start to finish. This album shows what reality is like for those who are stuck in the hardest times. This is by far not only the best Sum 41 album ever, but possibly the best album ever! However, not my favorite band.. Top 3 though. Blink-182 will always be my number one!

Come on people, let's be honest here Chuck was great but it was more or less Alternative Metal than Punk. This is more Punk. Best songs are: With Me, Walking Disaster, Confusing and Frustration, Underclass Hero, Speak Of The Devil, March Of The Dogs and Best Of Me. That's 7 good songs on one disc! The rest aren't bad either by the way.

Sums are amazing band, but there are better, we know it, but not as punk rock pop punk band. There are bands like Led Zeppelin, Queen, Pink Floyd, AC DC, Linkin Park, Metallica etc., who 'll be always on the top, but I 'm sure that in albums category, as the whole unit, this is the greatest album in the history of music.

This is obviously the best album by Sum 41, with walking disaster, Best of me, speak of the devil, Underclass hero, With me... and every single single song in this album is just.. AWESOME! Sum 41 is the best band ever! nothing to say about that!
Chuck, All Killer no Filler, Does this look infected, are very good, but this one is the best one, for sure! :)

This was a very good album. It had 3 great singles and 3 great guitarists. songs such as a murder of crows, the fall and the rise, damn I'm dead again, and twisted by design also caught my eye they combined old sound with new sounds and it is amazing. I would say this is their best album.

Fake my own death is great. War was kind of disappointing.

Good but not the best

How can this NOT be first!? It has most of their best songs on it like In Too Deep, With Me, Still Waiting, Hell Song, Fat Lip etc.

9 Does This Look Infected Too?

10 Go Chuck Yourself
The Contenders
11 Order in Decline

The best production since Chuck, in my opinion. The new era of the band, finally they found their identity. Agressive, politic and mature.

Definitely one of their best jobs!