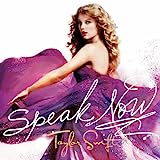 Speak Now was the first album by Taylor that I bought and I got into it immediately. I feel like her songwriting was so beautiful and on point and even though that is the case for all of Taylor's albums, as a fan, you know that lyrically this is her best one. Every single song on this record sounds like it could be a poem and every line hits you harder than the one before. Obviously this isn't an album you would listen to on a night out with your friends (like "1989" or some songs off "Red"), but if you just sit down and listen to this masterpiece, you would know what I'm talking about. As if that is not enough to prove that this is the best work she's done, may I add the fact that she wrote this album ALL BY HERSELF!

Best lyrics (in my opinion and to be honest, there are only very few selected ones because, as I said, the whole album is flawless):

"But I took your matches before fire could catch me so don't look now, I'm shining like fireworks ...more

Speak Now is the kind of album you listen to when you want to listen to music, but don't know what. (This is NOT an insult). It's just perfect for whenever, wherever or however your feeling! The song is really good too, and if she actually did THAT at a wedding, she has guts! (Not saying she doesn't it she didn't)

Hey, hey, hey! Just think while you've been saying that Taylor Swift doesn't write her songs, you could be been listened my to this, knowing that. She. Does.

RED has to be one of the best albums made in the 2010s. With catchy hit songs like "We Are Never Ever Getting Back Together", "22" and "I Knew You Were Trouble" it has become clear that Taylor does not want to keep doing the same thing over and over again and change things up a bit. However, there are still many songs that show off her songwriting skills and prove that though she keeps things exciting by trying out new kinds of styles/genres of songs (before mentioned), she's still the same songwriter; State of Grace, Red, Treacherous, All Too Well & Begin Again are only some examples of that.
And you can't deny that this album contains many of her best lyrics she's written (including myself as a fan of hers for almost five years now), like
"You call me up again just to break me like a promise, so casually cruel in the name of being honest" (All Too Well)

Overall, RED is simply a roller coaster of emotions and makes you feel something, which I personally think is ...more

Oh yes I really like Red by King Crimson. In the Court of the Crimson King is even better.

I gotta admit, that before I listened to this album in depth, I wasn't so into it. I'd heard the more popular songs like 'Red', 'We're Never Getting Back Together', 'I Knew You Were Trouble', and etc, and I expected the entire album to be bubblegum pop and crap.

But as I became a more indulgent Swiftie, I noticed some of the lesser known songs from Red that make my heart ache, like Treacherous, Sad Beautiful Tragic, All Too Well, Stay Stay Stay, and can I just say the entire album?

I listened to it on repeat until all the lyrics were ingrained in my heart and I cried until I felt like a new person.

This album is simply amazing. It is lyrically genius, combining the simplest of memories and snippets of life and intertwining them with heartfelt emotion and poetry that made me see the world in a new light. This is Taylor at her best: this was the album of her career. I am proud of her no matter what she does, but I have to say that we're all going to look back on ...more

1989 is an example of what makes a good pop album, even now that mostly everything has been tried out before. It also marks the most significant change in Taylor's music, since it is in fact her first official pop album. However, you would not expect this to be her first, since it sounds so perfectly done. I myself, as a long-time fan of hers, was a little skeptical at first, but when listening it to the first time, I knew this was a masterpiece all along. Her lyrics are still as meaningful as they've always been, even when they're not her most personal songs to date. Lyrics like "When you're young you just run but you come back to what you need", "They are the hunters, we are the foxes and we RUN", "You're still all over me like a wine-stained dress I can't wear anymore, hung my head as I lost the war and the sky turned black like a perfect storm" really prove this.

Additionally, it is the first album by Taylor that made me dance crazy in my room ...more

To me, 1989 isn't just an album. It's a masterpiece. All of her albums are excellently written but 1989 has the kind of lyrics that you need to analyze to understand the deeper meaning. It has so many deep meanings and I'd be so happy to explain every single one of them because I want to show everyone how good of an album it is. And the melodies? Perfect melodies, catchy but not repetitive. Which means perfect of course (for me and many others). My favorite track from 1989 has to be "Style".

This album has plenty of great songs by Taylor. Personally, it was one of my favorite albums from last year. Wildest Dreams was just amazing!

This album is my favorite. With cute, catchy, lyrically amazing songs like Jump Then Fall, Breathe, Fearless, and others, this Album I can truly never get over. Speak Now is my second favorite, and then Taylor Swift, 1989, and Red. Red started delving into pop already and I didn't really like 22, We're Never Getting Back Together, or I Knew You Were Trouble as much as I liked any of her songs, so that's probably why I didn't likes the album as much, but I love every song from Fearless to the death and this is the most amazing album ever. enough said.

Fearless has to be up high since it is the album that made her famous - which is not undeserved! This album is the perfect mix of country-pop and it makes me feel nostalgic for some reason. I think that this album resembles their high school years for many people, especially girls, because of songs like "Love Story", "Fifteen" or "Fearless" - all dealing with topics like forbidden love, realizing the mistakes you made in the past but having learned from them or simply, first kiss/first love.
Love her voice, her lyrics, her melodies on this record!

I love fearless, Taylor swift, and speak now, red, not so much 1989 though

Reputation, the second pop-focused album by my favorite artist Taylor Swift, is a real masterpiece. Reputation is different from all of her previous masterpieces. The album's new style got me screaming the lyrics on November 10, 2017. It's an album which deserved much better. With songs like: "...Ready For It? ", "I Did Something Bad", "Don't Blame Me", "Getaway Car", "Delicate" and others, it's the best album ever made. In this album she shuts all that is said about and declares that her real version is a lot different than the version created by MEDIA. Taylor Swift's best lyrics are fitted in the right place and at the right time. The song "So It Goes..." is really a very catchy song but I don't understand why everyone skip it many-many times. Best album ever made, and deserved more nominations in the 61st Annual Grammy Awards. This album will be my "Album of the Year", "Delicate" will be my "Song Of The Year". Enough explanation given.

THIS ALBUM IS WAY BETTER THAN DEBUT ...more

I absolutely ADORE her new style! All the songs are amazing, but I have a few favorites. "Getaway Car" (probably my #1 favorite) made me feel like I was being chased by the police in a car without a roof at night, screaming with laughter and feeling free. "Gorgeous" describes my crush exactly, and the run away with me line from "Call It What You Want" makes me squeal every time. "This Is Why We Can't Have Nice Things" is savage, and I would LOVE to see a music video of "I Did Something Bad." I get chills just hearing it.

This is my favorite album of all time! It has my favorite songs like "Delicate", "Look What You Made Me Do", "This Is Why We Can't Have Nice Things" and " Endgame"! This album should be number one! I wish all the songs had their own music video!

Loved it. When I first heard Look What You Made Me Do, I thought that it was kinda crappy, but when I listened to it again, I enjoyed it, and after listening to it enough times, I ended up loving it! With most of these songs, you just need to listen to them a few times and you will see just how great they are! Hoping for a music video for Gorgeus, have come up with my own idea for one in my head, if she ever makes one, it will probably end up nothing like my imagined one

Hold it right there... Reputation is way better than her debut album

Should be third after speak now and red

Is this an album or herself?

I would be complex, I would be cool. They'd say I'd played the field before I found someone to commit to...

I stayed up until twelve a.m. waiting for this album after I woke up at three in the morning before, and it did not disappoint! It has a song you play during Christmas time, a song you dance to, a song that you can cry to, and MANY more!

Lover song from Lover album is the best song ever she made.This album is my favourite.

Come on taylor. Do better

11 Sounds of the Season: The Taylor Swift Holiday Collection