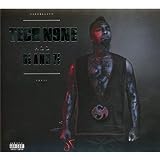 This Album gets you on the right mood!

Tech gets better with age

Am I A Psycho, Worldwide Choppers, Mental Giant, So Lonely, I Love Music, Love Me Tomorrow, Mama Nem, and Promiseland. Techs best yet. Period.

KOD was the first Tech N9ne CD I bought! When I lost my grandmother I was sunked into a low place but that album was life changing for me

The darkest tech album yet blackened the sun, low, and K.O.D. are my top 3 songs on this album

I know tech hates it, but I love it... Sorry Tech.

No can do for the win

A double disc album full of great songs. Definitely one of his best of not the best. Like yeah, everybody move, the waitress, happy ending, psycho bitch 2 etc etc

Beast seller for a reason

This is one of the albums that shows his willingness to cross genres and do it with an interesting approach. Not to mention the only album to include an Eminem verse, combined with insight into thoughts of losing a loved one. It's a very powerful album packed with lots of emotion. A personal favorite It's hard to go wrong with this album. Love the skits thrown in.

If Eminem wouldn't have collaborated with tecca Nina I wouldn't have discoverered this genius and wouldn't have listened to speedom along with this album and all the other albums. After Eminem techn9ne is my 2nd favorite rapper (but honestly techn9ne is as good as eminem)

Absolutly amazing album, expesially after how long he's been in the industry, most people start to fade. Tech proving he's stronger then ever!

This has to be the best album so far even though it is his newest. All of techs albums get better and better each time!

This and relapse by Eminem are in my opinion the best horrorcore albums ever done!

Anghellic is the best in My opinion

It has great songs, like Strange 2013, Straight Out The Gate, Fragile etc. some great featured artists and others not so great, honestly he should work with more independent artist for the next album!

This should be in at least top 5

The whole album was good

He evolves so much that he reinvents himself with every album. This one is solid and should be ranked at least on the top 10

This is Tech's party album, one that you can jam out to anywhere you go. It showed his changing style while still tapping into the stuff that made him famous.

Has some really good songs

This album should be #1 I like the song AM A PYCHO ft HOPSPIN and B.O. B

This album is great, 2 best songs are unfair and who do I catch

14 Calm Before the Storm

This album is supposed to reflect the aspects of Tech's personality. Not to mention some great features

Don't Nobody Want None

This album is near perfect in my opinion. I love the horror theme of this album and just the whole feel of it is great.

This album shows the true rock side of techn9ne.Great album!

His best album so far!

One of his best.If not the best

His newest but one of his best.