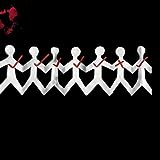 This one was a no-brainer for me because even though most of these albums are pretty great, this one is my favourite by far! The anger, pain, heartbreak, betrayal, loneliness, depression, hope... This album has all of that poured right into it! It is consistent and worth listening to from start to finish!

I hate new tdg but my top 3 are

One x doesn't have a single song on it I hate and it's the only album I can listen to straight through and not want to skip a single song, self titled album has a few songs I don't lime and life starts now is about a 50/50 on good to bad songs

This is by far the best album that they had. Adam wrote most of these songs while he was in rehab. They really come from the soul and have a lot of meaning behind them.

Best album ever put out ever this album is just unbelievably amazing.
Every time I feel like all my problems are solvable

One of my favourite things about this album, is while the self-titled album has a lot of built up anger, and One-X kind of starts off feeling hopeless, but towards the end, you start to see a little bit of light, this one just feels like a more positive album all around, even the title. And if you think about it, those 3 albums really tie in together.

I think the album artwork symbolizes that all of your childhood memories are gone. the past is done (and for good reason). it's time to move on with your life because life starts now. life's too short so live every moment you can of it. dispose of those horrible, painful memories you had as a child because do you really want to live with bad memories for the rest of your life? You're starting to grow up but when you do, never lose your spirit as a kid. I'm not saying to act like a kid, but still be an adult while not losing that fun, free spirit you had as a kid. stay young, wild, and free.

Such a good albums, I stand Classics like "The Good Life", "Bitter Taste", "Break" and "World So Close", were in this album, and these are some of my favorite 3DG songs, Along with I hate Everything About You, Riot, Gone Forever, And Get Out Alive. (Don't get me wrong, I love all 3DG albums, hence my favorite songs, but, this is just the best.

In my opinion the front cover art of this album symbolizes people fighting against fear and mind torture. television, the internet, everything in the media can connect to really disturbing and depressing stuff so these two guys are smashing all of their electronics to not let those imaginary demons follow them everywhere they go on T.V. or the internet.

This was the first album I listened to from them. Songs like I Hate Everything About You (first Three Days Grace song I've ever heard), Scared, Let You Down, Born Like This, Drown, and Overrated are what got me into them. This album is and will always be iconic for me.

This holds a whole lot of the classics. It has a nice feel to the songs. I don't have a problem with any of the songs in this album, unlike Human's The End is Not the Answer.

This is the beginning of Three Days Grace. Post-grunge vibe is so strong in this album. Reminds me about Alice In Chains a lot.

It has such a raw feeling I guess to put it. It feels like real music and I love it.

I know a lot of people don't like this album so much, but I actually thought it was pretty good. The only major problems I have with it are the number of co-writers that were associated with it, and how shallow it can get at times. It definitely doesn't have the same emotion as their earlier stuff, but there are songs like Chalk Outline, Give Me A Reason, Broken Glass, and Unbreakable Heart that really make it worth listening to.

What a great album. I love most of the songs and Broken Glass is my favorite out of all of them. Another lovely album.

Most varied album and expands into new territory. Unbreakable Heart could be their best song.

I like Human but why is it above Transit of Venus...
This album is phenomenal.

It's not bad, but it's very "hit or miss" for the most part. On one hand, you've got some pretty good songs like Fallen Angel, I Am Machine, Tell Me Why, and The Real You, but on the other hand, you've also got some of the band's weakest and most repetitive songs lyrically, vocally, and instrumentally, like So What, One Too Many, Car Crash etc. And you could tell Matt was still trying to adjust to being in a heavier band than he was used to.

I never thought that they would still rock without adam... This album is amazing...
I am machine, tell me why, car crash, human are my favourites...
This is the second best album of 3dg right behind oneX

The album that got me hooked to 3DG in the first place. I will always hold this album close to my heart.

Three Days Grace's latest album, released in early 2018, was a slight improvement over Human, and Matt's vocals are getting better, but for the most part, the songs still feel shallow, overly repetitive, and they all follow the same annoying "look at me guys, I am an outsider, and I'm better than you" attitude, so if you didn't like Human, then you probably won't like this one much either.

Personally this is my favorite TDG album. I really like the approach they took with this album. When it was released I couldn't stop listening to it, it's that good. I.don't know why people hate Outsider and Human so much, they're awesome albums, Outsider has some of my favorite TDG songs, The Mountain, Infra-Red, Strange Days, The New Real, Right Left Wrong and more. I'd give this album 10/10 along with Human, which gets 9.5/10

It was a decent album. Some of the songs were incredibly catchy such as Right Left Wrong and The Mountain.

Not their best work...but nice

7 Live at the Palace

The live dvd that made me want to play guitar just massive musicianship.

Not a lot of people are familiar with this one, but this was Three Days Grace's very first album, released in 1995 when they were still called Groundswell. Although I have always had a lot of respect for how they were able to make an album as young as they were (Neil was 16, Adam was 17, and Brad was 18, but I don't know about Phil and Joe since I couldn't find any information about them), it actually wasn't until pretty recently when it really started to grow on me. I like how different it is from all of their other albums. When you hear about this band, the first thing that will come to your mind will most likely be their signature hard rock sound, but this record is a lot grungier than what they're making now.

This was back then when they were called Groundswell.

This is where it all started.