Have you seen an album cover that has absolutely nothing in it? Here is a list about it just to show and I think you're going to be seeing a lot more of these albums than you have in any time. Here's the list about the most lame and most unappealing album covers.
The Top Ten
1 Tri Repetae - Autechre 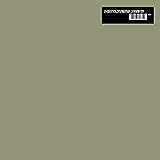 That thing on the corner doesn't count as part of the album cover. This cover is just one solid color. I can see what it is but I can't describe it much. More like dark beige I think.

Great album, but the album cover is easily the worst there's ever been.

Very iconic. How? I don't know. This album cover is just plain boring except that it has the words "The Beatles" in it.

Very iconic, but isn't it called 'The White Album'?

Well, at least they have the names on two corners. But the whole thing is just dumb.

Are you people that lazy that you have to make the entire album cover black? Well, that thing on the top doesn't count as part of the cover that's why. But it's there.

5 Suck It and See - Arctic Monkeys

Suck what and see? The record cover? Do I really need to put my mouth on the record? I see a damaged album that's all.

It's "Still" another one of these album covers with one single color on the background with tiny words. At least they have that logo above it.

It's just the Nirvana logo and that's it. Nothing else, it's just a black background with the logo.

Do we really need to take a picture of the sky? With one boring cloud? Or how about listen to that music darn it.

It's not a cover that makes an album great, it's the songs that the album contains.

You really want to take a picture of a peace of wood and just make it an album cover? What a lame exception.

I personally think on here it works. While yes, basically it's just a unicolored background with the artist name on it, the font and its color make it lool classily minimalistic, much like a box for a luxury perfume.

Just a boring pink font on a black background. Booorrriiinggg

21 Wake Up Call - Theory of a Deadman

If it's four than why would there be four boring rings on the cover and not something else? You know this is just laziness right here.

24 If You're Reading This It's Too Late - Drake

I have this cd, the cover is very dull, so was the cd, I only like one song, the song is "up in the air"