One of the best platformers ever made! So much different gameplays, best graphic, great soundtrack, lots of collectables, epic boss battles, great story, the best game of the entire series! If one day someone is going to do a real sequel to this game it should be a mix between this, Crash 2, Crash 1 all in free-roaming and in multiplayer also online. That's the only game that can beat this masterpiece! Enough with the Titans/Twinsanity crap, I want Crash Bandicoot 4 (a real one, not The Wrath of Cortex)!

This is my Favorite Game of all time. I love the platforming,I love the soundtrack,I love the story,I love the level design,I love everything about this game.

The game is good, had good times with it but it is and you can't say no to this too overrated.

Without a doubt the best game ever conceived by Naughty Dog Studios; Crash Bandicoot 2 - Cortex Strikes Back strikes far out from its prequel and its sequel. What is it, that makes this game so amazing in comparison?

First and foremost, it's the prime example of what a sequel is supposed to be - it didn't just take a step up from the original game, but expanded so much upon it that it became a completely different experience. Yes, you're still crash, you still spin and ruin boxes - but the controls are simply changed from average to nothing short of amazing. Crash Bandicoot 2 may possibly be the game with the best controls I've ever played.

The fun doesn't stop here however, while the 3rd game was superior to Crash Bandicoot 2 in replayabillity (in theory) due to the inclusion of time relics, its levels were far less collected. Crash Bandicoot 3: Warped suffered from a common mistake of platformers; it tried to be too diverse in its levels. Water levels, bike levels, ...more

It's not only the best Crash Bandicoot, also one of the best games ever. If you haven't played it yet, do it, because this game aged like wine.

The game with the absolute best level design of all time. It may lack the relics and graphical updates Warped had, but it makes up for it with its immensely fun gameplay.

This is the best platformer ever released in every aspect. No question about it. 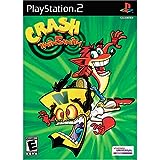 Most funny game ever

It's so amazing. Honestly, who doesn't love the very first game? This is my first Playstation game, and I know the controls are clunky, but I absolutely love it!

This is a great game I have played before and I must say that my first game, this is by far the best ever. With great gameplay and fun levels, this is my most favorite I have ever played. This game is the cause or trigger event of the Crash Bandicoot Franchise. That means that if we never had this game, we would not have Crash Bandicoot 2 or 3! That isn't the big reason that this is the best, It's the great gameplay is what really matters.

This is what started it all! It a surprising amount of replay value due to the way that you had to go back through and collect all the boxes in every level for the gems.

Started the series and while it may not be the best Crash game it was better than Twinsanity. I thought this crash was definitely the hardest but that was the fun of this game and the bosses were crazy much better than the later bosses!

Without a doubt the best kart racer ever.

I have this game, it's fun, can't wait to play the remaster crash team racing, was 15 days away when I added this

Although I love the first 3, especially the third, this one is just so fun! I've played this for hours, and 100%ed the entire thing. Great Game. A Must Play!

6 Crash Bandicoot: The Wrath of Cortex

My opinion the best crash bandicoot. played this a lot when I was young

I love this game. It has my favorite designs of all the characters. I grew up on this game. My parents were Crash Bandicoot ADDICTS. This game has the advantage of modern graphics. The elemental designs were phenomenal. The boss battles were interesting and easy. It's the perfect Crash game.

Many memories of this game. I remember when I played this game with friends and its was amazing! I played all Crash Bandicoot games, and I think that Bash is more fun. No doubt, but, this games is the best multiplayer of PS1!

This was the number 1 game I used to play with my cousins and my dad great memories way better than Mario party let's see crash bash 2 ps3 heck I want any new crash game for ps3 not the titan ones anything else but that.

One of my all time favorite party games!

The ultimate competitive game ever made by naughty dog. I have never played a better crash game like this!

My childhood game. I love the diversity with platforming and racing

This a good game I used to have it - trains45

I have this game it fun - trains45

Really fun and addictive, but doesn't come close to CTR

This game is hard and fun - trains45

This game has 3 of the best crash bandicoot games remastered! Number 1.

How on earth is this not higher? I mean, it's 3 of the top 4 games on this list with updated amazing graphics and many gameplay improvements (especially in crash one) all rolled up into one very cheap current gen PS4 game that is now rolling out onto all systems so everyone can enjoy! It's the definitive crash game! If I knew someone who wanted to play crash but could only afford one game then this game would be what I recommend as the definitive game of crash bandicoot.

It's the best 3 Crash Bandicoot games rolled up into 1! Only difference is the amazing upgrade in the graphics and sounds

11 Crash of the Titans

Best in the series

Best game in the world

This is the best game in the series according to me, just because the characters got a redesign and some things were changed doesn't mean you have to instantly hate it, at least try ACTUALLY PLAYING the game before hating on it.

Crash Of The Titans and Crash Mind over mutant were the only two games where Nina Cortex looked presentable not trash!

I remember this game! - LightningStrike

This is a fantastic game that gives a Crash 3 theme to your portable device: the beautiful GBA (by that time )

A really solid game with fast gameplay and Awesome music. You should play n-tranced if you have the chance. 7/10

The lack of comments on this great game confuse me. It took every great element of classic Crash and adapted it onto the GBA. The bosses are all fun and from the game Warped (I don't see why some of the boss music was switched around though), the levels have the same themes as Crash 2 & 3 and even new stuff like a jetpack level where you shoot down airplanes and zeppelins. I personally think this is a superfun adaptation and I recommend it! 8.5/10

This is okay for Crash. It has some issues, but this is a fun game that you might be occupied. 6/10

I have yet to play N Tranced but I still think this is Crash's best GBA game!

Hard but fun. The fan service is amazing.

As Good, If Not, Better Than The Original.

This game should be number 1! because it's remastered of best kart racing of 1999. and got better graphic, controls, gameplay, music and more. and also it has crash nitro kart's track, characters and PLAYABLE BOSSES. this game has all your favorite crash bandicoot characters. and also you can customize your kart and your character skin. you can play adventure mode with any character. you can complete grand prix challenges and unlock some new items. you can play online mode and earn wumpa coins.
this dream game of all crash bandicoot fans. and I will give it 10/10.

This Soundtrack Was Great

Why isn't this super fun game higher up than Mind Over Mutant?

Why Coco Bandicoot's short temper?
I think this is due to her round face, her bulbous nose, her voice, her fully blonde hair & that she is the smallest bandicoot, & even chronically the youngest.

THIS GAME SUCKS. THE GRAPHICS, THE GAMEPLAY, THE CHARACTER DESIGN AND EVERYTHING ELSE IN A GAME. BURN THIS GAME TO HELL!

Worst crash racing game...no...it's the worst android racing game! serouly,crash mind over mutant is not too bad,and crash boom bang is bad too!

Ha! crash bandicoot is a girl because he's purple!

The mini-games are fun, and the graphics are good. However, the gameplay is mediocre. I give this game 56/100. But hey, that doesn't mean I don't want a remake of this & Spyro Orange: The Cortex Conspiracy put together into one game. They should at least make it better. Seriously, this game should have better gameplay.

Spyro Orange is a Crash Bandicoot game, too.
They both rocked.
If only Crash Nandicoot were eventually voiced by Olly Murs. He needs to talk often. We know that for sure.

This is pretty much a Crash game. - Tectal

Ok, I dunno but a great game haven’t played it

At this point, this is when crash bandicoot started to go down hill, it completely changed the characters, gameplay, moves and story, but I would rather play it than the new spyro

I really though this game was where Crash started to go downhill. I really didn't like how you just kinda explored. I always ended up going In circles. This game wasn't horrible but definitely my least favorite crash game.

A major improvement of Crash of the Titans, but still nothing much. I praise it for the gameplay, but the biggest problem is the amount of backtracking 6/10

A horrible game to play, would not recommend to anybody in the entire universe at all..

Ladies and Gentlemen, I present to you, Crash Boom Bang! A Crash Bandicoot spinoff game released for the DS in 2006 as a celebration for Crash Bandicoot's 10th anniversary, AND WHAT IS EASILY ONE OF THE WORST GAMES I HAVE EVER PLAYED IN MY ENTIRE LIFE!