Best Filipino Films of All Time

Brilliant... Nora Aunor in a role of a lifetime.

It Takes a Man and a Woman is a 2013 Filipino romantic comedy film directed by Cathy Garcia-Molina. It is the third and final installment in the film series, A Very Special Love. The film was produced by Star Cinema and VIVA Films and released on a Black Saturday, March 30, 2013. Sarah Geronimo and John Lloyd Cruz reprise their roles as Laida Magtalas and Miggy Montenegro respectively. The film received overwhelming reviews from critics and fans. The film was a huge box office success, it set and breaks box office records in Philippines. The film is currently the highest grossing non MMFF film, the highest grossing Filipino romance film, the highest grossing Filipino film of 2013, and the highest-grossing Filipino film of all time when it comes in total gross income. Due to the film's massive success, the film's theatrical run was extended.

Sarah and John Lloyd are the only major stars in this film. It means to say they carried the movie. The new Toni and piolo movie has Iza calsado plus Lani m sing the theme song. Three parts of a romantic movie shows how much the people love the tandem.

It grossed more than 500 million pesos in total.

A perfect ending of the sequel... 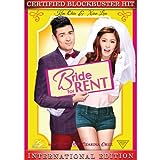 This Guy's In Love With you Mare! Is a 2012 Filipino comedy parody film under Star Cinema and Viva Films. It stars Vice Ganda, Luis Manzano and Toni Gonzaga, and it is directed by Wenn V. Deramas. The film received mixed reviews from Filipino critics. It currently holds the title of the sixth highest-grossing Filipino film of all time.

Sisterakas is a 2012 Filipino comedy parody film produced by Star Cinema and Viva Films and selected as one of the eight official entries to the 2012 Metro Manila Film Festival. The film was released nationwide in theaters on December 25, 2012. The film was directed by Wenn V. Deramas and stars an ensemble cast including Ai-Ai Delas Alas, Vice Ganda, Kris Aquino, Kathryn Bernardo, Daniel Padilla, and Xyriel Manabat. The film broke box-office records in the Philippines upon its nationwide release in theaters. It now holds the title of the second highest-grossing Philippine film of all time.

Seen it 5 times in theater & 20 times & counting in my living room after buying my own copy.

I really think the movie was awesome,for me any movie by Kim chiu and xian lim is really the best,no doubts about it.

The Unkabogable: Praybeyt Benjamin (English: Private Benjamin) is a 2011 Filipino action comedy film starring Vice Ganda, Derek Ramsay and Eddie Garcia. It once held the title of the highest-grossing Filipino film of all time, until it was surpassed by the 2012 Metro Manila Film Fest entry, Sisterakas.

The Mistress is a 2012 Filipino romantic melodrama film directed by Olivia Lamasan, starring Bea Alonzo and John Lloyd Cruz. The film was also well acclaimed by people and received mostly positive reviews from the critics, and sets a box-office record in the Philippine Cinema. It currently holds the fifth highest grossing Filipino film of all time. The film was also screened internationally in select countries. This film also celebrates the 10th year anniversary of John Lloyd Cruz and Bea Alonzo's partnership as a love team. Alonzo and Cruz also had their newest T.V. show entitled A Beautiful Affair that aired (October 29, 2012 - January 18, 2013) in ABS-CBN, is also part of their 10th year anniversary as love team and also the success of The Mistress.

What is it doing at number 26? This is the best historical movie in the Philippines along with El Presidente.

And Tanging Ina N'yong Lahat (English: The Only Mother To You All) is a 2008 Filipino comedy film starring Ai-Ai de las Alas and Eugene Domingo. It is the sequel to a 2003 comedy film and Tanging Ina. It was released on December 25, 2008 as Star Cinema's official entry to the 2008 Metro Manila Film Festival. The film grossed a total of PHP 197 million, until Star Cinema's You Changed My Life (recently became the "All Time Box Office Hit in the Philippines") beats it recently as of April 2009 with Php 229.96 Million pesos in total gross. Ai-Ai de las Alas reprises her role Ina Montecilio, Eugene Domingo as Rowena, Carlo Aquino as Tri, Alwyn Uytingco as Pip, Shaina Magdayao as Seven, Serena Dalrymple as Cate, Jiro Manio as Shammy and Yuuki Kadooka as Ten-Ten.

Unofficially Yours (stylized as ÜnOfficially Yours) is a 2012 Filipino romantic film directed by Cathy Garcia-Molina and starring John Lloyd Cruz and Angel Locsin. It was produced and released by Star Cinema. The film was released domestically on February 15, 2012. It was third highest grossing Filipino film of 2012 and currently holds the eleventh highest grossing Filipino film of all time.

No Other Woman is a 2011 Filipino romantic drama film starring Anne Curtis, Derek Ramsay, and Cristine Reyes. The film is notable for breaking box office records in the Philippines. It currently holds the title of third highest grossing Filipino film of all time having grossed P278 million but was dethroned by the 2012 Metro Manila Film Fest entry, Sisterakas. The film was also screened in select cities internationally. Though regarded as one of the memorable romance-drama movies for Filipinos and the second highest grossing Filipino film of all time, the film received mixed reviews from local film critics. Critics criticized the weak ending of the story line which is strong especially at the middle part but praised the film for memorable one-liners and the values in the movie.