Gaming Consoles With the Best Controllers 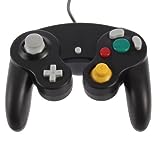 The only flaw of the Gamecube controller is that the buttons aren't the most responsive..., but it's amazing in every other category. It's comfortable, it's unique, and it looks great.

It's the best for these reasons:
1: Perfect size
2: Perfect shape
3: Light as a feather
4: Just the right amount of buttons
5: No need to worry about battery power.
That being said, the Wii and Wii you controlers are highly underrated.
This should be compatable with any gaming console, even those that aren't Nintendo.

Every future Nintendo console should be compatible with this controller.

Everything was pretty much perfect from Analog sticks, triggers, button shape/ layout and the overall weight and shape of the controller.

The dual shock is good, but for people with large hands (like me) the Xbox controller is perfect for that. It's comfortable, and easy to handle, enough said.

I personally like Xbox360 better because it has better games, ( Halo Gears of War etc. ) I also like the controllers better. (That's just preference). Xbox Wins!

This just beats the Gamecube controller! I must of spent hours and hours using these controllers they are the best.

It has a really good feel... wait aren't all PlayStation controllers pretty much similar?

I grew up using this kind of controller, so no doubt this is my favorite. It's just so natural. PlayStation has more and better games too (Uncharted, Resistance, LittleBigPlanet, Ratchet and Clank, God Of War, Killzone, Dark Souls, inFAMOUS). I dare somebody to make a list this long about Xbox. You couls for Wii, though.

I still don't see why people think it's too small, I think it's a good size.

Plus, why do people keep complaining about the shapes on the buttons? Sony was going for something new, and they shouldn't be shamed for it!

Don't see why people complain about this one. I've got big hands and long fingers and this controller is a perfect fit.

Take all the comfort and great design + look from the ps3 controller, and multiply it by 10.
This one is honestly better because of it's size, and how it doesn't have those stubs for handles. One of my favourites. Definitely.

I still to this day after trying most controllers, love this game pad's mighty grip. In terms of comfort non come close.

Out of all the controllers, I find this one to be the best. It feels comfortable in the hands and it's practical.

Only issue with this controller is the loose R2 button.

The great thing about the Wii U is the wide variety of controllers. You've got the gamepad which is clunky but surprisingly great, the Wii Remote for motion controls and backwards compability, the Pro controller that resembles Xbox, and even Gamecube for Sm4sh.

Finally replaced Gamecube as the best controller of all time.

What the heck are PlayStation controllers doing up there? Those things suck. PS3 and PS4 controllers are literally painful to use.

The Gamepad may be huge, but it's a REALLY comfortable controller. It fits into my hands perfectly and the build quality is incredible. I just wish the Joy-Cons had better build quality.

Its controller has a screen you can play your game on. How has no one already added this. It also has the Wii U Pro controller, which not only looks totally cool, but makes up for the fact you can't use the GameCube controller. The only downfall to it is the 2nd joystick is above the buttons. If it were the other way around it be just like a GameCube controller and absolutely perfect.

I voted for the Wii Controller because of the many different ways to play games on the Wii.

Its nice to experiment with different controls and finding what you are most comfortable with.
Some games require a certain set up and when they do they usually make great use of the controls.
One of my favorites :)

You gotta admit how innovative and unique the Wii remote was for its time! Yeah maybe it's a bit annoying having to actually care about your own health to play games, but it's still great.

While the Eye Toy and Kinect tried to have your whole body involved, the Wii Remote + and Nunchuck used your hands only, which was all that was really important, while also having buttons and Analog Sticks for other features.

A great control shape for motion sensor, if the motion sensor isn't good enough about you, get motionsensor plus. Of course ninitendo did go down the risky path by making it look like a phillips cd-I controller. But this is much better

Old but famous: just one D-pad, two buttons, and select/start buttons, but today along with it's own console it deserves to be part of the 80's famous culture.

It's a simple controller with a D-pad and two buttons.

It's simple and unique

Man! The controller has a Z button which is so cool, plus using a rumble pak's great!
P.S.- I don't have a n64, I play using an emulator and I use a Frontech Gamepad. But, I still experience the vibrtions on my gamepad and surely ng4's the best. It had to be 1st in the legendary consoles list. Go N64!

The moment I held it I had no idea how to hold it. It's downright confusing..., but a classic nevertheless.

For a console that introduced something new the N64's controller is awesome.

Um why is there 3 prong things? Was this controller made for aliens?

Dang, seems I got into gaming too late. Now the only company making cool controllers is Nintendo. Oh well, I prefer Nintendo titles anyway.

Has a screen, and the dreamcast gets bonus points for releasing a keyboard and mouse for it.

Dreamcast is the best It's got great games such has Sonic Adventure 1 and 2, the controller has a screen and the console looks amazing

It fits comfortably in the hands AND it's wireless!

How is this so low?!? The buttons are sleek the dpad is massively improved triggers are totally silent, and plus the Xbox turn on button is awesome

Not the same controller as 360 and has better graphics than console I have played, great first person shooter and fighting games such as killer instinct

This controller is exactly the same as the 360 controller. Just that it has a rather 'improved dpad'

Comfortable to hold, simple to use for even those who don't play games all the time, and the buttons are in all the right places. What's not to love? Sure, it may not feel as responsive as today's controllers, but Nintendo certainly got it right when it comes to simply picking the gamepad up and blasing through the feel of game controls.

The lack of a grip concerns me but fine.

Best controller ever 10/10 but seriously, why is Gamecube and Dreamcast so high?

The S controller is one of my favorite gaming controllers ever.

Except that the controller is terrible.

You can plug a Colecovision controller or a Sega Genesis controller in the 2600! It actually works!

The joy-cons, while faulty, are AMAZING when they work. And the Pro is even better

Hands down best controller to ever be made.

Never played on one but NICE DESIGN! They should have controllers like these nowadays! Better than the xbox controller where you have to have abnormally large hands to play with it!

The 3D Controller is easily one of the best; comfortable and sleek with responsive control.

This thing was totally meant for sm64 ds. Now you can play it without using the dpad or the touch screen. Basically everything you need is in there

Well the controller IS the console..., but it's great!

Why does this exist