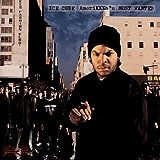 Death Certificate is awesome and a classic, but this is one of the best albums of all time.

Classic lyrics first of his solo albums this is true rap

You can't fade me puts this above death certificate for me

So many good songs that keep you entertained for the length of the album. Even if no vase line was not on this album it would still be pretty damn good. Great songs like givin up the nappy dug out, steady mobbin, the wrong to mess with and true to the game. Shout out to the predator which is also a pretty great album, but to be honest aren't all his albums good listening value. I think so even the worst have good moments.

Love this album! It's my favorite ice cube studio album. With singles like Today Was A Good Day and Check Yo Self (remix) How can this not be a hit!

I can't decide this masterpiece, the predator and death certificate (I didn't like Amerikkas most wanted at all)

I love this album don't know why all the hate a lot better than most in my opinion, but I also love Ice cube

I love the stories.

In my opinion his best version of "todays/new ice cube"..also in my opinion best hip hop album along with kamikaze by eminem