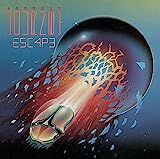 Don't Stop Believin', Stone In Love, Who's Crying Now and Open Arms are all on Journey's greatest hits album, and are undoubtedly four of their best works. Also, Mother, Father is my all time favorite Journey tune.
E5C4P3 is their only album to make it to number one, and it does deserve that position, and also my vote.
This is also Journey's first album with pianist Jonathan Cain!

The Album mostly written by Cain, Why didn't they keep him as the lead writer after this amazing album? Nothing in there library tops it!

This album might be called somebody's guilty pleasure, but I don't think pleasure should ever be guilty.

This masterpiece deserves the first place. I love many Journey albums but Escape is unbeatable classic

Powerful music-- emotional-- full of feeling. The public bought this album and drove the songs to high on the charts.

Journey were never rocked harder than in this epic 1983 album!

This album should be ranked higher... Hit after hit.

The greatest songs of all time are right here!

This was when Perry first joined Journey; the lineup was fresh and eager to go new places musically. The results are indeed magical, and overall they exceed everything more pop/synth oriented they came out with afterwards. Infinity doesn't get the credit it deserves as their best album simply because they weren't quite as well known when it came out. This one, ladies and gents, is a classic!

Steve Perry never sang better than he did in this album, making it a clear winner, escape is close though

Absolutely their best work. Every song on this album is an unquestionable testimony to the talent of Steve Perry. His long absence from music and performing has been a great loss to the music world and all his devoted fans around the world. I constantly play this particular album, because I miss "The Voice" so much.

This album is definitely my favorite. The songs are wonderful, and Steve Perry's performance has an emotional depth that is memorable and soulful.

Really disagree with Escape being the greatest Journey album. It's number one because of the top ten hits it produced without a doubt. But song for song Evolution is arguably one of the most brilliantly written rock albums regardless of any other definitions. This should be a clear number one.

No question Journey's Evolution is their most consistent record they ever made thanks to the producer extraordinaire Roy Thomas Baker who worked on several Queen albums. Well blended songs that absolutely rocked and a record that when u put the needle down gets better as it goes along!

Every song on here is very good at least, most are great. To me easily the best album they made.

Not the most hit songs, obviously, but still their best album from beginning to end.

Departure has the best album cover of any band ever! Mouse & Kelley outdone themselves on the art! Also best song with "Any way you want it"

My favorite journey lp. I had the 8 track and cacett and cd. Love it... Really miss Steve Perry. Not bought a cd since he left.

Escape loses because open arms is on it. Departure doesn't have a bad adding on it.

Solid throughout. "I'm Cryin" demonstrates the peak of Schon/Perry interplay.

Best live CD ever recorded, in my opinion. Perry hits every single note clearly and precisely, Schon's playing is great, and the interaction between the band and the crowd is amazing. Overall, my favorite Journey album!

Such a great live album, puts all the rest to shame.

One of the best live albums ever recorded!

This is one of Journey's best works in my opinion. With love ballads such as "When You Love A Woman", "When I Think of You", "Easy to Fall" or "Don't be Down on Me Baby" or faster-paced rock songs like "Castles Burning", this album is classic Journey. And Steve Perry's magnificent voice truly soars in this album. This should be in the top 5.

I loved this album, because Steve Perry's voice seemed richer, more mature like a fine wine. His performance on "When you love a woman" and "It's the rain" was so emotional.

This is easily the best Journey album. Every song is a winner, the musicianship is first-class, Steve Perry's vocals are on fire and the mix is the best I've ever heard on any album

I loved the musical direction the band took on this album. Shame this was the last time this legendary line-up existed.

Escape is clearly the best ever but this one comes next. As far as progressive rock goes this one holds up well. Rolie is underrated seeing as how he was an integral member of Santana as well. Topaz is a fantastic track and so is Of a Lifetime.

The Contenders
11 Look Into the Future

Some good tunes on this - should be higher!

This album really got all the good journey stuff. I voted this because I want it to be recognized since it had songs that no others had