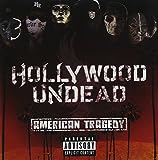 Along with NFTU, this album has some excellent story telling, and placing this album, New empire, and Swan songs has been a difficult one. There isn't much I dislike about this album at all. I guess all I can say is I love the majority of their songs, because there are very few HU songs I don't enjoy listening too, but I don't love the songs off this album enough to be the songs that come to mind when I think about the band... My favourite songs are Probably Tendencies, Been to Hell, Street Dreams, comin in Hot, lights out and Lump your Head. This ranks higher than DofTD because it's consistent, I think it's a good album throughout just not many songs that I repeatedly listen too.

Swan Songs is technically their best, but this record is my favorite. With stellar tracks like Been To Hell, Comin' In Hot, Levitate, Tendencies and Mother Murder just to name a few. Every song from this album is incredible. This record also introduced Danny, who in my opinion is wayyy better than Deuce. Please listen to this record and fall in love with one of the best rap-rock bands of all time

I love this album it has some of the best songs that the band have ever done on it, E. G Bullet, Hear Me Now, Been To Hell, Street Dreams (on the special edition but still amazing) and Comin' In Hot.

Absolutely their best. They were able to find the perfect blend of party songs (Comin in hot and Gangsta Sexy) and more serious songs (Been To Hell and Hear Me Now)

Don't get me wrong, swan songs is a great album with Undead, Everywhere I Go, Young, No. 5, City, Sell your soul etc. great great songs but Deuce getting kicked out, Danny taking his place, Danny is a great singer and put that with American Tragedy and Notes from the Underground songs which most of them are amazing, even though Undead is my favorite song but still I really like the new albums with Danny better than Swan Songs an I'm sure their new album "Hell is Empty Six Devils are Here" will be amazing too.

(Songs from the special editons/EP's included) Can't lie, Danny is obviously more talented than Duece and some of the songs on this album feel rather dated, especially the party ones. This doesn't make them any less enjoyable though. This album just has a good feel to it, songs like Paradise Lost, Pain and The Natives being stand outs.

Easily their best album, the only album from Hollywood undead where I can listen to every song without skipping. Deuce made this band so much better

I can't listen to any other HU album. The writing is poor but its fun. The writing on the rest of their albums is worse and cringe

3 Notes From the Underground

This is their best album In my Opinion... It has both a great mix of slower emotional songs, like Lion, Believe, Outside and We Are etc... And personally my favourite party songs, Up in Smoke, One More Bottle and Delish. This entire album is just consistently Great in my opinion, not good, great.

This album is incredible, We Are, Lion, New Day, From the Ground, Dead Bite, Medicine, Believe etc. these songs are incredible and Up in Smoke is so underrated, is a great song with Danny and Funny Man singing the chorus... Fantastic album.

This album showed their ability to mature and improve - not to mention my absolute favorite track by them, Outside, is on this record.

Full of meaningful, catchy, great instrumental, great vocals and awesome lyrics. My one favourite is We Are, but there is more.

4 Day of the Dead

This should be first or second, came back to their roots and added more musical elements.

Considering its one of their 4 actual albums, it should at least be number 4...

Seriously underrated by the HU community in my opinion... J3T sounds amazing in all of his versuses... And Funnyman's hook in Black Cadillac is always a great listen which I wish they would do again. There isn't really a song I skip in this album, maybe besides Ghost Beach as I cannot really relate to it in any way. I honestly just feel like they hit a really good mix with the rap and heavier elements in this album, while the party anthems feel slightly maturer, but not too mature. Maybe the one issue I have is the slower songs on the album lack that emotional punch which their earlier albums had with their counter parts. Despite that this is one of the albums with songs I just keep coming back to.

Such a wide variety of songs, should be higher!

Now this is actually a HU project I don't think is worth listening to, the few songs on this EP are bad to average at best, with songs like Immigrant Song being awful listens. I guess the only thing I really enjoy at least a little is El Urgencia but even that isn't anything special.

( I don't count this) So I would actually put this above Desperate Measures as I actually enjoy the songs. I just put it lower as, unless I'm mistaken all the songs on this EP just became a part of the Swan Songs special Edition.

Finally deciding to ditch the masks and reduce the party anthems (at least for now). Probably a good thing as they are getting older. This album is at the middle of the list because, although I love the songs Heart of a Champion, Empire, Nightmare and Already Dead, the album is just lacking Funny Man and after the incredible Black Cadillac and enjoyable Cashed Out, Killin it is a bit of a let down. The quality of story telling in their albums have also been dropping and it shows in this album. Also not a massive fan of the features, Breal worked out in Five because they were going for a different song style but I feel like the features in this album weren't really needed... But that's just my opinion, they did a good job, just not for me. However the songs I like in this album I really do like... Definitely Jdog's album this time around.

Man this gotta be the best album in whole I've heard. Go listen to it, it's far better than everything above combined.

Firstly, great title for an EP, just wish it was an album, and that is mainly why it's so low, because I enjoy every song on this EP, there's just not enough for me to put it higher. Honestly with Jdog's screaming, mixed with the dark and heavy instrumental, Bloody nose would have fit very well on New Empire. Something to Believe would have also fit well, because of the effects on J3T's vocals (although they are more subtle in this song, than in something like Empire). Where as Gotta Let Go, Live Fast Die Young and Another Level would have suited Five as bonus tracks for a special edition. At first I didn't enjoy Another Level, and I can't say it's a great song but I absolutely love J3T's verse and the beat behind it. I guess I just feel like Psalms didn't need to exist even though I'm glad it does as I love the songs.

(I don't count this) Again I would also put this higher than Desperate Measures as I actually enjoy the songs but because these songs also just became a part of the Swan Songs special edition, I've put it lower