The Top Ten
1 Epic - Blood on the Dance Floor 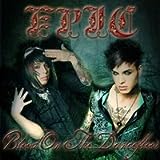 LOL, they revealed the true meaning of epicness (sarcasm). Blind Guardian should learn from them (sarcasm).

An epic fail, that’s what this album is

Yeah, she is better than Mozart and Beethoven (sarcasm)

In each of the three German speaking countries, "Axel F." was in the Top 3 (3 in Germany, 2 in Austria and 1 in Switzerland) and this was long before YouTube sent such videos viral. So yeah, hate all you want (it really isn't good), but they did have hits in Europe.

Why didn't they give Sweetie Pie Bird as much fame as The Crazy Frog.

Well this must be a awful fortune then

5 Save Rock and Roll - Fall Out Boy

If this is how they saved Rock and Roll, then I wouldn't ask them save my life.

But honestly, it isn't a pop album. It's more alternative.

The Now That's What I Call Music! series always has horrendous songs so this series definitely is ironically titled.

At least they're popular.

Well it describes the album perfectly

But it doesn't have a purpose at all

Like Tony Iommi Said:
This album should be forbidden

This is very sad irony: Melanie Thornton died in a plane crash a few months after this debut solo album was released.

But the album isn't trash it's very good plus it contains Poison his best song.

They sure took a Risk alright at making Pop Rock songs

But this is a good album

Then what are you?

But its not a Power Metal album

It's Not their 3rd album it's their 11th - christangrant

19 The Best Song Ever - One Direction

Not an album it doesn't belong here.

Their only album (also one of my least favorite ones of all time).

Hartz IV is money that people with no income get in Germany. The album was a commercial disappointment (even though arguably one of his best records).

LOL, this a good one - a final album named Comeback, LOL

This must be a bad magic then

What makes this ironic is that Tom Araya is catholic