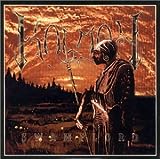 By far their best album. I wished they carried this approach in their following albums. They Will Return was wonderful as well but everything after that went terribly wrong.

You have once said from Something Wild to Follow the Reaper, Children of Bodom's first three albums are all some of the best of melodic death metal.

Now you say everything went terribly wrong with Kalmah after their second album They Will Return.

Why do you claim to like Kalmah so much more than Children of Bodom when (according to you) they made 2 and 3 of the best melodic death metal albums, respectively?

Such a good follow-up to Swamplord. Beautifully crafted album unlike the next one that followed.

Not good at all. A very disappointing album. I never understood the hype regarding this bland album. The production is atrocious, and all the riffs and solos are devoid of feelings (barring Bird III Omen), feels like I'm listening to an underground death metal album. My ear hurts every time after listening to this album, because of the buzzing noise..Awful album from an extremely skilled and competent band.

I love this album the most. The deep vocals and the heavy guitars make every song heavy and awesome. It's probably the only record by Kalmah which is "really" Melodic Death Metal.

Just sometimes it feels a little monotone though.

This album shows a change in their style. They have developed so much as musicians, listen to the song wolves on the throne.

This album is really good from front to back. It's a shame that it didn't garner much attention. It's their strongest release after Swamplord and The Black Waltz.

This is such a grower - give it some time and don't judge it immediately right after the first listen. Palo has a lot more to offer than your average metal album.
Evil Kin, Waiting in the Wings, and Through the Shallow Waters are my favourites off the album.

I'm purchasing this album, it's such a great album.

People.. This album is as awesome as their previous ones. Personally I love Swamplord and For the Revolution the most. Each song is just great, it is so underrated album.

I can definitely say that's a genuine opinion and not based on popularity like 90% of the lists and rankings out there.